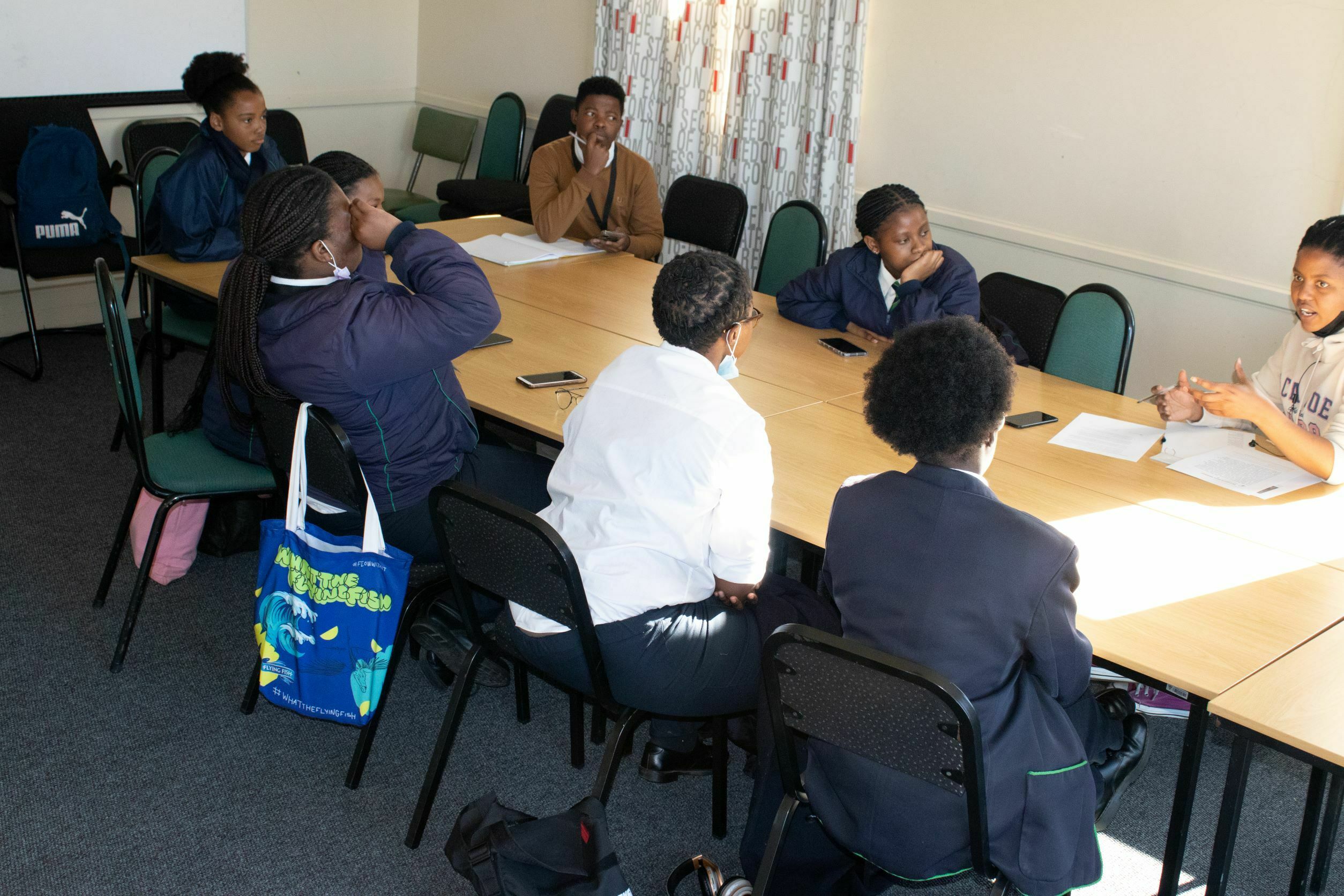 Journalists from VG Cue and Grocott's Mail engage with each at a Rhodes School of Journalism and Media Studies seminar room this week. Photo: Likhapha Thaathaa

Last weekend, the world awoke to the devastating news of 21 children who had died in Enyobeni Tavern in Scenery Park, a disadvantaged part of East London. EC Safety and Liaison spokesperson Unathi Bhinqose said the children between 13 and 17 years old indulged in a night of ‘groove’ to celebrate the end-of-term ‘pens down’. Underage drinking was in the mix.

Forensic experts are working around the clock to determine the cause of the fatalities. The SAPS has expressed concerns about rumours circulating on the cause of death. “We urge people to refrain from making risky assumptions which do not assist our investigations,” Lt Gen Mene said

The underage clubbing and drinking at Scenery Park was not an isolated incident. Teenagers from several Makhanda high schools – including a group of six Victoria High School learners working on Cue over the Festival – told Grocott’s Mail that this behaviour is a common generational ‘affliction’.

Why do you think underage drinking is so prevalent in South Africa?

“I guess if you are impoverished, it just built into the culture, it’s pretty expected for you to drink at a younger age. And if you are wealthier it’s going to be less of a problem, but like you still going to drink a little bit while underage – and if you have alcoholic parents and are born into such a system, its inescapable.”

“Children drink because they have problems too, so they do what adults do, they drink them out – it is also because of peer pressure, sometimes it’s just for comfort from unpleasant home situations.”

“Well, it is because of the evolution of generations; our parents drink, so in a way, they have influenced the children to drink too. Children can find alcohol in the house and start drinking; also parents didn’t speak up earlier about their children drinking. This is also because our generation doesn’t feel they have a safe space to offload their problems, as our parents don’t have a close relationship with them and can not relate and respond well to our issues. So, we turn to alcohol as an escape to offload and have some fun – this is also why there are so many suicides, we don’t feel heard or understood by adults.”

What do you think can be solutions to this, and do you think Life Orientation effectively educates youth against drinking?

“I don’t think it does, I don’t even think the schools take LO seriously enough; I also think education is important for self-empowerment, that could be a solution”

“Part of the solutions could be banning alcohol advertisements from being seen by under eighteens because the adverts are very influential and enticing – but because many children are raised by the internet there is no escaping them so there isn’t a solution, other than self-discipline from children. Maybe the LO curriculum can be designed like the adverts are designed – the adverts speak to our current reality as this generation of young people. They are relatable and influential. Life orientation is in itself very problematic; it doesn’t speak to our generation. Even the exam questions can be archaic in their nature. Young people should be in the room when the LO curriculm is developed.”

Underage drinking has become the norm

Young people use alcohol as a coping mechanism because they feel it is a way to escape boredom, difficult home situations, and depression. Another contributing factor is peer pressure. Teenagers have a way of influencing each other’s decision-making and behaviour; these decisions often lead to the intake of alcohol at a young age.

Yes, I believe parents can be good role models for their children. From what I’ve seen in my social circles, religious values are taught, and educational support is practised daily by our parents. Of course, they are not perfect at parenting, but that is only because there is no guideline for parenting, so they are bound to make mistakes, although it is their responsibility to learn from their mistakes and try to do better.

Unfortunately, underage drinking has become a norm in South Africa, a reality we can not escape. Our community has regularized drinking by building taverns in areas where children are supposed to be raised healthily and safely. We no longer question people entering liquor stores by asking them to show their identity cards, and that is because it’s normal to assume that someone entering a liquor store is of age. That is where society failed us. Children found ways of dressing up to erase suspicion and started to live by that. It also goes along with how those young kids got into the Enyobeni Tavern.

Possible solutions are for parents and the community to look beyond the situation and find help to decrease further issues. For example, they could buy alcohol to sit and enjoy at home with their family, rather than restrict their kids and have them do these things behind their backs, which can have terrifying consequences. Or, instead, communicate with your child about the disadvantages of drinking at a younger age. Alcohol is a quick solution but not a lasting solution.

The teens agreed to disagree on whether or not the availability of recreational options in communities is a factor in the scourge of underage drinking. Some said opportunities are available, especially in Makhanda’s townships, but the youth are just not interested in joining societies and sports groups. They opt for going out and engaging in risky behaviour. Another said, “We don’t have good role models for engaging in recreation; for example, our national soccer team doesn’t even qualify for major games, so there is just no incentive. Sports are also very gendered and thus discourage youth who are keen to join clubs. For example, girls are expected only to be interested in netball and hockey and not soccer.”

According to the Liquor Act of 2003, selling or supplying alcohol to minors is illegal; the legal drinking age is 18, but multiple groups in South Africa are petitioning the government to increase it to 21, claiming that it will curb underage drinking.

Previous ArticleKAK: It’s scarily good sh*t!
Next Article How to spot the narcissist before they destroy your life