Piecing together trauma for healing 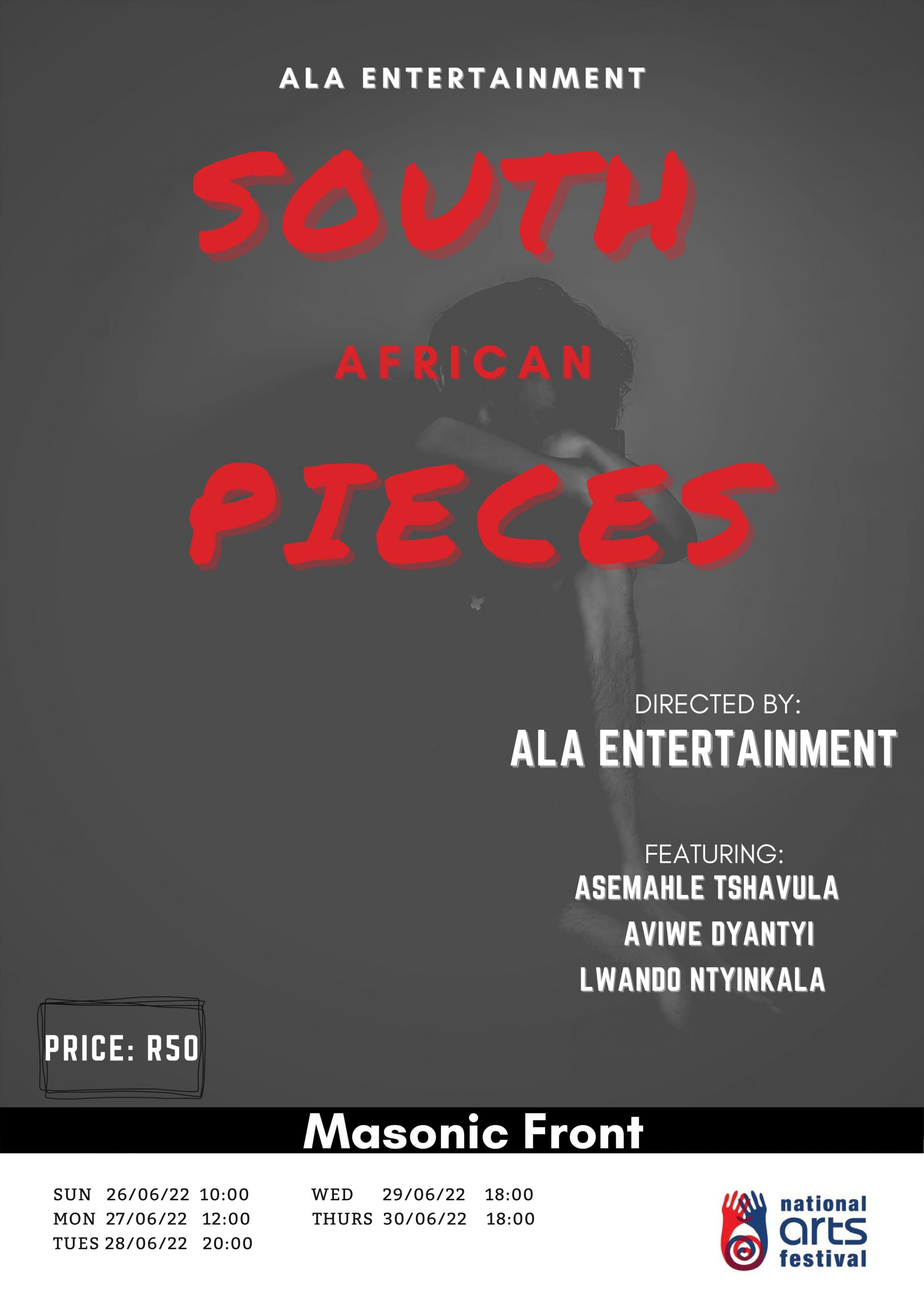 The official poster for ALA ENTERTAINMENT’S South African Pieces. The Makhanda-based production tackling violence in South Africa can still be seen until Thursday, 30 June. Source: Supplied.

To the left, a man could be spotted standing, eyes closed on a rostrum, hands rung around his neck. Placed centre stage is a man in a wheelchair, head drooped, eyes closed and dressed in a white-and-purple signature Rhodes overall. The lights fade. A third actor appears dressed as a priest, clutching a Bible. “Where is this play going,” I wonder.

South African Pieces was first performed in 2017 at the Makana Drama Development Festival (MDDF), where it won runner-up. Today it graces the outskirt stage, Masonic Front, during the 2022 National Arts Festival. Inspired by actual events, the piece explores different manifestations of violence so potent in South Africa. There are references to child abuse, domestic violence, human trafficking and even the effects of the Marikana Massacre on the mining community. Whilst tackling these topics, the cast aims to bring hope and healing to victims of similar traumas. The Makhanda-based trio of actors, Aviwe Dyantyi, Lwando Ntyinkala and Asemahle Tshavula, are the architects behind the production and directors of the company, ALA ENTERTAINMENT.

Praise must be given to the passion of the cast. Despite having two audience members, the absence of a packed theatre was not felt. The three actors gave the performance their all. The piece’s energy, the embodiment of movement and the ensemble work were strong throughout the 40-minute run. The use of space was well planned and created a versed space for the trio to perform.

However, if not handled correctly, passion on stage may manifest in melodramatics. A production that tackles violence is expected to stir much anger amongst the characters. As we all know, anger is articulated on a multitude of levels. Some people act ominously cool and collected; others are like a bat out of hell. This includes other emotions such as joy, excitement, or anxiety. However, it felt that within South African Pieces, there was only one mode set to emotions – an all-time high. As a result, the work felt over-acted, leading to messages being lost in theatrics.

Additionally, the lighting on stage could have been better thought-out. To accompany the white stage lights, a red light was used. However, the red hue remained in both heavy and more light-heartened scenes, thus lessening its effect.

With more time dedicated to crafting the production, South African Pieces has the potential to be an interesting vehicle to explore its message.

Previous ArticleThe Long Table: Fest’s warm heart and satisfied belly
Next Article The truth is all that matters