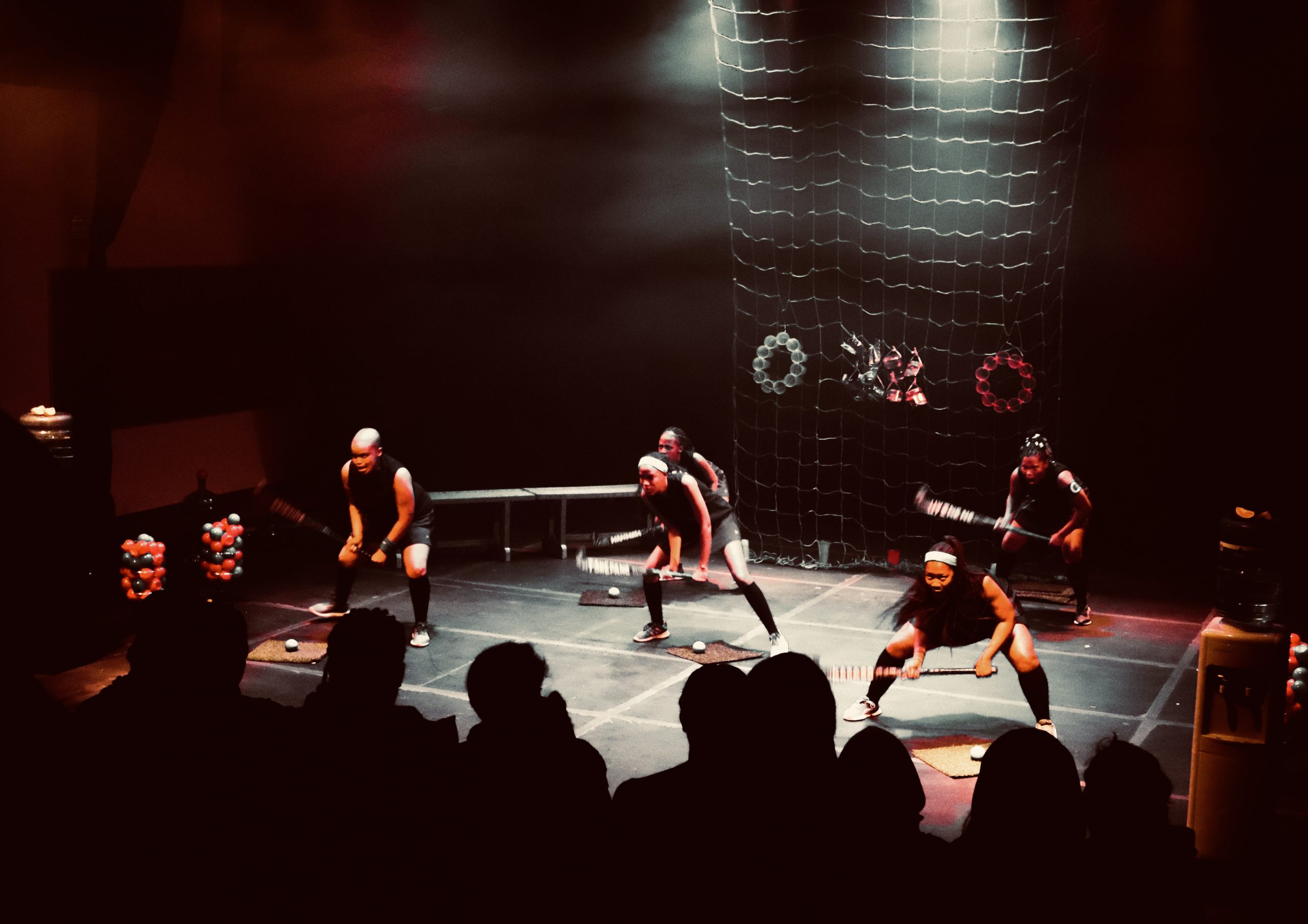 Down the stairs shouting their war cries, brandishing their hockey sticks, they enter the arena psyched for the battle. The arena, in this case, is the floodlit stage where our five contenders jostle and dance, full of fierce bravado as they ready themselves to take on the redcaps.

The poster, the name, the props and the costume all point to Whistleblowers being about women’s hockey, women’s, where a certain butchness is expected. The AFDA students give it their all, creating the distinct impression: do not fuck with us.

The set-up, including the intermittent appearance of the coach and referee Quintijn Relouw, who directs this play along with Rob Murray, is intriguing. We going to watch a hockey game?

It’s a game for sure. The pitch is a flexible metaphor for life; here, it becomes a stage upon a stage as we glimpse insecurities, sexuality and the intertwining of the two playing out in an atmosphere of ambition and competition.

Whose rules, though? Here Relouw transforms, clowning himself into a priggish pig, the patriarchy a buffoon of the most dangerous kind; one with a whistle.

These young women rail against this power but remain powerless. The question is why, when they are more than them. A question with no clear answer, not here at least. But there is anger born of frustration at its evasiveness clearly expressed, along with glimpses of vulnerability.

Born out of fear, too. Fear of what men do, their unpredictability and capacity for violence. So many women killed, raped, mutilated, left for dead. We know their names, some of them, most we don’t or forget. They are all here, legions of our guilt and our ghosts, all murdered by men.

These five performers bring them to raging life, with the desire for vengeance only the living can give to the dead.

They are in your face, blood pumping through their veins. The energy is at cup fever pitch. This is a game that has to be won.

There are moments it threatens to become a shouting match, concentration was needed to follow monologues, or more accurately, in this case, deliveries, amidst the ambient noise levels, which were not coming from the audience of four they played their hearts out to.

There were also a few choreographic missteps on a rainy opening night. Still, conceptually Whistleblowers is sound, likely to stand out among the many plays at this National Arts Festival, tackling the pressing issue of men treating women as objects of no worth, objects to use and throw away, even if it means killing them and chopping up their bodies.

None of this is played out directly, yet the message seeps through, intermittently becoming louder and clearer.

It is a solid team, well directed with touches of physical comedy reining in the didactic, with imaginative use of set and wonderful touches of mask work.

With a bit of settling in and more focus on the text, Whistleblowers is a winning work.

Whistleblowers is on at 6 pm on 26 June.