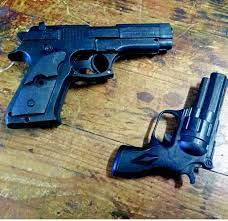 Realistic-looking toy guns were used in the attempted heist on Bathurst Street on Friday, 24 June.

Hi-Tec arrested two men’ armed’ with a toy gun after they attempted to rob a Bathurst Street business at 8.30 am on Friday, 24 June.

SAPS spokesperson Majola Nkohli said the owner and two assistants were held at toy—gunpoint and marshalled inside by the two men, aged 30 and 42, as they opened their shop for business.

“The owner managed to press a panic button to activate an armed response service of a private security company. The two men were arrested at the scene, and police were summoned,” Nkohli said.

Grahamstown SAPS confirmed that a preliminary investigation revealed that the recovered firearm was a toy gun.

The two men will appear in court on Monday, 27 June.

Hi-Tec reported on its Facebook page that six of its armed officers responded within minutes of the distress call from the business owner and surrounded the premises.

“When our officers entered the building, the robbers could be seen holding a firearm to one of the staff member’s heads,” Hi-Tec said. “Our officers deftly overpowered the suspects, forcing them into submission. The perpetrators had no choice but to surrender and were swiftly arrested. All the stolen cash was recovered, as well as the getaway car and firearm used by the offenders.”

Hi-Tec applauded its ‘Alpha Team’ and armed response and general manager Derek Richardson for their “tremendous response” to the reported incident.

The event was preceded by a Security Cluster parade on Church Square at a National Arts Festival opening ceremony on Thursday, 23 June. Hi-Tec officers and members of the Grahamstown Community Policing Forum joined the bulk of the 110 SAPS members deployed from six districts in the province to police the NAF.

Previous ArticleUnity in diversity
Next Article Ringo’s still got it