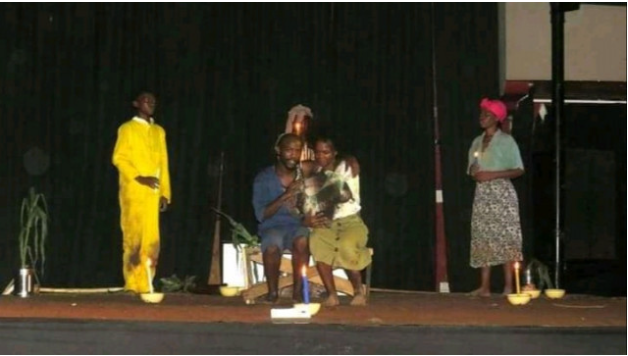 A scene from 'Nonhlanzeko'. Photo supplied.

African tales are slowly fading away as the current generation is not engaging with them. Technology and social media have replaced significant family time. It is rare to find families sitting around a fireplace with elders, sharing myths and fables without a cellphone screen outshining the sparks and flames of the fire. Children today would rather spend hours gaming or watching YouTube videos than engaging with this heritage.

Stemming from the township of Umlazi in Durban, Enthrone Productions has brought life to one of these myths through their production, “Nonhlanzeko”. It follows the story of a young couple working on a white-owned farm who must perform a ceremony to start their new life together.

Intertwining aspects of contemporary South Africa with historical fables, the isiZulu production bases its story on the myth of the rain curse. In this parable, a village experiences frequent drought because of the anger from the gods and ancestors. In one of the most poignant scenes, the sound of thunder boomed through the speakers, and the actors started crying and praying. Desperation and sadness were palpable as the characters prayed to the booming sounds.  Chanting and calling upon their different gods, they continuously begged for water. Echoes, movement, hymns, and ancestral chants rang out like a dream. For a moment, I forgot I was the only person seated in the entire second row.

The performers remained enthusiastic and stayed in character even through technical faults. The lights were down for some of the performance, an ironic fault in which people failed, again, a rich African history. But the show had to go on.

This rich story becomes muddled as it tries to depict scenes of sexual violence. As a loaded and sensitive topic, it needed to be dealt with on its own. Switching between the different issues, the show became too busy and diluted. They use the same actors for two different subjects, which might be confusing as you question whether they are still in their first or dual roles. Given the gravity of the subject matter, the show also could have benefitted from an age restriction.

It is time to take a break from modern entertainment based on technology and social media. Take time to watch Nonhlanzeko at Princess Alice and enjoy a vintage storytelling experience. Let us keep our African myths and fables alive.

Previous ArticleA warning, not a prayer
Next Article Live music at the Pothole and Donkey.