A warning, not a prayer 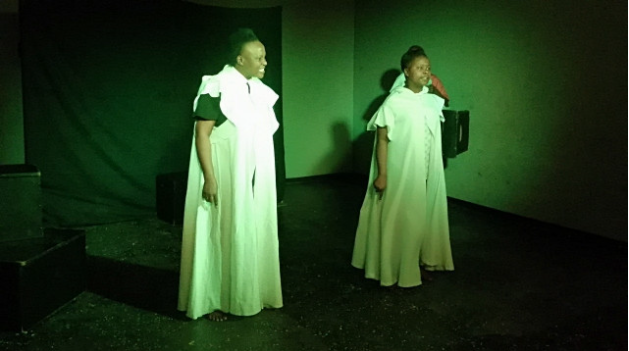 A scene from 'Conversation with God'. Photo: supplied

Six women in white humming. Deep sombre notes create a sense of anticipation and sadness. They start to sing and rage and despair as they express their disappointment at where they’ve ended up.

Conversation with God tells the story of three black women in purgatory demanding the ear of the Lord God Almighty himself. A prostitute, a prophetess and a feminist freedom fighter find themselves dissatisfied with their lives and form a movement speaking on behalf of black women. But as their endless day progresses, they question everything they thought they knew about God.

Other than what felt like the typical trajectory of black pain productions, in which black women are always depicted as victims of circumstance, the play struggles to communicate feelings despite dealing with gender-based violence and the struggles many black women face in post-apartheid South Africa.

While loud and energetic, the acting did little to garner our sympathy. It took a lot of focus to simply find fundamental tonal changes and meaning.

The actors had tears streaming down their faces and sweat dripping from their foreheads under the harsh lighting, yet meaningful emotion was not conveyed. The harsh lighting didn’t help, the orange cast swamping the set’s faded black and gold drapery.

The costuming was somewhat mixed: modern fashion for some characters, ceremonial garb reminiscent of the three witches of Macbeth and Greek mythology for others, the inconsistencies confusing the narrative.

However, the play is based on an interesting premise and had closer attention been paid to details, it could be a success.

Previous ArticleWaya-Waya: sculpting out of the wasteland
Next Article Fables of the past to speak to the present