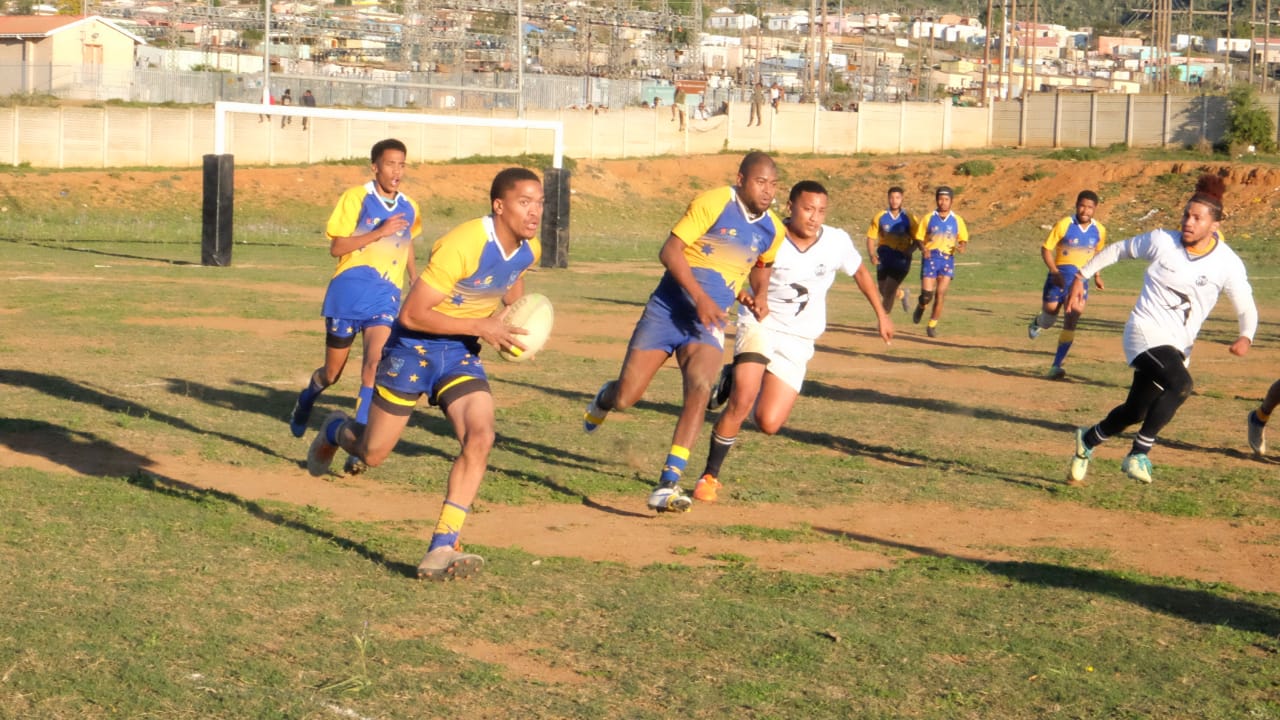 St Mark’s claimed an all-important 34-22 bonus point win against a defiant and determined Swallows side in front of a large crowd played on Youth Day in Alicedale on 16 June 2022. The home side ensures a decent 17-8 at the changeover.

The bonus-point win put St Mark’s back on top of the overall log standings of the EPRU Sedru Regional League, the position they occupied for most of the season. Achieving this was difficult as Swallows came out guns blazing and pushed the Bulls till the very end. It must be said that both teams entertained the crowd and kept them off their seats for 82 minutes. It was a match played in a fantastic spirit, and friendships were further forged between these two sides – a day that saw rugby end up being the ultimate winner.

The home side drew first blood in the eighth minute of the first half when the experienced Cameron Jewell dived through the defenders to score the opening try. The game continued to deliver brutal and physical contestation as both teams ran at each other. Swallows replied in the fifteenth minute with a penalty through the boot of Jason Hensen as St Mark’s led 7-3. Both teams made unforced errors for the remainder of the half and lost numerous scoring opportunities. The home side scored two more first-half tries in the form of Cameron Jewell and Yanga Jonas, while Jody Duiker dived over for Swallows to take the halftime score 17-8 in favour of the home side.

Swallows played some impressive running rugby in the second half but failed to put points on the board on the attack due to silly mistakes at crucial moments. St Mark’s, however, played with their bigger forwards and gained momentum, especially at scrum time and lineouts. Full-back Razeen Saterdag scored the bonus point try in the fifteenth minute of the second half, converted by Cayron Botha to extend his side’s lead to 24-8. Minutes later, Cayron Botha, collected a loose pass through a mistake by a Swallows player close to their try line – he neatly collected and dotted down in the right-hand corner. St Mark’s took a dominant 29-8 lead.

Swallows never gave up, gave the ball air with their number eight running from all angles, and put some storming runs in with the ball in hand. They were eventually rewarded after constant pressure when speedster Luciano September (wing) scored a fine try in the 36th minute, converted by Hansen. Bulls lead the Birds 29-15. Minutes later, powerhouse eighth man of Bulls Brian Buys (who is the leading try-scorer in the competition) probably scored the try of the day with a brilliant 40m try after collecting the ball at the back of the scrum and dashing down the middle of the field with a few defenders on his back who failed to stop him. Bulls 34-15 Birds.

A never-say-die attitude from Swallows saw replacement Apryian Morris score a classic try in the right-hand corner after a good interplay between forwards and backs on the stroke of full time. Hensen slotted the conversion as the siren went for the final whistle, handing St Mark’s a deserved bonus-point 34-22 win.

St Marks’s newly elected President Shaun Bruintjies was delighted with the match’s outcome and congratulated both teams on a great game of rugby. “The game was played in a very good spirit and entertaining to watch. We took home ground advantage and will take the win any given day, as Swallows was a good and tough opponent today. We, unfortunately, were the better team on the day, but full credit to Swallows, who pushed us until the end whistle. Both backs were good on attack, but our forwards made it easier for us up front, and we were the hungrier side on the day. There were hiccups at the back with loose balls that we did not properly control, but we rectrified our mistakes.
We must practice together more as a team, although it’s difficult as players are working. Our discipline was good in general, and we need to work harder for our remaining games. We are also planning many things as an Executive to strengthen the club,” Bruintjies said.

Swallows Coach Weston Du Plessis said, “The match-up between Swallows and St Mark’s was well contested. Swallows put on the pressure in the first ten minutes but couldn’t capitalise as the home team kept their composure on defence and slowly turned the advantage every time Swallows made unforced errors. In the early part, Swallows dominated in the lineouts while the St Mark’s scrum resulted in numerous penalties and scoring attacking play for St Mark’s.

“As the game progressed, the home team lineout jumpers gained the upper hand and put the visitors under immense pressure. Swallows had to play off the odd good ball as they kept making silly mistakes and the home loose forwards very dominant and from phase play, where their strong, bulky ball carriers were gaining momentum after momentum,” du Plessis said.

The Grocott’s Mail Man of the Match Award went to the powerhouse eighth man of St Mark’s Brian Buys. Buys was brilliant with the ball in hand and scored a scintillating 40m try while his ball carriers gained momentum for his team. He was also involved in a few tries, and his defences were also solid.