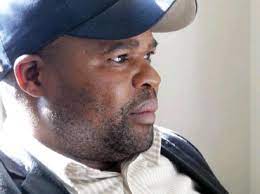 Jeff Budaza in an interview with Grocott's Mail in 2015. Photo: Wesley Gush

Tributes to murdered Makana Municipality Parks and Recreation manager Jeff Budaza are pouring in from devastated friends, colleagues and comrades.

Budaza was gunned down while closing the gate to his home in Extension 4 at 8 pm Wednesday, 25 May. Speculation is rife online that Budaza’s murder may have been politically motivated.

In an official statement, the Makana Municipality said it mourned the sudden passing of Jeff Bhudaza.

“The local Municipality Council and administration woke up to the very sad and shocking news of the brutal death of Jeff Bhudaza. May his beautiful soul rest in eternal peace!”

Bishop Mcuba conducted a short service with staff members at City Hall on Thursday, 26 May.

Details of the memorial service and burial will be released as soon as the municipal senior management gets full details from the family.

Budaza was one of Makhanda’s greatest football icons – and a successful coach of the Maru Football Club.

A friend and colleague, Makana Tigers FC chairperson Thandisizwe Matebese could not hide his sadness: “I’m still in shock and cannot believe what has just happened.

“The football family has lost a leader. It is especially hard for people like me who were very close to him. We started Maru together, and I learned a lot from his leadership skills. Even when I told him that I was starting my own team he encouraged me and gave me his blessings.

“I don’t even have words to describe the pain I’m going through.”

Former childhood teammate and current Rising Stars chairman Elvis Bill shared his memories: “We played together as young boys in a team called Strikers before Newtown City snatched him. He was a talented player with a great personality, and his passing is a huge blow not only to football but all sports in Makhanda.”

Another football icon Black Stars chairman Andile Mpulaniand was a former United Royals centre back who played against Budaza: “We have lost a true leader, and sport has lost big time, especially football. But, I would like to send my deepest condolences to the Budaza family, friends and relatives.”

“Budaza has done a lot for local football. The establishment of Maru FC brought the fire that our local football needed. The competition became tougher and tougher, which improved the level of football, and Maru became the team to beat. Budaza’s hard work is there for everyone to see as Maru continues to fly Makhanda’s flag high, and they are by far the most interesting team to watch. Budaza has done his best, and it will be up to those he has left behind to take the baton and move on.”

The Makana LFA sent its heartfelt condolences to the Budaza family in a statement.

“We wish to send our heartfelt condolences to the entire Budaza Family, his children, relatives, friends, his team Maru and the entire Makhanda community, which has been left poorer without the likes of Jeff Budaza,” the statement said.

“The Makana community experienced a severe shock when hearing the sad news of the passing of Jeff Budaza. He merged sport with education, stating that EduSport is critical for football development. We have lost a leader, thinker, poet, historian, lover of wisdom, and sports development revolutionary.

“He was firm when it came to ETHICAL LEADERSHIP on societal issues. The Maru FC and EC Sports Council family must be strong and take the baton and soldier on with the legacy of Mr Budaza.

“Thank you very much for being a classical theorist who wrote a football book which enlightened us. He was much appreciated for being a father to the fatherless. We salute you for being a role model in all sporting codes.

In an official statement, the Makhanda Parliamentary Constituency Office said Budaza’s death had sent shock waves through Makhanda and beyond “since ‘Giant’, as he was affectionately called, was a well-known sportsman who through sport played a tremendous role in shaping young talent in the city”.

The statement said Budaza was “a humble fellow who made a name for himself by being an outstanding footballer, a narrator of the history of football in Makhanda and a consistent principled human being”.

Budaza, a Rhodes University graduate, “connected the two worlds – Rhodes and his eastern side community where he hailed from. And that made him a great patriot and nation builder. We want to call upon the law enforcement agencies, SAPS, to bring to book those who have committed this atrocity and brought a dark cloud upon the city.”

In a press statement, the ANC in the Sarah Baartman Region said it was “saddened by the senseless killing of our dear social activists and an active member in good standing of Ward 6, ANC Lizo Nkohla Branch, Makana Sub-region Comrade Jeffrey ‘Jeff’ Budaza.

“Jeff was a social activist, dedicated to his craft, a loyal patriot who sacrificed a lot in pursuit of the development of his community.

“He pursued his passion within the sports fraternity and helped in nourishing, developing and shaping many young talents in Makhanda,” the statement said.

“We call upon the SAPS to do their work diligently and not leave any stone unturned in finding the perpetrators who committed this heinous crime and ensure that they are apprehended with the full might of the law.

“We, therefore wish to convey our deepest condolences to the Budaza family, friends, relatives, the sports fraternity, the greater community of Makhanda, Cadres of the ANC and other political organisations. May we all find solace in the knowledge that Comrade Budaza will always be our treasure and hero, inspiring us to work harder in making our communities a better place for all,” the statement said.