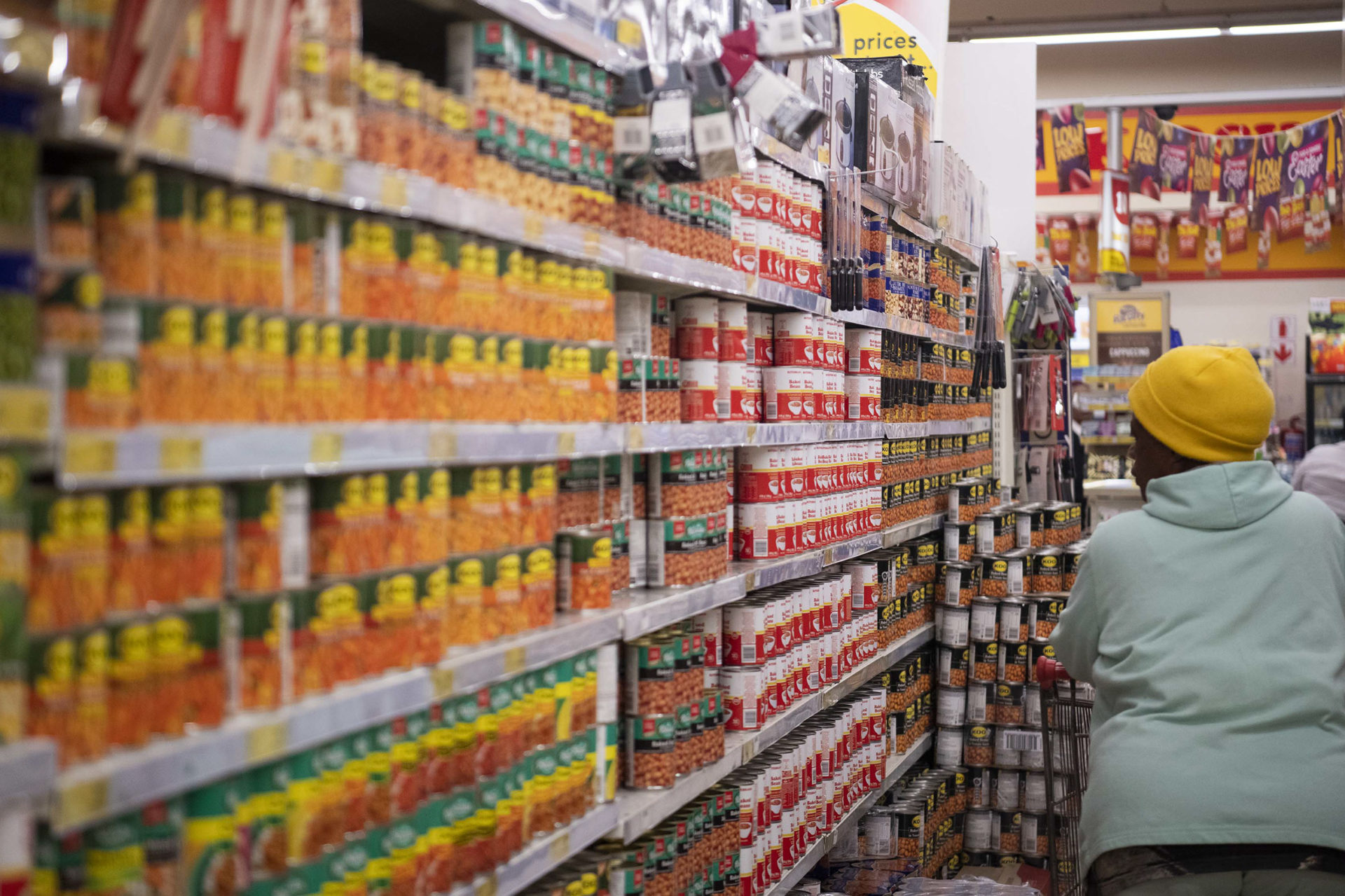 The rising cost of living forces many South Africans to cut out healthy food to make ends meet. Petrol price hikes, rocketing food prices and a looming electricity tariff increase have all added to the strain felt by a country with a record unemployment rate.

Mervyn Abrahams from the Pietermaritzburg Economic Justice and Dignity group (PMBEJD) says people are “prioritising transport to get to work, electricity, which is set to hike in June, and paying off debt as most people have to take out loans to stay afloat. Only after that do they buy food.”

The implication of having less money for food is that “people are cutting back on the amount of food they eat, and they are cutting back on the quality of food they eat,” says Abrahams. “People are eating starch because it’s filling them up. It seems like a good meal, but it’s missing those nutritional aspects. They prioritise what we have in our baskets as core foods, but now they can barely afford the core foods, so they buy rice or mielie meal, not both, some potatoes, some onions, cooking oil and some stock cubes or soup to give the food some flavour … If money is left over they buy the other foods, and that’s the nutritious food – your tin pilchards and fresh vegetables. So now people have dropped nutritious food because of affordability.”

The consequences for a nation consuming food void of nutritional value are devastating. It leads to stunting in children and premature death in adults from lifestyle diseases that could have been avoided had a more balanced plate of food been consumed from childhood onwards. According to Statistics South Africa, four of the top 10 causes of natural death – diabetes, heart disease, cancer in the digestive system, and hypertension – are directly related to diet.

According to the Heart and Stroke Foundation, life choices and habits, such as eating healthy food, can prevent an estimated 70% to 80% of heart disease and stroke. Ideally, a good diet contains fruits and vegetables, beans, low-fat dairy, whole fibre, whole-grain starchy foods and lean fresh protein. Each of these food groups has dramatically increased in price in the past few years. The cost of a 5kg pack of sugar beans has risen by 9%, from R158.76 to R173.20 between February 2021 to March 2022. Russia’s invasion of Ukraine has meant cooking oil prices have increased sharply – percentage changes for 2021 compared to 2020 registered a more than 80% increase in canola oil. Palm oil rose by 72%, and there have also been significant increases in rapeseed and coconut oil. South Africans can barely afford vegetable or sunflower cooking oil, let alone the healthier alternatives such as olive oil, which is already pricey.

The competition commission is looking into the fresh produce industry and its pricing. Abrahams says the PMBEJD welcomes this move, but the list of foods being investigated is too short. Products such as sugar beans are not being queried – and they should be.

The competition commission says it is essential that food prices remain accessible to all. “Price increases in essential foods can be more damaging to poorer consumers for whom essential foods shape a larger part of their consumption and household expenditure,” the commission says. “Access to healthy and nutritious food at affordable prices is of critical importance as the South African economy continues to struggle in the wake of the Covid-19 pandemic. The pandemic has presented challenges for global food security, affecting vulnerable households in many countries, and with impacts forecasted to remain throughout 2022.”

Activist Hlengiwe Gumede, 40, from the Children of Destiny at Home in Hammarsdale, KwaZulu-Natal, says it has become harder to provide a plate of food for the increasing number of people who have nothing to eat. “We provide freshly baked bread and vegetables from the garden, and we buy groceries for about 15 families in need. This has increased from 10 families because of the need in communities. We buy 10kg rice, 10kg maize meal, tinned beans, pilchards, oil, brown sugar, potatoes, and soaps to bathe and wash clothes,” says Gumede.

So far, the non-profit organisation is managing to stay afloat, but it is a struggle. “Money doesn’t take us as far as it used to, and we don’t have enough donations to feed more people. We have to turn away so many.”

According to a new report by management consulting firm McKinsey & Company, measuring affordability in middle to affluent families, 87% of consumers describe their finances as “stretched”, and of these, 13% say they are in crisis; 32% say they find it hard to make ends meet; 42% say they have to make adjustments. Rising prices affect the working class and impoverished the most.

Many studies over the years point to South Africa having a hunger and malnutrition problem. This was worsened during Covid-19 when the feeding scheme in public schools was closed, and about 9 million children did not have access to breakfast and lunch. In 2021 the Child Gauge Report by the Children’s Institute of the University of Cape Town found that stunting affects 27% of children in the country. Last month, the Daily Maverick reported that seven babies and toddlers had died of hunger in Butterworth, Eastern Cape, since January.

The Makhanda Circle of Unity Food Security Cluster (FSC) has been working to bring the issue of food security to the attention of decision-makers this year to support vulnerable communities. This is especially important in the lead-up to the next five-year Integrated Development Plan (IDP) for Makana.

We’ve developed an online ‘Food Security poll’ to consult with the community on this which will remain open until 30 April. If you have a moment now, we’d like to invite all Makana residents to participate in it using the link below:

It’s a critical time – and this is why:

👉 Unfortunately, 2022 will be a year of unprecedented food price inflation, supply and demand shocks and uncertain climate conditions. Food price indexes are at the highest levels ever and a global shortage of fertilisers is forecast to erode farmers’ profits pushing prices up further. In SA year-on-year basket prices have increased by 10.2%, far outstripping headline inflation. The average household food basket cost increased by R410.53 from R4,039 in March 2021. Social grants are tracking headline inflation (5.7%) not the CPI.
See here: https://businesstech.co.za/…/here-are-21-grocery-items…/

👉 Local government is developing a draft IDP and budget for the next 5-years, which is linked directly to the term of office for local councillors. Many people and businesses are still recovering from the COVID-19 crisis. We have an opportunity to call for plans to support social protection for the wider community and to ensure the prosperity of all. Access to water and food security need to be on the local agenda as issues that affect everyone. Both are closely linked to local economic, social and health outcomes and risks that impact on how communities flourish and sustain themselves over the longer-term.

👉 In response to the COVID-19 pandemic, we’ve developed our collective understanding of the issues. Many community leaders, businesses and NGOs with volunteers and community kitchens have pulled together networks to support food security. We have collectively held dialogues to identify ways to address the issues. These discussions have gained traction over the last 2 years. This is a window of opportunity to ask decision-makers to act. Ensuring sustainable access to water and food is part of local development plans is an important step to doing things differently and doing them better.

We are aware that councillors and authorities pay attention to signs of support for specific kinds of interventions. We’ve decided to bring this to their attention now, and are asking you to make your voices heard too.

We’re asking you to tell us what actions you think should be on the table within a food security agenda for Makana and to suggest your own ideas. The poll will be distributed via social media networks. It is anonymous and open to all.

The poll is intended to act as a starting point for a wider discussion that can inform decision-making, not the end point. It’s consultative rather than representative. The information in the poll can be accessed in multiple languages. Please do share it with your local networks.

We have already received several commitments that show that local leaders are paying attention to this, and the results will be shared openly afterwards in the public domain.

Gathering public input to inform local plans is aligned with the spirit of the Makhanda Open Government Partnership (OGP) process and with the Makhanda Circle of Unity’s role in helping to promote dialogue and convene civil society stakeholders in unity around local issues.

Consultation is of critical importance to enabling and empowering communities to participate as active citizens in the local decision-making process.

The poll asks you to look at a list of 15 actions. Each participant gets points or ‘dots’ as part of a ‘dot voting’ process to prioritise collective selections and decisions. Participants can also suggest other ideas to add to the list of items for others to vote on if they wish.

Please feel free to share the online poll with your local networks and encourage them to take part. We thank you for your participation.