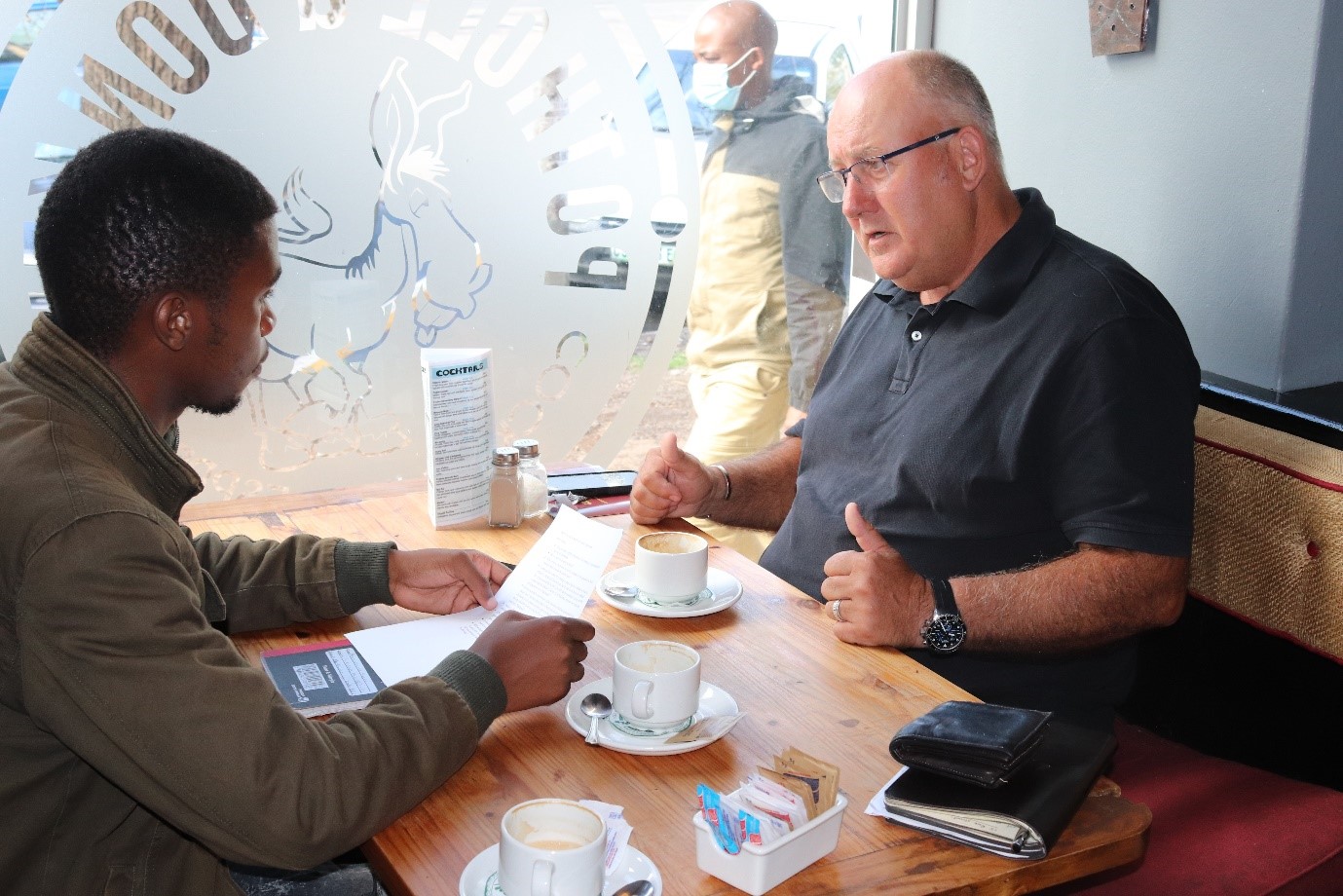 Siyamthanda Pongco (left) with Athol Trollip of ActionSA at the Pothole and Donkey. Photo: Sitampu Mthunzi

Newly-appointed Action SA Eastern Cape chairperson Athol Trollip was scouting for members in Makhanda last week. Trollip says his new party is opening new branches to target the transformation of local government before making a bid for power on the national political stage. SIYAMTHANDA PONGCO spoke to him.

Athol Trollip has over three decades of experience in the South African political landscape. He is a former Democratic Alliance (DA) Federal Chairperson and Executive Mayor of the Nelson Mandela Bay Metro.

But he is starting all over again by building his new party – Action SA – from the grassroots.

Action SA was established by former Mayor of Johannesburg Herman Mashaba soon after he left the DA. In the 2021 municipal elections, the party contested a limited number of municipalities, namely the Cities of Johannesburg, Tshwane and Ekurhuleni in Gauteng as well as eThekwini, KwaDukuza and Newcastle in KwaZulu-Natal. It won 90 seats in the six Municipal councils, including a ward in Newcastle.

Trollip said Action SA was building a solid foundation before the general election in 2024 and aimed to launch the party in the Eastern Cape by early May.

Trollip said that the party could not take on the whole province at once.

Mashaba started ActionSA by establishing the party’s influence in a few key municipalities and testing the waters before looking to “take over the country”.

Based in Gqeberha, Trollip decided that Nelson Mandela Bay and the surrounding municipalities, including Makana, would be his main focus before expanding to the rest of the Eastern Cape.

But, he said Action SA had been traversing the province of the Eastern Cape, from urban centres like Mthatha and Buffalo City to rural settlements, including Engcobo.

Trollip has strong ties to Makhanda – his children went to school here, and his son attended Rhodes University.

He says it hurts him to see the depleted state of the city. He said that corruption had ruined the city and continues to do so.

Trollip said he had “a soft spot for youth empowerment” and recognized the need to work closely with young people to mobilize them as active participants in the country’s economic, social, and political life.

Rhodes students Dagan Neser and Adrian February are already Action SA members – and they are vocal about student and community issues.

Trollip said the harsh reality was that all generations in South Africa had lost hope in political parties and were slowly losing interest in politics.

The Eastern Cape is tagged as ‘the home of legends’, but it is one of the poorest provinces in the country. The province has produced prominent and capable leaders, but many of them work outside of the region.

Trollip said youth should be encouraged to invest in towns like Makhanda.

He said Action SA was focused on local economic development and youth empowerment. He wants the youth of this province, including his two children, to know that they have a future here.

Empowerment will only come through uprooting the high levels of unemployment.

He said Makhanda is a historical hub – but it is economically and socially divided. Citizens need to come together to transform townships into suburbs.

“It may seem like an impossible task, but if we don’t transform township areas, there will always be a barrier that separates economically established parts of town and historically black, poor townships,” he said.

We have had decades of ANC government, but the township and rural settlements have yet to develop. Action SA is about action, not endless dialogues, he said.

“The Makana Municipality has failed to transform the township areas of Makhanda. There is no accountability in the local government.

“As soon as township people are economically stable, they move out of black communities into formerly white areas – and they recognize that as their transition. This has happened everywhere in the country,” he said.

But, do we need a new political party – don’t we have too many already?

Trollip said Action SA needs to show “it is not more of the same that has come before”.

The reality is that we need to change the current establishment, which has proven to be ineffective, he said.