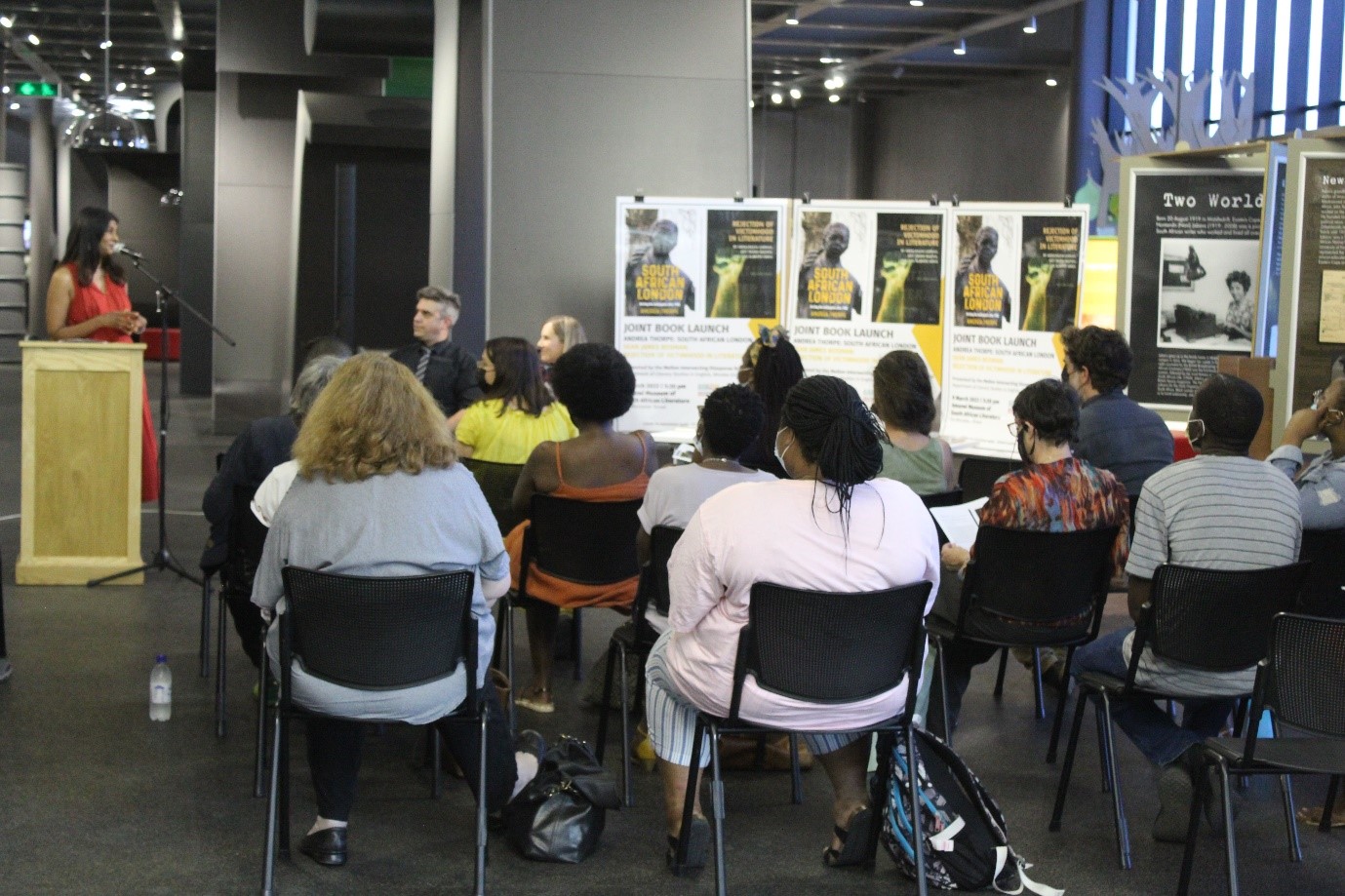 Two intriguing books by local authors about transnational writing were launched at the Amazwi South African Literary Museum this week.

Both authors – Dr Andrea Thorpe and Dr Sean James Bosman – are former members of the Intersecting Diasporas Group (IDG), a research group housed in the Department of Literary Studies in English at Rhodes University.

Speaking at the double-launch, the leader of the IDG group Prof Sam Naidu expressed her pride in the works of the two authors.

She said Thorpe had been an excellent fit for the IDG group when she joined as a postdoctoral fellow after completing her PhD at the Queen Mary University of London in 2017. Her thesis was explicitly on South African transnational literature written in and about London.

Thorpe is now a postdoctoral fellow at the University of Johannesburg. Bosman is now an English teacher at St Andrew’s College.

Amazwi houses the world’s most comprehensive collection of resources relating to South African literature in English. The museum will soon expand to include literature of the indigenous languages of South Africa.

This book presents a long-ranging and in-depth study of South African writing set in London during apartheid and beyond. Since London served as an important site of South African exile and emigration, particularly during the second half of the twentieth century, the city shaped the history of South African letters in meaningful and material ways.

Thorpe based the book on her PhD research entitled “Cosmos in London: South Africans Writing London after 1948” but has further developed her approach resulting in some notable differences. One aspect that Thorpe developed from the thesis stage of this research was to think about gender in the city, so the book includes studies of South African women writers Noni Jabavu and Lauretta Ngcobo.

“South African women had a different approach to London in their writing, not least because black women writers, in particular, were historically side-lined and not provided as many publishing opportunities. There was already an established tradition of masculine urban writing in South Africa (like Drum Magazine) that some writers then repurposed in their London writing.”

Looking at these writers allowed Thorpe to explore further the gendered dynamics of South African and London writing, and thinking about Lauretta Ngcobo’s activism uncovered influential networks between South African writers and black British activists and writers during apartheid, particularly in the 1970s and 80s.

The book will appeal to many audiences, including non-academic audiences and other humanities fields outside literary studies, as Thorpe has taken an eclectic and interdisciplinary approach in the subject matter, drawing on history, philosophy, media studies, and music history, to name a few.

Hopefully, the multi-disciplinary nature of the book will make for a fascinating story about some lesser-known aspects of South African writing and South African and British history – and indeed shed some light on some under-researched writers as well.

“I think that this work is valuable in our present and for our future. Considering the concerning move towards inward-looking nationalisms in many parts of the world, it’s a crucial reminder that so-called ‘national’ cultures have always been globally networked – spaces intersect with one another both through cultural products and through the physical presence of diasporic people,” Thorpe said.

Order this book at www.manchesteruniversitypress.co.uk

Rejection of Victimhood in Literature by Sean James Bosman

Bosman’s book was also developed from his PhD thesis entitled “Between Nationalism and Transnationalism: Ostracism from the Diaspora Space in selected African, South Asian, and Latin American Literature”.

Transnational writers are increasingly opposed to representations of refugees, exiles, migrants, and their descendants as emblematic victims. With the rise of populist nationalisms in the USA and the UK in the era of Trumpism, Brexit, and their aftermath, targets of nationalist groups have increasingly been represented, and thus constituted, as individuals suffering as victims.

Certain groups embrace such representations. They use them to secure help and protection for themselves. Less scrupulous individuals may even embrace these representations to elide their accountability and further nefarious goals.

Rejection of Victimhood in Literature examines an intriguing selection of writers (Abdulrazak Gurnah, Viet Thanh Nguyen, and Luis Alberto Urrea) to show how they attempt to recalibrate such stories to reject victimhood. It explores how just memory (also called ethical memory) is deployed to ascribe agency to transnational characters.

The primary audience of the book is lovers and students of literature. The book is academic at heart and draws on internationally accepted theories to formulate its critical lens. It presents a series of close readings and comparative literary analyses that primarily appeal to literary scholars and students.