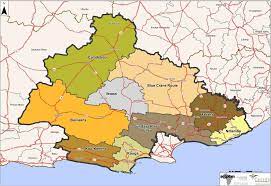 This was the first meeting of the Council since the shock passing of the late Executive Mayor, Cllr Mzimkhulu Njadayi in November last year.

During his acceptance speech, De Vos reiterated the late Executive Mayor’s priorities and pledged to continue with the same plans, which were aimed at improving the lives of the district’s communities.

Some of the priorities outlined by the Executive Mayor included a more intense focus from the district in supporting local municipalities and an urgency in moving the SBDM offices to Addo.

De Vos, a seasoned politician, hails from Willowmore and was previously the Speaker of Council at SBDM and the Mayor of Dr Beyers Naude Municipality. He is also currently the Acting President of the South African Local Government Association (SALGA).

During the meeting, Cllr Katie Hendricks was sworn in as the new representative to the SBDM Council from Dr Beyers Naude Municipality, replacing the vacancy left by Executive Mayor De Vos, who served as representation from the local municipality.

The Executive Mayor announced that he would be leading the Special Programmes portfolio himself. Therefore, only four Mayoral Committee Members were announced as follows: