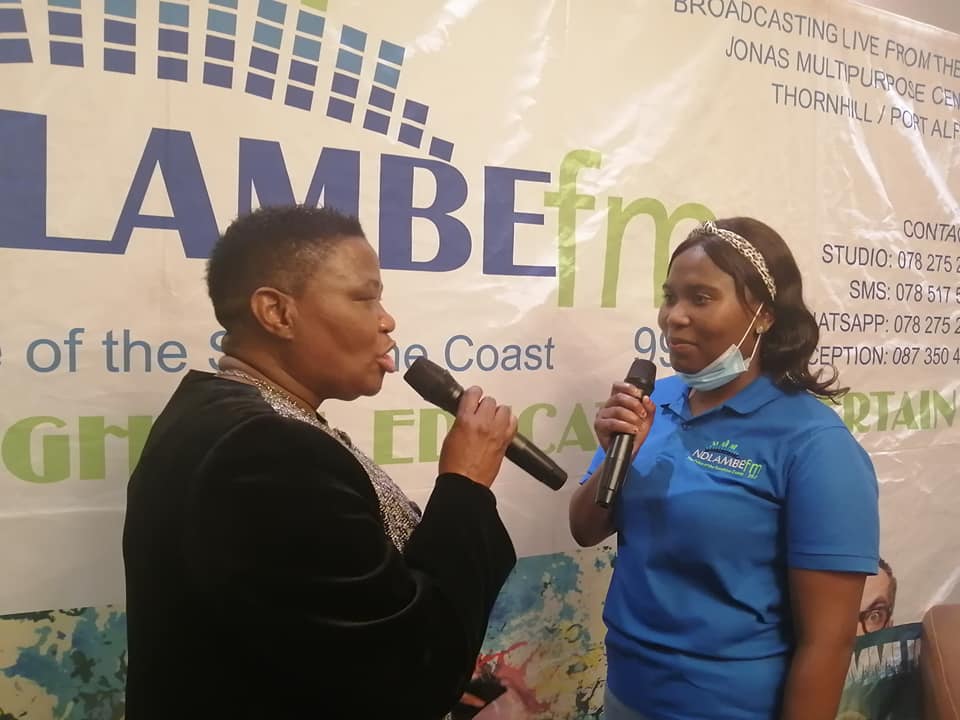 Newly-elected Speaker of the Sarah Baartman District Council (SBDM), Nomhle Gaga, speaks during an interview with Ndlambe FM after the ANC's victory in the SBDM council elections on Thursday 25 November. Gaga, a former Makhanda mayor, was ousted from her mayorship at the end of 2018, but is set to resign from the SBDM and return to Makana as mayor soon. Photo: Ndlambe FM

The African National Congress (ANC) held onto its control of the Sarah Baartman District Municipality (SBDM) during the inaugural ceremony on Thursday, 25 November, despite controlling just 14 of 30 seats on the council.

The ANC needed the help of either the DA (12 seats), the EFF (three seats) or FF+ (one seat). A total of 16 councillors voted in former Makhanda mayor Nomhle Gaga as Speaker and Mzimkhulu ‘Scara’ Njadayi as Executive Mayor of the SBFM.

The inauguration of the council was overshadowed this week by the shocking news that Njadayi had died after chairing an SBDC meeting in Gqebera on Wednesday, 1 December.

According to a report in the EP Herald on Friday, 26 November, Njadayi said he had talks with DA councillors on the sidelines to clinch his win. Njadayi had alleged that some DA councillors were unhappy with Smith’s candidacy for the mayoralty.

EFF leader Julius Malema made it clear that the party would not support any mayoral candidates put forward by the ANC. Grocott’s is awaiting comment from EFF provincial leader Yazini Tetyana on the matter.

“Regarding my candidacy, I had the full support of my caucus and the Federal Executive. Again, this is a false narrative created by the ANC to shift the focus away from the two EFF councillors to protect them.”

“We have laid a foundation for a new government in time to come. Over the coming months, we will work hard to build a strong, united and effective voting block to hold the ANC accountable,” Smith added.

Meanwhile, despite being elected speaker of the SBDM, Nomhle Gaga is the ANC NEC’s choice to be Makana Mayor, according to an official ANC press statement released on Monday 22 November. Reliable sources say Gaga is likely to resign as SBDM speaker soon.

Previous ArticleWhen research is for the people back home
Next Article Omicron is the new COVID kid on the block: five steps to avoid, ten to take immediately