When research is for the people back home 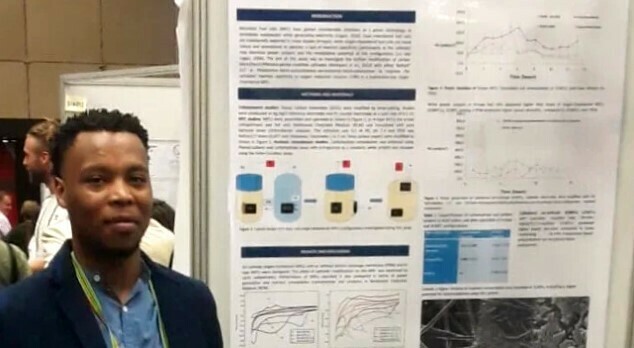 Siphumze Bani has been awarded a distinction for his Masters in Biotechnology for an impressive thesis project on water desalination through the Rhodes University Biotechnology Innovation Centre (RUBIC).

Desalination is the removal of dissolved salts from seawater and, in some cases, from the brackish waters of inland seas, highly mineralised groundwaters and municipal wastewaters.

Bani comes from Willowvale, a small town in the Eastern Cape, which he fondly describes as being “surrounded by trees and hills”. Sadly though, Bani explained, “Whenever I came home for the holidays, the water tanks were dry, and people had to go collect water from rivers such as the Qhora River. That’s what drives me and my project – the water issues facing my hometown and the water situation happening in Makhanda.”

When comparing his hometown to Makhanda, he explains that he understands Makhanda’s water crisis more than his hometown. “If you go to the location in Makhanda, you will see that the residents need help with domestic water management – particularly how to reuse water. But in Willowvale, bulk water construction is needed, such as drilling boreholes for difficult seasons like winter. Furthermore, the water from the boreholes would have to be tested to ensure it is safe for human consumption. It’s very complicated,” he said.

Bani started his journey at Rhodes University in 2013 and majored in Microbiology and Biochemistry in 2016. He received a Postgraduate Certificate in Education (Life Sciences) before conquering his first-class Master’s.

Currently, his project is open, Bani said. The journey is still long, as many theories still need to be proven. “We have to upscale what we have been doing at ‘pilot-scale’ before we can take it to the public. This would mean involving many more participants in what we are doing.” Bani hopes he can one day go door to door and collect samples for the continuity of his project.

“The next step is to collect water from about 50 houses from the location in Makhanda and to observe the composition of that water and question residents about their water consumption in everyday activities, especially the quantity,” he said.

Nokhaya Bani, Siphumze’s mother, further confirmed the dire water situation in Willowvale and firmly believes her son may have some answers to help their community. “I’m 64 years old now, and I think that if he can complete this work, everything will be better here at home. I have back problems and cannot carry water by myself, let alone take myself to the clinic,” she said.

Bani could not stop talking about the support he received from research groups and researchers at Rhodes University. He expressed his utmost gratitude to Associate Professor in the Faculty of Pharmacy, Professor Roman Tandlich and SARChI Chair in Biotechnology Innovation & Engagement at RUBIC, Prof Janice Limson, who served as his supervisor and co-supervisor, respectively and RUBIC’s Dr Ronen Fogel, who guided his research in microbial fuel cell technology during his BSc Honours degree.

Prof Limson concurred, stating that Bani “was not only able to draw on his personal experience as an inspiration, but engaged communities as part of his research, ensuring that the work ultimately was aimed at addressing real societal challenges”.