Some glitches, but Makana voting off to a brisk start 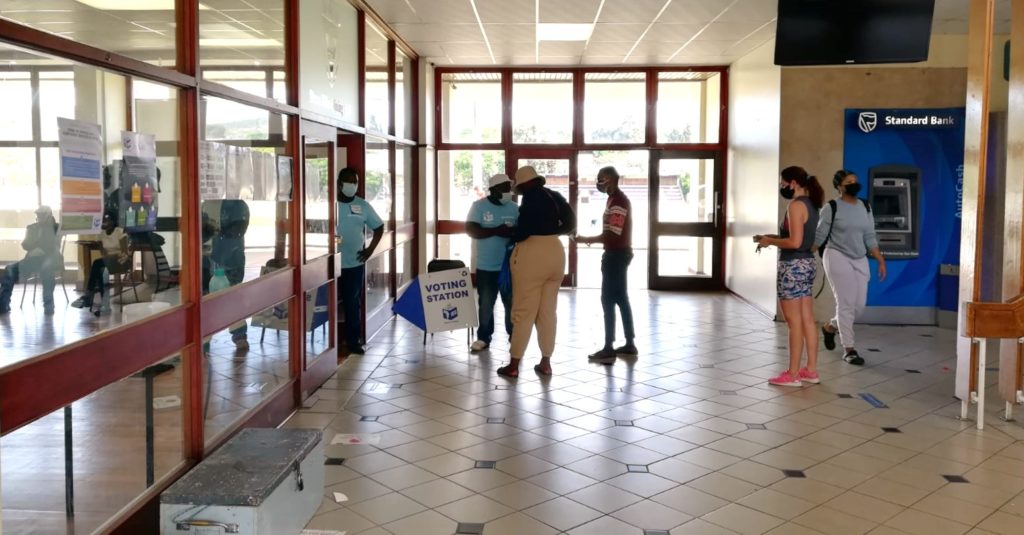 Voting has been brisk and relatively smooth at Makana voting stations.

Voting was initially a little slow at the Library due to a technical glitch with the scanner, and some voters were disappointed to discover they had not been registered in Ward 8.

However, Makana Citizens Front (MCF) party agent Snow Harris said once that glitch was sorted out, “things were moving well. The procedure has been flawless. The check and balances are good.”

Voting has been smooth, and Magabuko reported that all the party agents were getting on well with each other.

“There is no beef between the parties. The main purpose is service and to make sure our people receive what’s due to them,” he said.

Young voters Siqamo Jamo and Manzakwazi Nxumalo said they were voting to exercise their constitutional right to vote at the Ward 12 voting station at Rhodes University’s Stephen Bantu Biko building this morning.

Both were impressed with the speedy voting process. “It was very quick and straightforward. I expected it to be much longer, but it was very efficient,” Jamo said

Another young voter, who wished to remain anonymous, said it was important to vote to address community concerns.

“I’m voting because if we want change in our country and area, then we need to make sure that we contribute to making a difference and change the things that we complain about,” she said.

Meanwhile, the Independent Elections Commission (IEC) reports that voting in the 2021 Municipal Elections got off to a smooth and timely start at almost all 23 148 voting stations early today.

The IEC was encouraged that many voting stations reported strong turnouts early, with many voters already waiting to vote before the 7 am opening.

Delays in voting were reported in less than one per cent of voting stations due to various circumstances,, including tents being blown over by high winds overnight and the late arrival of election staff and voting materials in a few voting stations.

The Commission reports that a presiding officer in the eThekwini Metro was arrested after allegedly stuffing marked ballots into a ballot box. The matter is now in the hands of the South African Police. The IEC said the incident had not affected voting.

Voting will continue throughout the day until 9 pm tonight when voting stations close. Voters who are at the voting station or in a queue at 9 pm will be allowed to vote.

Voters are reminded that they must vote only where they are registered. They can check their voting station details by dialling *120*432# or SMS their ID to 32810. The Contact Centre on 0800 11 8000 is also open until 9 pm tonight to assist voters.

Voters must have their ID documents and are reminded that each ballot paper must be stamped on the reverse.

Voters were also reminded that taking a photograph or selfie of their marked ballot paper was prohibited. This is essential to protect the secrecy and integrity of their vote.

The Electoral Commission also reminded all employers – especially those in the agriculture, retail, transport, mining and other sectors – that today has been declared a public holiday to allow all South Africans the opportunity to vote.