‘Makana is a health and environmental disaster’ – DA 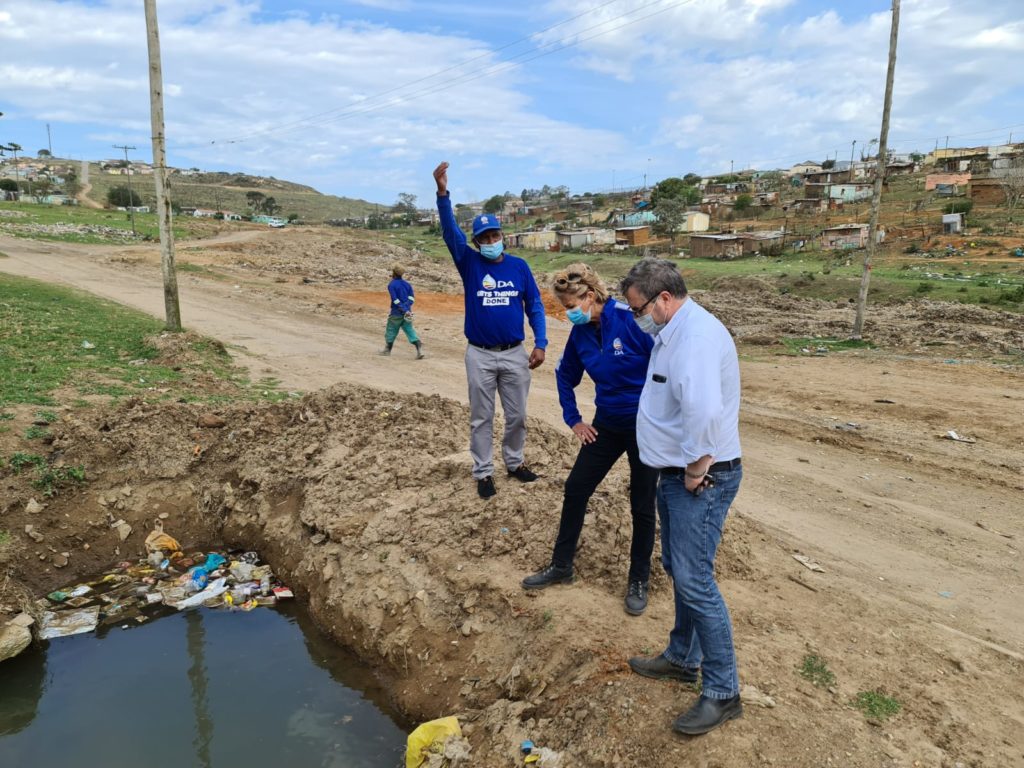 The Democratic Alliance’s (DA) Shadow MEC for Health and Environmental Affairs Jane Cowley has described Makana’s raw sewage and illegal dumping problems as a “health and environmental disaster, which was making people ill”.

She spoke to an enthusiastic group of residents near Mary Waters High School in Ward 3 after an oversight visit by DA leaders to Makana on Thursday, 14 October. Ward 3 encompasses Vergenoeg, Xolani location, Ghost Town and Sun City.

DA Shadow MEC for COGTA Vicky Knoetze MPL reported that just across from where the community was meeting, in Zolani, she had observed raw sewage flowing like a river in an area where children played, and livestock grazed. She acknowledged the tragic drowning of a young man in a municipal construction site two weeks ago.

“Although the construction site had been filled in, less than 50 metres away, another deep hole full of water had been left open, just waiting for the next victim. This is indicative of ‘a broken municipality in a broken province’ where ANC politicians are more concerned with their stomachs than the needs of residents,” Knoetze said.

DA Constituency leader for Makana Kevin Mileham MP laid out the DA’s offer to Makana, starting with a clean and accountable government that worked in the people’s best interests. He highlighted the need for essential services, especially the maintenance and upgrading of water, sewage, electricity and roads infrastructure.

Mileham pointed out the need for an active and involved citizenry in making Makana a better place.

The DA’s Ward 3 candidate, Godfrey Brockman, spoke to the specific concerns of the residents of Ward 3.

“The community cannot continue to suffer at the hands of an incompetent and corrupt government like the ANC,” said Mileham.

Brockman pointed out the DA’s track record in government and said that “the DA gets things done”. He called on the residents of Ward 3 to bring about real change by voting for the DA on 1 November.

“This comes as a result of a growing number of dumping sites around Makhanda, particularly in the townships. The aim is to reach out to everyone in our community and send a clear message regarding the dangers of illegal dumping and littering.

“The municipality has had to go back numerous times to clean areas that had been recently cleaned because members of the community continue to dump on the cleaned areas,” Mjekula said.