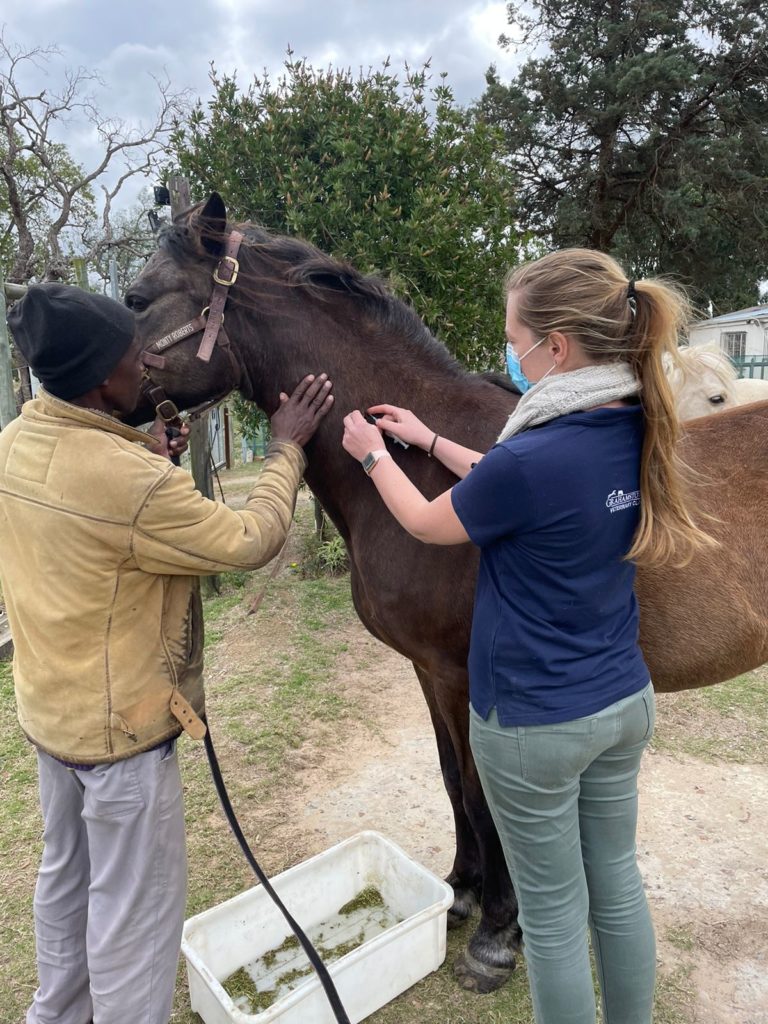 Dr Annie Mears of the Grahamstown Veterinary Clinic vaccinates a horse on a farm near Bathurst on Thursday 16 September 2021. The GVC and Makana Veterinary Clinic are joining forces with the State Vet to vaccinate animals in and around Makhanda against rabies. Photo supplied

Makhanda vets in private practice are joining forces with the State Veterinarian in a campaign to vaccinate the town’s dogs against rabies. This comes as outbreaks are reported in Nelson Mandela Bay and Buffalo City Metro municipalities. According to local vets, no rabies cases have been reported among domestic animals in Makhanda for several years; however, three cases in surrounding areas were reported in 2020 – two wildlife and one domestic.

“In Makhanda itself this year, there have been no positive rabies cases,” said Grahamstown State Veterinarian Sivuyile Tabankulu. The last positive case in a domestic animal was reported on a communal farm 30km from Makhanda on the Bedford Road, Tabankulu said.

“That was a dog, and we immediately mobilised with a vaccination campaign at the time.”

Any case of rabies must by law be reported to the State Veterinarian of the area.

Positive cases in those two metros are rising and Makhanda, midway between, is at risk stresses the Makana Veterinary Clinic’s Dr Amy Jackson-Moss.

“This is because there’s no limitation on the movement of animals from those areas,” she said. “A person might collect a dog from there that is in the early stages without realising it’s infected.”

With all available State Vet resources, including vaccines, urgently deployed to Gqeberha and East London, Makhanda’s private veterinarians are stepping in to support a massive community vaccination campaign.

“That’s the percentage we’re aiming to reach in targeted areas within the community to control outbreaks,” said Jackson-Moss.

“We’ll be using loudhailers to alert dog owners when we are going to be in their area,” said Tabankulu.
The campaign starts in earnest next week, Tabankulu said.

“Together, we will cover the whole of Makhanda,” said GVC’s Annie Mears. “Please be patient – we will get to you!”

Mears has been doing vaccinations in the Bathurst and Bloukrans Pass areas this week, with vaccines supplied to the practice by the South African Veterinary Association.

Wildlife veterinarian William Fowlds said the most recent cases of rabies identified in wildlife were last year, on land 5km and 20km from Makhanda, respectively. Both were bat-eared foxes.

“Both were on public roads,” Fowlds told the Dispatch. “In both cases, the members of the public thought they had been hit by a car because they were behaving strangely.

“They stopped to help, thinking the animals were injured, but luckily thought twice and called a vet instead. Both animals tested positive for rabies.”

Fowlds emphasised that wild animals are the main reservoir for rabies.

“Foxes are the most common carriers, but cats – caracals or African wildcats can also carry rabies. You do get rabies in buck, but you’re more at risk from animals that bite.

“A kudu with rabies is not as much of a risk to you as a mongoose or a jackal.”

Fowlds cautioned to watch out for unusual behaviour in wild animals. “Any wild animal that behaves as if it’s tame, or that has neurological symptoms – staggering, or looking as if it’s in pain – you should avoid it and rather call a vet.”

Bring your dog
Rabies vaccination campaigns are carried out annually, and in 2020, this had to be done street by street because of the limitations in numbers imposed by Level 3 and 4 lockdown restrictions. Tabankulu expects this campaign to be somewhat easier, although there are still restrictions on crowds, and it’s essential to control social distancing and mask-wearing.

Tabankulu appealed for community members to bring their animals when the vaccination campaign comes to their area.

“What we want to know is that rabies affects people as well as dogs,” said Tabankulu. “It’s not treatable, and it is fatal.

“Vaccinating your animal is free [from the State Veterinarian]. The best way to keep you and your family safe is to get your animal vaccinated.”

Here is some important information about rabies from Dr Annie Mears of the Grahamstown Veterinary Clinic:

WHO IS AT RISK?
– all animals can get rabies
– rabies is always fatal
– herbivores are more susceptible but less risk to humans generally
– dogs are the biggest rabies risk in communities because they bite humans. Children are most likely to get rabies due to contact with stray dogs.

HOW CAN YOU PROTECT YOUR DOG?
– Have your dog vaccinated when rabies vaccinations come to your area or take your dog to your private vet
– Keep the proof of vaccination because the state can euthanase any animal they suspect of rabies by law. If your dog has been vaccinated, it can be quarantined instead of euthanased.
WHAT SHOULD YOU DO IF YOU’VE BEEN BITTEN BY AN ANIMAL YOU SUSPECT MAY HAVE RABIES?
Wash the wound well with soap and water for 10 minutes, then see a doctor within 24 hours.
CAN PEOPLE BE VACCINATED AGAINST RABIES?
High-risk animal workers (veterinarians, game rangers) should be vaccinated but not the general population.
WHAT SHOULD YOU DO IF YOU OWN OR SEE AN ANIMAL YOU SUSPECT HAS RABIES?
• The State Veterinarian must be informed. Call 046 622 7112 or 046 622 5870 directly during weekday working hours.
• If you can’t reach the State Vet directly, you can contact a private vet, who will examine the animal and inform the State Vet of their findings.