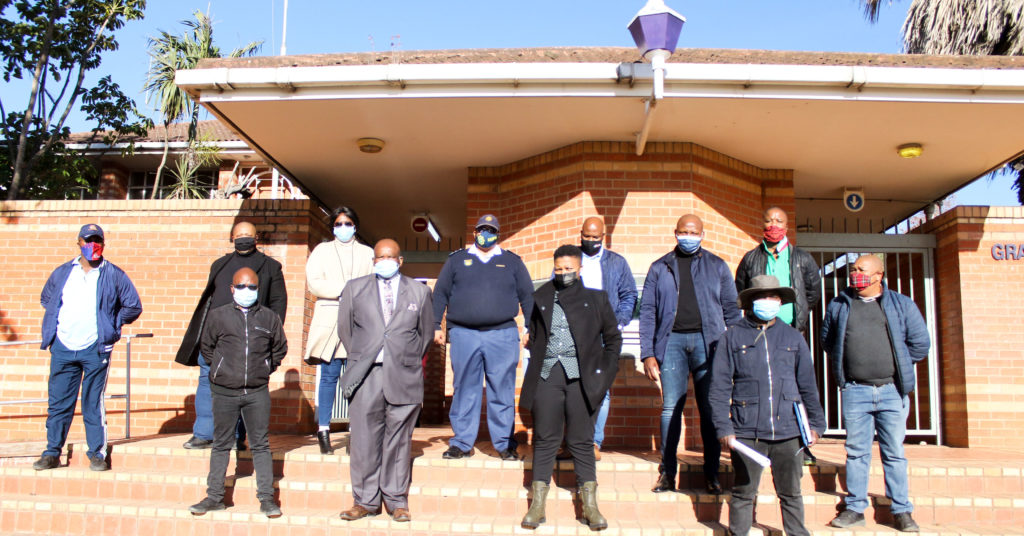 The launch of a multimiliion-Rand upgrade to the Grahamstown Police Station on 30 June 2021. Photo: Sue Maclennan

Makana Local Municipality joined the local SAPS leadership in celebrating the start of the multi-million rand renovation of the older of Makhanda’s two police stations recently.

Speaking at the event on Wednesday, 30 June, Station Commander Colonel Mbulelo Pika welcomed various stakeholders to the “auspicious occasion as we celebrate the renovation of a police building which has served our communities faithfully for the past of the 30 years”.

The renovation of the Grahamstown Police Station has been in the pipeline for a number of years. However, the renovations were delayed by internal processes of the Department of Public Works, which is the custodian of all government departments’ buildings.

Director of Construction and Project Management at the Department of Public Works Mr Siyabonga Jikeka said they had planned to undertake renovations on the building several years back but due to processes within the department it took longer. “We went on tender I think two years back but couldn’t find a compliant contractor. We then had to go out on retender and we were successful.”

The contract duration is 24 months but the department hopes that the contractor will finish before the deadline. This is because of the fact that the building will continue to serve the public while the renovations carry on.

Departmental Project Manager, Ms Zinzi Ntanjana said some of the work would include a complete revamp of the water and sewer reticulation system. Like changing the existing pipes from asbestos and steel to PVC and increase the size of the pipes. “We are aware of water challenges in Makhanda so we will install storage tanks.”

The makeover will also include the following:

This will ensure that the members feel safe and secure within the daily working environment.

The contract amount for the project is R52.7million. Ms Ntanjana said the 30 percent subcontracting was complied with in the project, which means the contractor must make sure that local SMMEs and local labourers benefit.

“Also we have a programme from the EPWP National Youth Services which will include about 40 young people who will be involved in the project. They will learn all the skills both from the classroom and on site.”

Giving a brief history about the Grahamstown Police Station Colonel Phika said prior to the existence of the current building, the SAPS was based in a small house in New Street, which has now become the parking area of the Magistrates Court.

The station was built in 1990 and was occupied by the SAPS in 1992. Its first Station Commander was Captain Jonker.

Colonel Phika said it has been a privilege to be the Station Commander at the station since 2019. Since 1992 the building has never been renovated nor upgraded. Colonel Phika said the new design brought about excitement for SAPS Grahamstown.

“Members will now have a new space appropriate to the services and also to service the community.”

Handing over the keys to the contractor, Colonel Phika said, “It gives me great pleasure to hand over the keys and access to the station for this renovation to the contractor. We wish the Project Manager and his team all the best during this difficult time of Covid-19 which comes with many restrictions. My open door policy extends to all of you in this police station at all times.”

Representing Makana Municipality at the event Engineering and Infrastructure Portfolio Chairperson Councillor Ramie Xonxa said the municipality would like express its gratitude to the government for investment in the Makana municipal area.

“A project that is worth R52million to us really it is something that ensures that a number of people in our jurisdiction will at least be able to get jobs, money to pay rates and acquire skills from this project. This makes us happy.”

Councillor Xonxa said the municipality has been quite fortunate to be on the receiving end of much-needed funding to provide better services to the community. He listed a number of projects that are currently under way in Makhanda.

“I want to say to the police station and Colonel Phika in particular we are happy that with the renovations that are going to take place here this police station is user friendly and easy to access to people from all walks of life,” Councillor Xonxa added.

District Manager for the Sarah Baartman District, in the Department of Safety and Liaison Mr Mncedisi Boma said they were proud of the project and appealed to the community to take ownership of it. “It is very important that the work environment becomes conducive to fighting crime. This project is also going to have spin-offs for communities, and this makes us happy as a department.”

Project manager from Molanco Trading Enterprise Khodani Demana, which is the contractor responsible for renovations said they hope that they will be able to work with the community and have a good relationship with the police department. “We believe that at the end everybody will be happy with the project.”