Behind the lines: writing the hidden histories of SA rugby 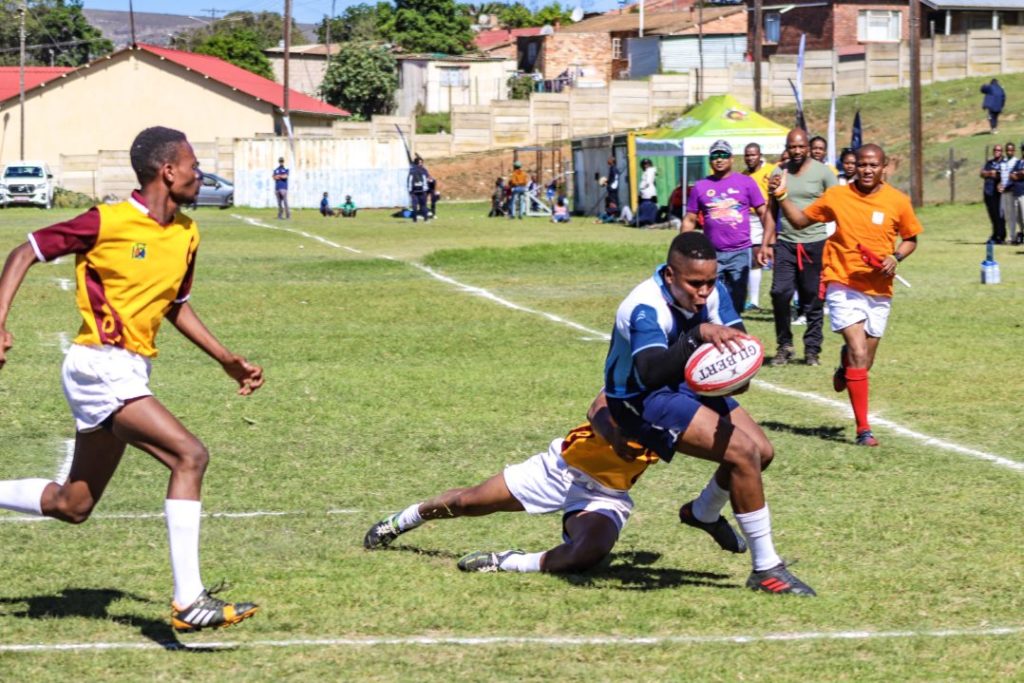 A Winter Rose winger scores at the Oval. The club's history is included in a new book about Black rugby. Photo (April 2019): Stephen Kisbey-Green

2006. ASHWELL Adriaan, a friend through the ages, suggested we write a book on black rugby in Makhanda. I was keen but kept wondering how we would go about writing this story. And then Ashwell showed me a scattering of five or six photographs. They just blew my mind.

For there before my eyes was a history that stretched into the late 19th century. As photographs met memories, the barest outlines of past generations came to life. To think I had walked the streets of Joza and Ghost Town in the 1980s and never knew this history. It is no wonder that Barthes tells us “photography has something to do with resurrection”.

2010. I was back at Rhodes University. How do you build an archive when your subjects are not even a footnote? Like a loose forward, you must live off the scraps. A photograph. A badge. A battered trophy. To write a history of this kind is to play in the rain with a sodden field and snotty ball. It’s about grinding out small territorial gains, ready though to run back and start again if the ball is lost. The points on offer are modest. A try still only counts three.

It may be an image taken by a travelling Agfa box camera; the snapshot preserved through the years. Or a lead on who captained Lily White in 1969. This writing of history is about grinding out a result in adverse conditions. As this book took shape, our ways of thinking and seeing sharpened. As a narrative formed, we had a sense of a living, pulsating history. The desire to write and obligation melded.

Many of those who played the game worked in the whites-only private schools of Grahamstown. Others fed off the crumbs their mothers scrounged from the kitchens. And so a link was created with the rugby of these schools, as much as township rugby was differently played; open and flowing, breaking racial boundaries, defying the system, dreaming of a different world.

Remember how Prime Minster Hendrik Verwoerd scorned proposals for equality in education. This because it created “expectations in the minds of the Bantu which clash with the possibilities in this country”. But education was not limited to the classroom of imposition. Teachers got pupils to read newspapers and provoke discussion. The stony fields of play also had lessons to teach. It was here that novel solidarities were born and reputations earned.

On fields of ruin rugby infused its players with a sense of order, structure and dignity alongside intuition and creativity. This, in a world where its players were buffeted by the chaotic vindictiveness of apartheid, treated as unworthy beings in the land of their birth.

This story forces upon the sporting archive, another story. Still there is a challenge. How to stitch a narrative together.

Siya Kolisi comes to Makhanda bearing the Webb Ellis Cup. And then one suddenly realises that one of the founders of Eastern, a legendary Makhanda club established in the first decade of the 19th century, was a Kolisi; a Kolisi converted an Eastern Province try against Transvaal in 1937 and Vuyani Kolisi was an outstanding No 6 for Eastern in the 70s and 80s, captaining the provincial team .

Siya was not the first but comes from a line stretching back more than a century, deep in Makhanda’s rugby history.

But what these clues do is to provide the material to thread fragments into a narrative of a history that so far remains largely invisible in the public domain. This is a story about a place that was meant to be a landscape of exclusion, of the defeated, which was turned into fields of deep attachments and belonging, where racial boundaries were confronted, and new nonracial bonds created.

And, as much as the story looks at weighty issues of race and class, and the possibilities and pitfalls of the transition to democracy, it is above all about how beautifully the game was played on those stony fields that Makana and Stuurman once walked. We hope in reading this book there is a realisation that for every Danie Gerber there is a Dennis Stuurman, for every Paul Bayvel, a George Lamani, for every Frik du Preez, a Phumzile Adam. And for every Thando Manana like Siya Kolisi there is one, deep in history. As the pages of this book reveal Fana (Bush) Manana was one of the stalwarts of Makhanda’s Winter Rose in the 1890s, taking the game to East London, the Highveld and Cape Town. His son Cebo (China) Manana played for Eastern Province.

Black rugby players were scorned by the white establishment under apartheid. Pegged back on their own 5 metre line, with every attack thrown at them, and a one-eyed referee too, black rugby held firm while stretching and confronting what apartheid imposed. Every charge was met with smother-tackle. Every chip kick gathered in. And down in the Swiss Finishing School of the ruck, every elbow met a knuckle or two.

Black rugby in South Africa could not win. Its job, through the long decades, was simply not to concede. Not to drop its head. That job it did against epic odds. The players of that generation have bequeathed to rugby as a whole a heritage and a class; we can now all celebrate, playing on fairer fields.