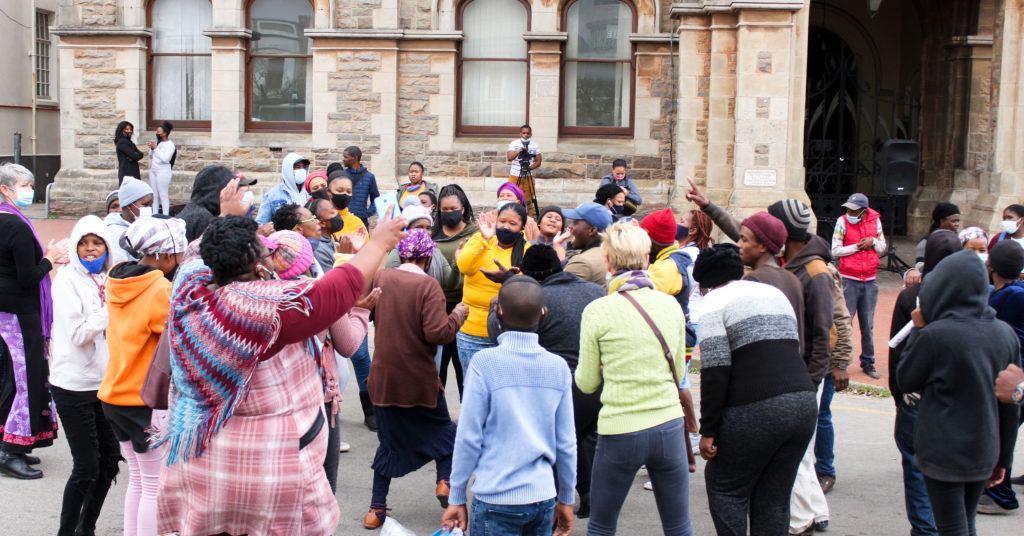 Protesters gathered outside the City Hall on Tuesday 15 June were frustrated when they heard MEC Xolile Nqatha would not be addressing them and listening to their grievances directly. Photo: Sue Maclennan

A letter to Premier Oscar Mabuyane warning that the town may be about to cross a “precipice of chaos” and pleading for his personal intervention has received no response from the Premier’s office, a week after it was sent. The plea from the Makhanda Circle of Unity – a solutions focused civil society forum  – is their second bid for Mabuyane to step in to resolve the crisis.

The MCU appealed to the Premier after a group of protesters in taxis intimidated residents and attempts were made to set fire to two municipal buildings during the first citywide shutdown a month ago.  In that letter, signed by co-chairs Owen Skae and Vicentia Kgabe, the MCU says there is an urgent need for the provincial government to provide leadership. If the Premier were to come, the MCU says, it would be symbolically important for citizens “who have long been struggling to have their basic conditions of living met”.

The follow-up letter, dated 18  June, refers to the shutdown on 17 and 18 June, following a community meeting.

Explaining the chain of events, the MCU referred to the initial and reportback visits to Makhanda by three MECs on 26 May and 15 June that was the Province’s response to the community’s unhappiness.

“On the 15th of June, the Bhisho delegation returned for a report back from the Municipality on their progress in relation to responding to the service delivery challenges, and to further engage them on a long-term strategy moving forward,” wrote the MCU. “Simultaneously, a peaceful protest was organized in Makhanda on the same day outside of the Makhanda City Hall, where gathered protesters were anticipating an address from the Bhisho delegation. However, this did not happen, which further exacerbated frustrations from gathered citizens…

“What has become explicitly clear, Premier Mabuyane, is that the situation in Makhanda and Makana Municipality will continue to devolve until protesting citizens feel substantially engaged and heard by you directly.”

The MCU says the Bhisho delegation’s refusal to speak directly to protesting citizens and insistence on only engaging with smaller groups triggered more anger “because it is reminiscent of how citizens have felt that the Municipality has governed them over the past few years – from a distance, and behind closed doors.”

“The moment we are in does not need due process, or protocol to be observed as a priority over the dignity of people,” the letter continues. “The moment we are in requires firm,  responsive leadership that is willing and able to transparently engage with constituencies to not only calm tensions, but to facilitate co-creation of strategies going forward. This moment requires the highest of provincial offices to prioritise it before it is too late.”

In a strong indication of the seriousness of the situation, the writers say, “As it stands, Makhanda may very well be about to cross the precipice of chaos it has been on for some time – your personal intervention is crucial to its revival, Premier Mabuyane.”

In addition to the Premier, the letter has also been sent to Mbulelo Sogoni. Director-General: Eastern Cape;  Khumbudzo Ntshavheni, Minister in the Presidency; Dr Nkosazana Dlamini-Zuma, Minister: Cooperative Governance and Traditional Affairs and copied to COGTA MEC Xolile Nqatha, as well as the Chiefs of Staff and personal assistants of those addressed.

As of Thursday night, Programme Manager for the MCU Sakhe Ntlabezo said no response had been received.

Speaking to GMDirect on Friday 25 June, acting spokesperson for Premier Oscar Mabuyane, Mxolisi Spondo, said he was not aware of the letter.

“I am not aware that he has received it yet,” Spondo said.