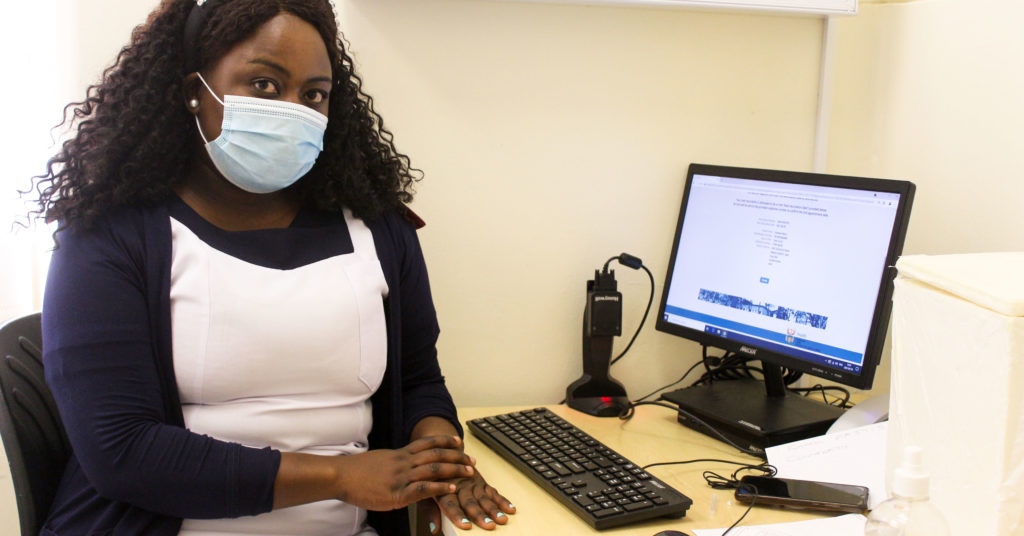 Phase 2 under way despite hitches

“As long as we have vaccine, we will attend to you,” says Settlers Hospital CEO Yvonne Ngesi, responding to questions about the vaccination rollout in Makhanda. So far, 1540 people have been vaccinated in Makhanda. This excludes health care workers vaccinated out of town under the Sisonke research poroject.

This week has seen mixed reports from Makhanda residents about getting vaccinated at Settlers Hospital. While many have reported a smooth, hassle-free process in receiving their first dose of the Pfizer vaccine, others have arrived, only to find that there is no stock.

Phase 2 of the national vaccination rollout, targeting people 60 and over and non-frontline health workers, was launched at Settlers Hospital on 17 May. Residents of retirement homes were among the first targeted, with Department of Health teams setting up vaccination stations at those sites.

Port Alfred resident Mary Fike was among a number of over-60s who expressed frustration with what seemed like poor communication.

“When they made a call for over 60s to register, I did so almost immediately,” Fike said. “I got confirmation from both my medical aid and the Department of Health that I was registered. With the vaccine not yet available in Port Alfred, Fike travelled to Makhanda on Tuesday to get vaccinated.

“I went to Clicks but was told the vaccine had not yet arrived.”

Fike went to Settlers Hospital, where staff discovered that while she was registered for vaccination on her medical aid’s database, she wasn’t registered with the Department of Health. So they registered her; however, the hospital too was out of stock and they asked her to return.

Hearing that the vaccine will be available in Port Alfred next week,  Fike called her medical aid for certainty about where and when she could receive it. “They said, ‘We don’t know,’” Fike said.

A 72-year-old Makhanda resident had a very different experience this week. He share it on a neighbourhood WhatsApp group (and we’re sharing it here with his permission).

“[My wife] and I got our first vaccination [Wednesday 2 June] without being summonsed by SMS,” he said. “Started early at Clicks but told no vaccine – in reality they’re no longer accepting walk ins. Headed to Settlers about 11h00, where there was a short queue, all comfortably seated. Some preliminary form filling and checking – temperature, blood pressure etc, more waiting while those actually summonsed by SMS, the disabled and really old get to jump the queue before a final online check and card filled in with your details and date of next vaccination before actually getting the jab.

“Received an SMS confirming the vaccination before you get to the car. All in all an intricate but straightforward process, well organised. Out by about 12h30. and looks like they weren’t running out of vaccine.”

Speaking to GMDirect later, he said, “There was no shortage of vaccine when we went. We didn’t receive an SMS telling us to come. That wasn’t a problem – but when you get there they check you’re registered. If you are, there’s a prefilled form ready for you. If you aren’t, it takes longer – because they must register you and then you join the queue again.”

There was a medical technician managing the vaccine.

“We felt we were in professional hands,” the resident said. “Everything went very smoothly.”

Robert Kraft (who gave us permission to share this here) said on his neighbourhood WhatsApp group, “At Settlers Hospital when  I arrived Monday a week ago the very competent and calm lady in green organising the queues told us up-front how many vaccines she had for the day.

“It was 70 vaccines that day. We each got a number. And any who arrived later were told to come the following day without having to wait in line. It was all very nicely done. The wait was 4 hours but that was ok. They had chairs and some had brought their own camp chairs.

“They have introduced 2 queues now and also allocate you a number. Those who received a booking sms and the others who were registered but had not yet got notice of a booking. The former get priority.”

Ian Knott-Craig managed to get to Settlers yesterday around 1.30pm, before they ran out of vaccine. “I was really blown away,” he told GMD.

Yesterday he posted on his Facebook page, “Okay, I eventually ‘sucked it up’ and went and had my Covid-19 vaccine today, Settlers Hospital in Grahamstown.

“Anxious, I was, but that is another story. However, I would like to sing the praises of the Settler Hospital staff, from security, to reception, to the nurses, and the pharmacist for their amazing service, and quick it was. Their friendliness and willingness to help, was simply amazing. Well done to you all. You are heroes. Thank you!”

GMDirect was referred to the Clicks Area Operations Manager for clarity about their processes and availability of the vaccine, but has been unsuccessful in trying to reach them by phone.

Settlers Hospital CEO Yvonne Ngesi said until this week, there had been a mismatch between the electronic vaccination data system (EVDS) and the capacity of vaccination sites.

“Before this week, people were getting SMSes telling them to come for vaccination, but the system wasn’t taking into account how many people it was scheduling for a particular site for a particular day.”

On Thursday this week, for example, they had only 78 vaccines for the day, and there were people who arrived to find the site had run out.

“We can’t tell people to wait when that happens, because we’re not always sure exactly when the new batch will arrive.”

“But these are not all for Settlers,” Ngesi emphasised.

This is because Settlers is not only a vaccination centre, but also a distribution centre.

“We will get 1170 doses in a tray, but these are for Port Alfred, Humansdorp and Kouga, as well as Settlers,” she said.

Also important to know is that one vial of vaccine doses six people. This means before taking a vial out of the freezer, there must be six people ready to be vaccinated.

“That doesn’t mean we won’t vaccinate you if you come on your own, or find yourself the only one at the site,” Ngesi said. “We don’t turn people away for that reason: we call the Subdistrict (Department of Health) office to identify and bring five more eligible people.

“As long as we have vaccine in stock, we will attend to you,” Ngesi said.

“There are limited doses available,” the Department’s Subdistrict head Mohamed Docrat confirmed. “Preference is given to those who are booked on the system [EVDS] for that day, at that site.”

However, there is an allowance for walk-ins – “up to 20% of the capacity for the day”.

As of Thursday 3 June 2021, 1540 people had been vaccinated in Makhanda; however, this figure excludes health care workers vaccinated outside Makhanda under the Sisonke research project, Docrat said.