Mary Waters to re-open on Monday 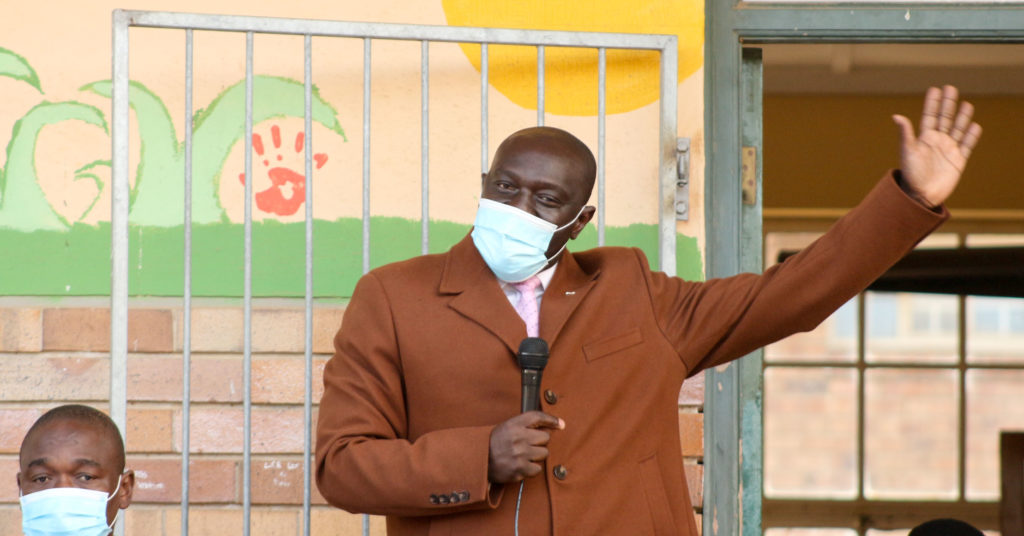 Mary Waters Secondary will re-open on Monday 7 June after parents’ three-week struggle for more teachers at the dual medium school. In a possible breakthrough for home-language teaching, MEC Fundile Gade this week said a long-term solution for the Makhanda school will provide a template for similar situations across the province.

Parents closed the school on Friday 14 May after their children in Grade 8 and Grade 9 received reports universally failing them in four subjects: Technology, Life Orientation, Creative Arts and Social Science.  In an accompanying letter, Principal Estelle Hendricks explained this was because the school had no teachers for those subjects, and so the children had not been formally assessed. Exacerbating the crisis was the termination of the Education Assistant programme last month.

Frustration followed as a series of education officials tried to resolve the crisis.

“The DD, CMC and EDO all speak a different language to one another,” said a source who has been involved in ensuring the crisis gets the attention it deserves. “And all of them contradict what the MEC has said.”

Godlo promised he would push for two teachers immediately, and negotiate for another two later. But on Friday 28 May, with no sign yet of the extra teachers, around 200 learners, parents and teachers marched to the local offices of the Department of Education to hand over a memorandum.

On Tuesday 2 June, Education MEC Fundile Gade led a full complement of education officials including Godlo, Betela and Matyolo. They met with the crisis committee and senior management team in the school’s quad. The meeting was chaired by ANC Regional Chairperson Scara Njadayi.

While Gade emphasised post provisioning policies (the rules and forumulae that determine the teacher: learner ratio), at the same time he highlighted the importance of home-language teaching to break the dominance of English in intellectual discourse. “We should prepare for an announcement in this regard in September,” he said.

He told the gathering that they had completed interviews for a Maths teacher and a Science teacher, but that neither was Afrikaans speaking.

“If the SGB and management agree, then next week we can bring two teachers – but they will teach in English,” he said.

Gade said the Department had made a concession for Mary Waters by providing two additional temporary teachers against the post provisioning norm (PPN) of 28 teachers.

But acknowledging the importance of the language children learn in, he said, “Our learners are not failing Mathematics; they are failing language.”

He said the Department would have to advertise for Afrikaans speaking maths teachers. “Even if we have to find them outside the District. If we don’t have them here, it is the State’s responsibility to find them,” Gade said.

“Let’s not leave this issue of Afrikaans pending,” Gade said. Let’s resolve it by Friday and use Mary Waters as an example of how to resolve it. Otherwise we will be burying these kids alive because of language.”

Gade said there were similar language-of-instruction crises in the Free State and the north-eastern Cape. “There the community wants their children to learn in seSotho.”

Gade said they would provide short term relief in the form of two teachers, while working out a long term structural approach.

But parents were adamant.  “My son’s report showed that he has failed  four subjects, not two,” said Reverend Lizo Dyibishe. Two teachers are not enough. No, we require four or six teachers for our children to come back and learn!

“You have spoken so much about this policy that is respected so much – but that policy was not made for us: it needs to be revisited.

GMDirect understands that a meeting of the school community on Tuesday afternoon followed extensive negotiation between parents’ representatives and the Department throughout the day.

“We are getting two [teachers]that can start on Monday,” a source said. “Parents accept two teachers but stand firm in saying that the Afrikaans speaking teachers are still needed.

“Two teachers [are]not enough to solve the current situation and a minimum of four is wanted by the parents.”

In addition, GMDirect understands that a retired teacher has offered to come and assist with catch-up lessons. “Hopefully this will motivate the other retirees to assist,” a parent said. It’s something that is a good thing that we have undermined for quite a long time and which must be looked into. Especially that we are currently undergoing a process of decolonisation of education in the country.

NOW LISTEN
GMDirect asked the MEC about the contradiction between the Department’s Language of Learning and Teaching policies, and its post provisioning policies.  We also asked him to expand on his suggestion that Mary Waters would be a template for solving similar language crises elsewhere in the Province. And he says the Department has undermined dual-medium schools for too long.

* This article was replaced with an edited version at 7.15pm on Friday 4 June.