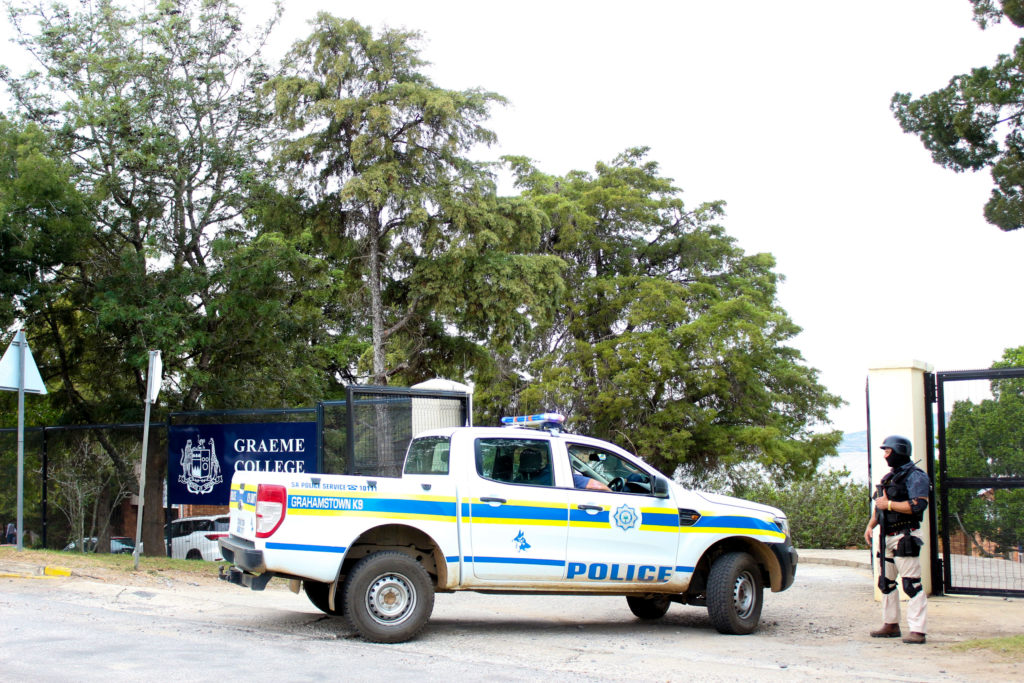 Police arriving to monitor the situation at Graeme College speak to a tactical response officer guarding the gate on Tuesday 25 May. Parents rushed to fetch their children as groups in taxis went from school to school, ordering them to close. Photo: Sue Maclennan

Speaking after a meeting outside the City Hall around 2pm Tuesday, the Uncedo taxi association’s Lungile Sixaba said a three-person delegation sent by Premier Oscar Mabuyane was scheduled to arrive in Makhanda around 1pm Wednesday. Following a meeting with the Mayor and officials at the city hall, they would proceed to Fingo Square on the corner of Raglan Road and Albert Street (“kwaJackie”) to address community members.

The meeting followed a morning of tension and chaos, as groups drove around town in minibus taxis, forcing CBD businesses and schools to close.

At Kingswood College, one of the first schools targeted, children were evacuated to a safe area on the campus when a group, blocked at the gate by security, began climbing over the fence.

Catering staff were removed from at least one independent school, as well as the University. While Rhodes students were issued with meal vouchers, the closure of shops meant they had no food.

A large contingent of police along with tactical response from a private security company sped to St Andrew’s Prep, when several taxis arrived later on in the day and parked across Leicester Street.

At Rhodes University, students were ordered out of laboratories and classrooms and the campus was effectively closed.

At Eastcape Midlands College, students said they were threatened and forced to leave the examination room, midway through writing an important exam.

GMD has not heard reports of physical assault, but there were many reports of frightened staff at businesses and distressed children at schools.

Pharmacies were among the businesses forced to close and one doctor said patients had been unable to get prescribed medication.

Barricades of rocks and burning tyres and rubbish blocked intersections across the city and drivers who tried to get past or through were turned back. Groups of protesters reiterated the service delivery failures that prompted the shutdown.

Smoke from the fires lingered well after the protests were finished and into the night.

In a letter signed by co-chairs Professor Owen Skae and Dr Vicentia Kgabe, the MCU says, “We write to you express our profound concern at the debilitating state of Makana Municipality, and urgently request for your intervention in the rapidly deteriorating situation that has prompted protests over the past two days (24th & 25th May).”

The MCU said while, for the most part, this protest action had been done peacefully and within the law, Tuesday had been marred by violence, destruction of property, threats, and intimidation.

“Businesses have now been forced to close, examinations have been suspended, vital health services cannot be delivered, and students are not able to access food. This cannot be condoned.”

The MCU says the protests are driven “by the Municipality’s failure to effectively deliver basic services to its residents”.

In a statement issued Tuesday, the UPM affirmed its participation in the demonstrations convened by The Border Alliance Taxi Association (BATA) and Uncedo Taxi Association.

“We have always championed a peaceful protest that upholds the rights of all citizens and we continue to believe so,” the UPM’s Ayanda Kota said. “We abhor and denounce any form of violence that violates people’s constitutional rights.”

Kota said the UPM endorsed the call that Eastern Cape Premier Oscar Mabuyane must come and account to the community of Makhanda.

“He has failed his constitutional obligations. He has defended the rot in Makhanda. We don’t recognise the Makana Municipality Council,” Kota said.

A letter addressed to the Mayor Mzukisi Mpahlwa and seen by GMD confirms that co-operative Governance MEC Xolile Nqatha has invited him together with Infrastructure and Community Services portfolio committee members and Directors, the Chief Financial Officer and the Municipal Manager to an urgent meeting in the Council Chambers at 1pm Wednesday 26 May. The meeting is to discuss the service delivery issues listed by shutdown organisers.

Lungisa Sixaba, of Uncedo and Wandile Duruwe, Regional Secretary of the South African Municipal Workers Union, were among those who addressed around 500 community members outside the City Hall Tuesday afternoon. The group had marched from Fingo Square, where taxi operators and community members gathered from around 7am.

“Premier Oscar Mabuyane is sending a delegation to look at the problems surrounding Makhanda,” Sixaba said. “We are going to meet tomorrow and wait for them to come and address us. “

Taxi operator participants later confirmed roads would be blocked from 7am.

Asked about schools and businesses on Wedensday, Sixaba said “The shutdown continues until the MECs meet community members. We have no guarantee they will becoming, although they have sent emails to say they will be here. Until they arrive, the shutdown will [not be]suspended.”