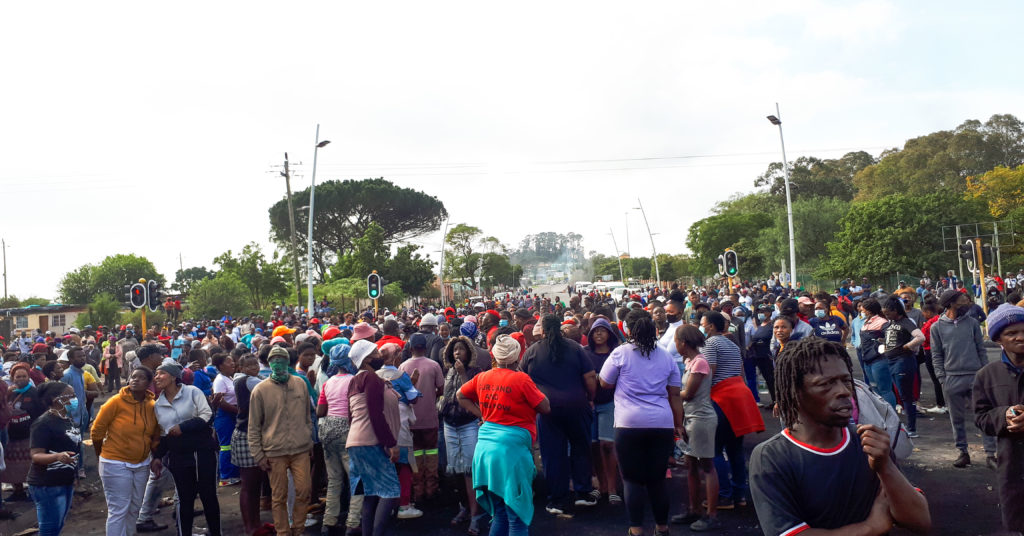 After three days of protests led by taxi associations and the Unemployed People’s Movement, the Makhanda shutdown was suspended late Wednesday 26 May; however, with some community members rejecting the decision, it’s possible some protest action will continue on Thursday. The UPM has meanwhile made a statement distancing itself from further protest action in this week’s shutdown.

However, after the taxi associations claimed the meeting they had called was being “hijacked”, everyone was asked to leave the room for further discussions except the SACP, SAMWU, Sanco and themselves.

An hour before sunset, they emerged  with an agreement in principle to suspend the citywide blockade on the basis of a 14-day deadline for various commitments by the Province and the municipality. The Premier and Nqatha are to come to the Indoor Sport Centre Makhanda on 15 June to tour the town, speak to residents and see the state of the infrastructure for themselves.

SACP’s KK Chule Papiyane District deputy chairperson Bongani Hanise and SAMWU regional secretary Wandile Duruwe led a delegation to address an increasingly restless crowd of community members. Many had been waiting at Fingo Square since mid-morning, expecting to be addressed by provincial government representatives and their reportback did not go down well with a large section.

“Some were not happy with 14 days,” said a community representative present during the announcement. “They said they wouldn’t stop the protest because the MEC never came and spoke to them.”

Later, Sevenfountains residents blocked the N2 with burning tyres and reports emerged that protesters who blocked the R67 at Martindale on Wednesday planned to resume their barricade on Thursday.

Addressing the media after the meeting, Nqatha confirmed the 14-day deadline. He briefed media on the Municipal Manager’s reportback to the MECs about progress in infrastructure construction, refurbishment and maintenance.

However, he said the municipality needed to communicate more effectively and the Mayor would lead a process to ensure residents are kept updated on infrastructure.

“We call for calm,” Nqatha said. “No demands can justify the destruction of property. Whatever grievances there are, we ask the community to follow due process.  But we have to up our game as government in terms of our responsiveness.”

“We agreed that we will open everything,” Waka said. “People must be able to go anywhere – work, shops, schools, even out of town.

“Taxis will be operating as normal,” Waka said.

Meanwhile a statement from the UPM said that as from Wednesday it was no longer participating in the current demonstrations. The statement, signed by Ayanda Kota, said as far as the UPM was concerned, the community’s message had been conveyed to Makana and the Provincial government.

“There are a number of social media news bulletins suggesting that the Unemployed Peoples Movement (UPM) is leading the present protest action in Makhanda and that the UPM is insisting on further protest action by keeping businesses, schools, and other institutions closed,” Kota said.

“The UPM condemns in the strongest possible terms any illegal actions that took place during the protests and does not condone such actions at all. Regrettably, opportunists have seized the opportunity of the protest to cause violent disruption and effect intimidation of citizens, which was never the object of this protest.”

Incidents on Wednesday included the setting fire to entrances to the City Hall, Joza Post Office and Joza municipal offices (Housing Department). All were extinguished before causing serious damage.

Local police were reinforced by teams from East London, Queenstown and Cradock. A water cannon truck was also brought into town. A large contingent was stationed between the group of community members in the intersection, and the main Raglan Road access to town.

Taxi operators were furious after police fired stun grenades and rubber bullets in the Fingo Square intersection around 8.30am. Shutdown co-organiser Lungisa Sixaba said it hadn’t been clear why the police had acted and vehicle owners complained of dents left by rubber bullets.

Several public schools have said they will remain closed tomorrow and re-open on Friday.