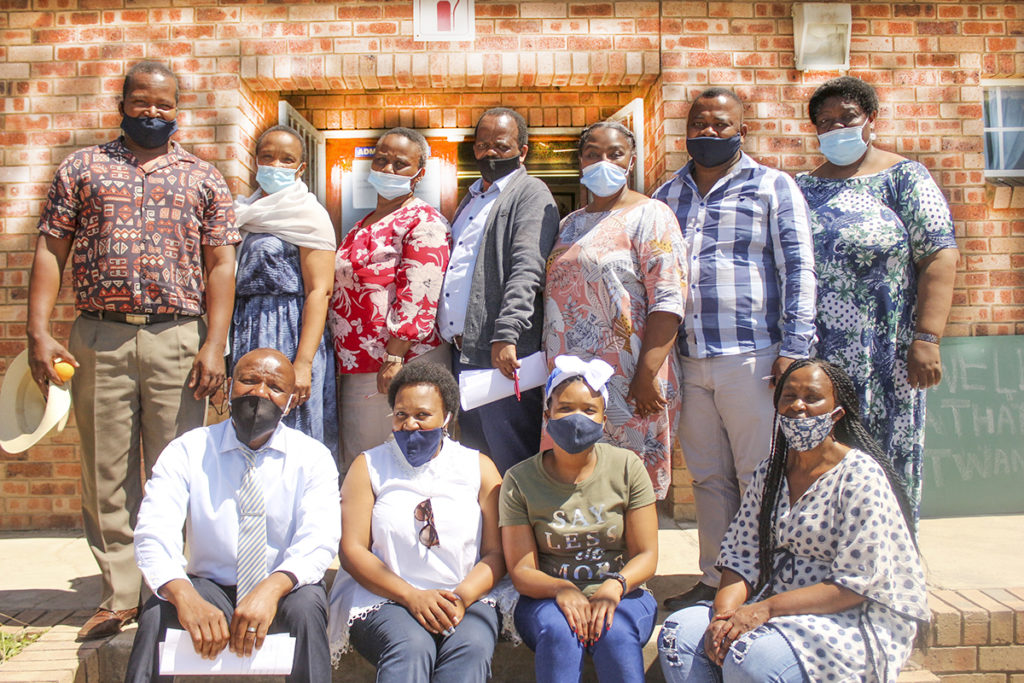 Highly motivated  learners who had each other’s backs;  teachers and principals who gave their all; strong support from the business and education community, and parents who bought into the project are the common factors among Makana’s record-breaking Matric 2020 schools.

“What excites me most is not so much the growing quantity, but the improved quality of our passes.”

A Bachelor pass means a high enough mark to make you eligible to apply to University. And that’s the gold that Khutliso Daniels Principal Radio Mcuba is after.

“It means the way is open for these children: they’ve paved their way to higher education and qualifications that will count.”

From one Bachelor pass among the 2019 matriculants, there were 10 in the school’s 2020 cohort.

“We’ve never had a group with such a high work ethic,” Mcuba said. “Actually we knew already when this group was in Grade 10 that something big was coming.”

Mcuba and his staff were aiming for an 80% pass rate, but are delighted with 78% – a 28 percentage point improvement on last year’s 50% pass.

“The attitude of the learners and support from the parents has made it possible,” Mcuba said. “And the fact that we have a common vision .”

Mcuba is clear on his role.

“It’s my job to create a conducive environment – to make sure the learners have the right support, that they have meals.”

Mcuba enjoys strong support from township businesses  whose owners see the value of the extraordinary work the school is doing. It’s made it possible for him to organise food for the children to see them through their extra classes.

“That monthly top 10 ceremony did so much to motivate the children,” Mcuba said.

Discipline and consistency characterise Mcuba’s leadership style. “That means the teachers are free to focus on teaching.”

“It’s my job to make them understand that it’s their life and their future, and in the end, it pays.”

“We all made lots of sacrifices,” she said. “We came on Saturdays and after school to support our learners.”

Maths and Economics were two other subjects that saw improvement.

Support from Gadra Education had played a big part in the school’s success.

“Everything from how to manage an organisation to ideas for collaborating with Dr Mabizela’s initiatives at Rhodes University.” Mcuba said.

No one was giving up on them

Earlier on Tuesday, Rotarians had handed over a brand new R2 million toilet block to the school in recognition of the valuable role it plays in the community, and the dedication of its staff and learners to academic achievement.

Outside were the 2020 matrics – who achieved an 85% pass rate and nearly doubled their Bachelor passes.

“This is the biggest number of kids we’ve ever had coming to fetch their statements,” Schoeman said.

“The staff and learners did so well for keeping on despite a very tough year,” she said.

“The staff taught throughout lockdown. We used Whatsapp groups for our learners – we bought them data if they couldn’t afford it.

“I think it was important that the kids felt no one was giving up on them. We all made those matrics our number one priority – and they really delivered the goods.

English teacher Michelle Barnard couldn’t stop smiling. She and   fellow matric English teacher Carmen Brandt were thrilled with the nine As in English – “from never before” Barnard said.

Like Khutliso Daniels, the school enjoyed extensive support from the community, as well as the Rhodes/ Gadra mentors.

In the face of great uncertainty

Another school quietly and steadily making its mark is Hendrik Kanise Combined School in Alicedale and Principal Monde Miyona is thrilled with their 93% matric pass rate.

“We have an exceptional group of dedicated teachers,” Miyona said. “Actually I call them the A Team: not a single day’s absence plus they provide afternoon classes, weekend classes and study sessions.

“They helped our learners make it against all odds and in the face of great uncertainty.”

Incremental improvement is what Miyona aims for and year on year, that’s what the school has achieved with the support of NGO Sifunda Kunye, and neigjhbouring game reserves Shamwari and Amakhala.

“They really are the wind beneath our wings,” he said.

We invited other local schools to share their achievements and challenges and have included the responses we received.

What a topsy-turvy year! The VG class of 2020 has done themselves and the school proud with their final examination results, all in a year filled with grief, loss and uncertainty. From April 2020 the matric class was online and in communication with their subject teachers so no teaching time was lost and the class had the best possible opportunity to excel, and this they truly did!

What was the biggest challenge of the lockdown year?

Dealing with the immense sense of loss and grief within our community. Trying to negotiate a new system of teaching and learning on the fly. Constantly being in a heightened crisis management mode throughout the year.

What assets did you uncover or rediscover to help your matrics achieve despite the challenges?

Luckily the matrics had four years of preparation to develop resilience and grit. They also had an excellent Grade Head in Mr Sibusiso Mkhize, who guided them through a tough year. We recognised the importance of having appointed a full time psychologist to our staff and Ms Kaitlin Yendall has been an invaluable addition and helped the learners through the tribulations of 2020.

What is the plan for this year’s matric class?

We will provide what support we can. It is undoubtedly going to be challenging, but, after last year’s experience, we are sure that we can give them the support and grounding they need to do as well as they can this year. We are concerned that they did not write the usually rigorous external Grade 11 exams and that there is uncertainty around their applying for university.