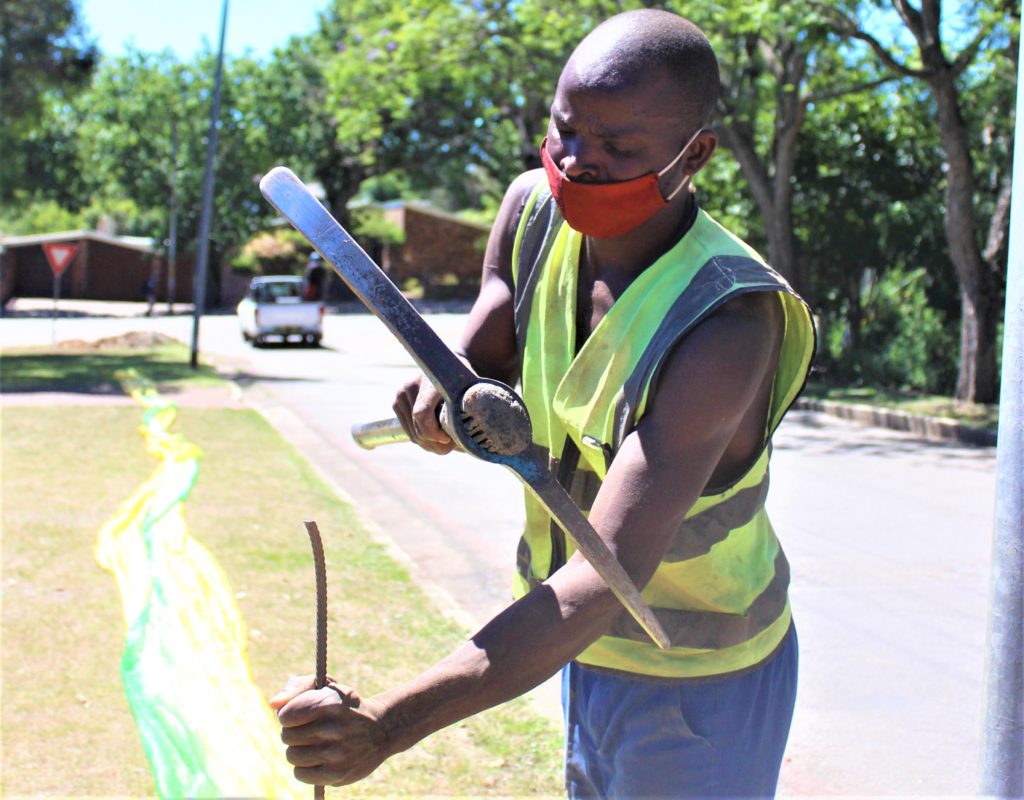 Jonathan Mawua erects a shadecloth barrier early on Thursday 21 January in preparation for digging a trench for Frogfoot optical fibre. Frogfoot and Herotel have begun rolling out the installation of optical fibre across a large part of Makhanda. Photo: Sue Maclennan

By the time of this year’s National Arts Festival, Makhanda should be alive with fast, reliable fibre-based internet.

That’s the plan, anyway, as fibre internet infrastructure providers Frogfoot and Herotel race for market share in the fibre-hungry town.

This week, Frogfoot contractors set up their trademark green and yellow shadecloth barriers and began digging cable trenches across the town.

“We’ve launched a major rollout across all the towns in the region,” said Frogfoot Regional Manager Marius Snyman.

By the end of April, Frogfoot anticipates having a large section of Makhanda live and ready for orders.

“There are extra challenges here,” Snyman said. “Port Elizabeth is full of soft grassy verges; here there is a lot of tar and asphalt. But we anticipate having the whole town done and dusted and ready for orders in June.”

Frogfoot, which had their wayleave approved by Makana in December, has divided Makhanda into four sectors and is working on all four simultaneously. :”We’re trying to complete it ASAP.”

When they’re done, they will have completed 107 kilometres of trenching and installed a total of 317km of fibre.

Frogfoot is a networking service infrastructure provider (NSIP). They have over 140 internet service providers (ISPs) who will sell on their fibre, in exchange for a percentage of the revenue they generate. For example, as resellers, local companies such as Geenet and Imaginet will be able to provide access to fibre for their customers.

Frogfoot are also offering a free FTTH connection of up to 1 Gbps to all schools in areas covered by Frogfoot Fibre.

The Herotel Fibre network in Makhanda will be built, operated, managed, and maintained by Herotel IGEN. Customers will have direct access to Herotel and can contact their local office directly without going through an ISP, Regional Manager Grant Fourie said.

Herotel, which recently bought IGEN, has a hybrid fibre network process. The main core and feeder cable is underground, while the network is aerial. This is done through putting up poles on the servitudes between houses – which requires permission from the property owners.

“We have a team going around obtaining permissions,” said Fourie. “So far we have 300 out of 1800 sites authorised by the owners.”

Resistance by some residents has proved a challenge to their goal of going live with a full fibre network by June. “We can only build what the community allows,” said Fourie.
By the time Herotel is finished they will have installed 22km of core fibre in trenches, with the remainder in aerial networks.

Herotel bought Igen which has around 1000 local customers. These would be migrated from a wireless connection to fibre, Fourie said.

A fibre installation in Makhanda a few years ago elicited fury from residents and businesspeople when the contractors ripped up tar across the town to install networks – and left without restoring it.

How accountable would Frogfoot and Herotel be when it came to restoring disrupted infrastructure, GM Direct asked.

“Herotel does our own planning, we work with our own staff and sell directly to our consumers,” Fourie said . “We commit to leaving the infrastructure in the same, or better condition than before.”

Frogfoot’s Snyman said, “We have a good relationship with the municipality and our wayleave conditions include rehabilitation and reinstatement.

“Once the installation is complete, we will do a thorough inspection with Council. If they are satisfied and we are satisfied, only then will contractors be paid.”

Snyman said the fibre installation was a long term investment and for that reason they would be settling into town with a maintenance team.

The elephant in the room

A glance at the immediate network planning for both new fibre providers, Frogfoot and Herotel, makes it obvious that no fibre networking is planned for township areas during this phase of installation.

A local IT expert who asked not to be named, said, “Building a fibre network is very capital intensive. No investor will put in that capital without a return. So they will install fibre where people are able to pay for it.

“This economic gravity is being played out in every town across the country and the world.”

“In the first phase, we are putting a service in place in areas where we can realise a return on our investment. We are in negotiations with the municipality to bring fibre to other areas in the next phase,” Fourie said.

“HeroTel IGEN also has capacity to serve the townships with wireless connections until a fibre network in the area becomes available.”

Frogfoot has a similar plan.

“We are investing a substantial amount to put fibre in. Based on uptake and return on investment, we plan to reinvest and spread the network to other areas,” said regional manager Marius Snyman.

Internet services in Makhanda’s townships is a vision Khula Tech Solutions invested in two years ago. They have made it their business to provide internet services to township clients, along with their “town” customers.

“All the companies were focusing on the suburbs and the CBD,” finance manager Chenjerai Sangarwe told GM DIrect.

Without the substantial capital needed to install fibre, they’re likely to partner with one or more of the bigger players down the line.

“We had the vision early on to bring internet services to township and rural areas in South Africa, where there isn’t sophisticated infrastructure,” Sangarwe said. ”By jumping on board with fibre providers, we can offer a better service, but still at our competitive prices.”

For now, though, their primary delivery is wireless – “high point to high point” – says Sangarwe.

Their latest offering is once-off hotspot connections across the town.

“We realised not everyone can afford data packages, or wifi installation at home, so these hotspots are an alternative.”

Like Khula Tech, Geenet is primarily a wireless service.

Owner Mike Wisch said Geenet have initiated their own fibre network, however.

“Obviously we don’t have the budget or manpower of Herotel or Frogfoot,” Wisch said. “So we’re going to be linking up all the complexes where we have existing infrastructure first – mainly down here in the CBD, then rolling out into the suburbs.”

It means Geenet won’t have to pay line rental to an infrastructure company and their customers will enjoy that cost saving, Wisch said.

Where Frogfoot is in place, Geenet’s clients can sign up for Frogfoot fibre through them.

“The flipside is that fibre isn’t for everyone,” Wisch said. “It doesn’t come cheap. There’s an installation cost involved to put fibre into your house.

“We’re also a lot more flexible for our clients – you can go month by month, we can adjust to your individual budget and needs. So there’s still a market for what we do.
Geenet will migrate their existing clients from wireless to fibre. Unfortunately that will be at a slower pace than what Frogfoot and Herotel are able to roll out.”

If you have a service provider here in Makhanda, you don’t have to leave them in order to enjoy the fibre that Herotel and Frogfoot are laying down. Most are able to provide access to those networks and you should discuss options with them.

How do you choose an internet service provider?

Wireless, fibre or ADSL? With so many internet options in Makhanda now, how do you choose? GM DIrect asked Rhodes University’s acting network manager, David Sieborger for help understanding the local ISP landscape.

“Choosing an internet service provider depends on where you are, and what your budget is,” says SIeborger.

Every internet service in town is connected to their (national) source provider by fibre – and for that primary connection, fibre is the only option.

“Vodacom, MTN, Telkom, Rhodes University, Geenet, Khulatech – every one of those ISPs must first have fibre linking them to their out-of-town source,” Sieborger explained
Then, every Makhanda based internet source must link to their local customers in one of three ways (or a combination):
• Fibre to home
• ADSL via copper phone lines (being phased out by Telkom because of slower speeds and maintenance challenges)
• Wireless transmission by radio-wave links – either through their own channels, such as Geenet, Imaginet, Khula Tech Solutions and Igen, or through the licensed spectrum available through (for example) MTN, Vodacom and Cell C’s data services.

“As a customer, fibre is definitely your first choice – that is, if it’s available and you have the budget,” Sieborger says.

Both fibre optic and ADSL providers can offer an uncapped connection.

“That’s a big deal for a lot of people,” Sieborger says. “People are not good at anticipating how much data they need and uncapped takes away the stress of planning.”

If uncapped fibre or ADSL isn’t available, or you can’t afford it, then the next thing to look at is, “Who will give you the most data for your budget, and who offers the most reliable service.”