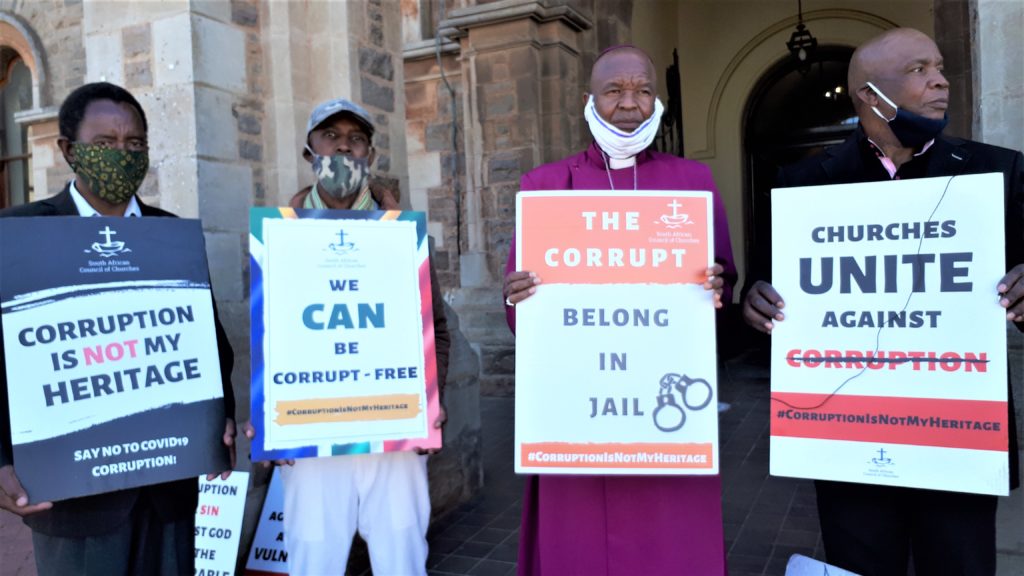 Lindile Jela, Sizwe Mda, Bishop Nkosinathi Ngesi and Sky Albany held a silent vigil against corruption and other concerns about the municipality outside the City Hall on Wednesday 30 September. Photo: Sue Maclennan

“We cannot fold our arms anymore as if there is nothing that is happening.”

These were the words of five protesters who on Thursday held a silent vigil against corruption outside the City Hall in Makhanda.

The South African Council of Churches launched its anti-corruption campaign against the looting of Covid-19 funds last month and the vigil was in association with this.

“We cannot fold our arms anymore as if there is nothing that is happening,” Reverend Nkosinathi Ngesi told Grocott’s Mail. “It affects us; it affects the economy of the town.”

Alongside Ngesi, who is the Bishop of the Ethiopian Episcopal Church, were members of the Makhanda Legends group of former anti-apartheid activists, Sky Albany and Lindile Jela, along with Reggie Waldick and Sizwe Mda.

“We want to address the question of corruption that is happening within our municipality,” said Ngesi. “We are very much concerned because there is no service delivery in Grahamstown. The roads are collapsing, there’s no water. There’s big corruption that’s taking place there within the municipality.”

In addition to corrupt activities, the group says, is a dysfunctional leadership.

“We have the Mayor and the MM – but they are not on speaking terms: they are pulling in different directions.

“How can you expect a house to stand when the leadership of that house is not speaking to one another?

“As early as March this year, questions were asked as to why she is actually overpaid and how are they going to recoup the money,” said Albany.

Before he left Makana, former Technical and Infrastructure Services Director Dali Mlenzana was suspended pending investigations into his approving an increase in salary for Mazwayi, among other allegations. At the time Mlenzana was acting municipal manager.

“The very same Corporate Services director is leaving for Sakhisizwe Municipality on the 8th of this month. They are transferring a problem from one municipality to another.

“We are born and bred in Grahamstown. Grahamstown is close to our hearts. So we want action to be taken before she leaves.”

Grocott’s Mail understands Mazwayi is set to take up the post of Municipal Manager in Sakhisizwe. Sources at that municipality confirmed she was “around” in the Cala offices on Monday 5 October.