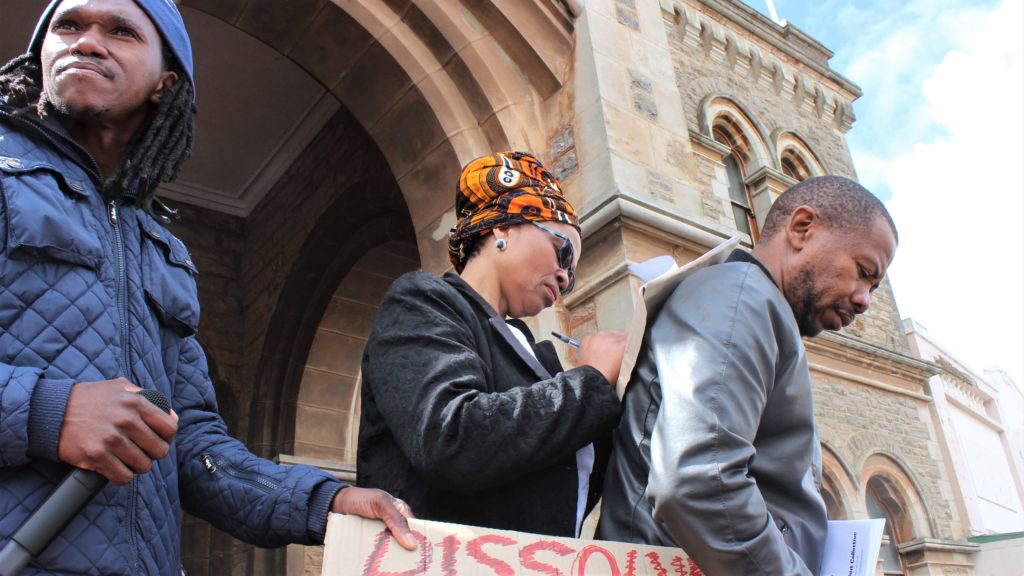 Outgoing Makana Corporate Services Director Nomthandazo Mazwayi uses the back of the Unemployed People's Movement's Ayanda Kota to sign a petition from the organisation in this November 2017 file photo.Photo (November 2017): Sue Maclennan

Two months ago, a report tabled to Council recommended that Makana Municipality’s Corporate Services Director Nomthandazo Mazwayi  be put on compulsory leave pending the investigation of misconduct allegations. Soon after, she resigned. By the end of this week, Grocott’s Mail understands, she will take up the post of Municipal Manager at Sakhisizwe Municipality.

Public service watchdog PSAM has questioned why Council failed to support the recommendation for Mazwayi’s suspension, and why her resignation was accepted.

One of the misconduct allegations regards Mazwayi’s  salary being increased by former Technical and Infrastructure Director Dali Mlenzana. Grocott’s Mail previously reported that Mlenzana was placed on precautionary suspension on 25 July 2018, pending an investigation into alleged financial and administrative irregularities. Mlenzana signed off on the alleged irregular increase during one of several periods when he was acting municipal manager.

The Makana Council agreed to an out-of-court settlement with Mlenzana’s lawyers.

Two years later, in 2020, a confidential report to the Council meeting of 8 August from the Municipal Manager recommended an investigation into Mazwayi on the basis of allegations made by a whistleblower group. In his report to Council, Municipal Manager Moppo Mene says, “The Director has been accused of several issues related to misconduct in the [whistleblower letter]and those issues require an investigation so that Council can take a decision on a course of action. It is then proper that Council allow her to be off the workplace for the process of perusing any document required to be undertaken.”

Raised against the Director, says Moppo Mene in the report, are the whistleblower allegations, as well as “Insubordination allegations as per the document; and Performance”.

Grocott’s Mail understands that the whistleblower allegations refer to the alleged  irregular salary increase for Mazwayi signed off by Mlenzana.

The Council should finalise the investigation within a month, Mene says in the 8 August report, referring to the Municipal Systems Act 32 of 2000 (Regulations related to Disciplinary Procedure for Senior Managers).

In a telephone call on Friday 2 October, Mazwayi confirmed to Grocott’s Mail that she had resigned. She did not confirm her appointment as municipal manager as Sakhisizwe; however, two sources at that municipality subsequently did.

Mene confirmed that Mazwayi’s resignation had been accepted; however, he emphasised in a subsequent interview that it was not he who had accepted the resignation but the Council.

The Municipal Systems Act says allegations of misconduct of a senior manager must be tabled in Council by the Mayor or Municipal Manager within seven days of receipt of the allegations.

Grocott’s Mail sent questions to spokesperson for the Department of Co-operative Governance in the Eastern Cape, Mamkeli Ngam. Ngam referred these to the District Municipality (Chris Hani) who referred them to Sakhisizwe Municipality’s communications officer. We asked for confirmation of Mazwayi’s appointment at Sakhisizwe. We also asked whether they were aware of the proposed investigations at Makana, as per the Council report, and whether this might affect on Mazwayi’s new position at Sakhisizwe.

The same questions were put to MEC for Cooperative Governance Xolile Nqatha via his media liaison officer. No response had been received from any of those entities by the time of publishing.

A source told Grocott’s Mail the recommendation to suspend Mazwayi had been tabled at the 8 August meeting; however, it had “got stuck” in Council. “It was about to be acted on when she resigned,” the source said.

The Municipal Manager Moppo Mene, in an interview on 7 October, said, “It was Council’s decision to accept Mazwayi’s resignation, not mine. Council did not understand the procedure. According to the disciplinary procedures for senior managers a matter must come to Council in seven days.
I recommended she be put on compulsory leave. What should follow is 30 days during which the allegations are investigated and affidavits made.

Sources at the City Hall confirmed to Grocott’s Mail on Wednesday 7 October that Mazwayi had not been at work for three days. Sources at Sakhisizwe confirmed last Friday that their new municipal manager was “around”.

Grocott’s Mail can confirm that the Mayor of Sakhisizwe Municipality, Mrs Buyiswa Ntsere, has been made aware of the allegations.

Director of the Public Service Accountability Monitor (PSAM) Jay Kruuse questioned why the Council failed to support a recommendation to suspend an official implicated in serious allegations.

“An employer is not obliged in law to accept a resignation, especially where the employee resigning has serious allegations against them that may warrant the institution of disciplinary action,” Kruuse said.

“Under such circumstances an employer is within their rights to suspend the employee and to in due course hold a disciplinary hearing to determine whether the allegations are true and if so, what disciplinary consequences should follow.”

A stable life: bringing us back to balance