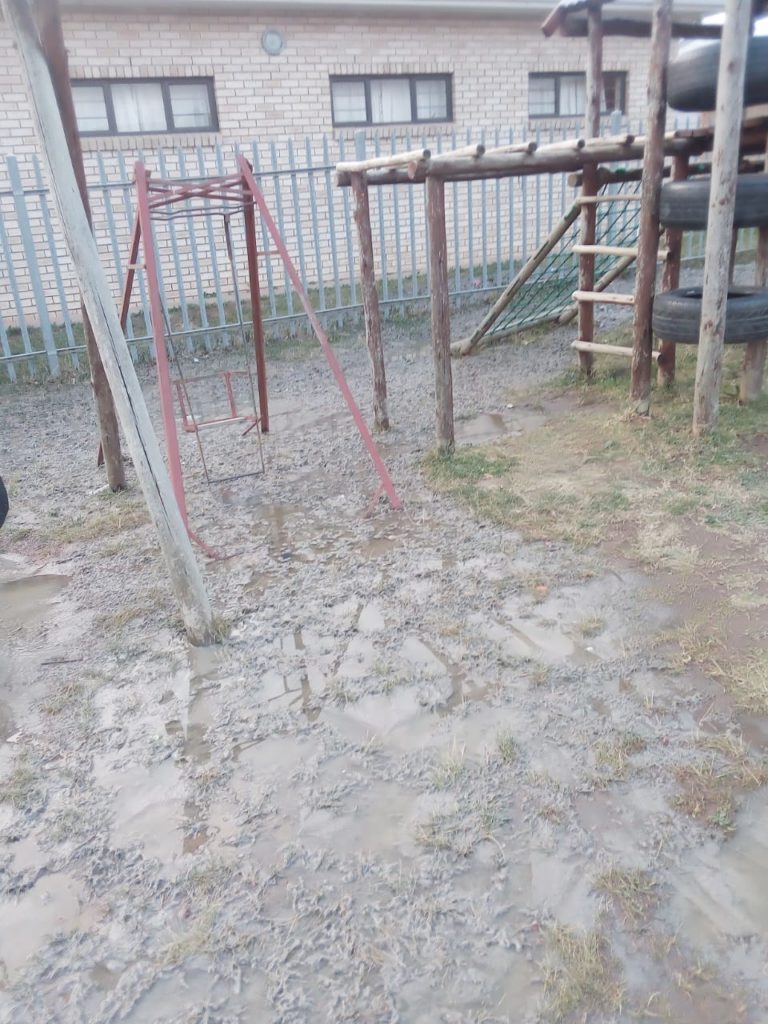 Fourteen children living at the Ikhaya Losizo foster homes in Joza had to spend the weekend indoors thanks to a massive sewage spill that flooded the grounds on Saturday 5 September. House mothers says they’ve lost count of the number of times sewage has spewed from an inspection cover close to the complex.

The cluster homes are currently home to 14 lively and active children – all under the age of 10. They are the culmination of a long-held dream to create a family environment in a safe space for Makhanda’s vulnerable children. Community members raised funds for the facility which, together with the adjacent Nompumelelo Pre-school, is managed by Child Welfare Grahamstown.

The organisation spent around R10 000 having the adjacent sewer redirected, so it wouldn’t overflow into the home’s grounds. But staff say no maintenance is carried out on the line, and so it keeps getting blocked and overflowing.

“These manholes are supposed to be serviced by the municipality,” said one frustrated social worker. “Even if we call a private plumber, we’re told to call the municipality.”

Bischoff said a plumber from the municipality had eventually come late on Saturday.

“We’re not sure if they’ve fixed it. We will just have to see [on Monday],” she said.

The last time this  happened, the municipality had told Child Welfare they couldn’t fix it because their hydroblaster wasn’t working. RS Plumbing had kindly helped them free of charge.

Bischoff said they had tried everything in their power to have the problem permanently solved, to no avail.

“I’ve been in tears  in the office of the municipal manager,” Bischoff said. “I truly have lost count of how many times this has happened. It is unacceptable.”

Faeces, used toilet paper, sanitary towels and condoms are spread across the children’s back yard, and liquid sewage has formed a lake that is almost knee-deep in places.

Bischoff said she’d hardly slept, worrying about the children on Sunday night. Staff on Monday informed her that municipal staff and a councillor had come to the site to clear the blockage.

But the faeces and liquid sewage remain, along with the used toilet paper.

“They said they can only clear that up when the liquid dries,” Bischoff said.

Thankfully, the children were at school for the morning.

“But when they got home, they had to just sit inside instead of playing in their garden.”

On past occasions, the municipality has brought powdered lime to serve as a disinfectant; however, this time, they had none. “So even once it has dried out and they clear up the sewage debris, they have nothing that will make it safe for the children to play in the yard again.

Grocott’s Mail has requested comment from the municipality and will include their response when we receive it.