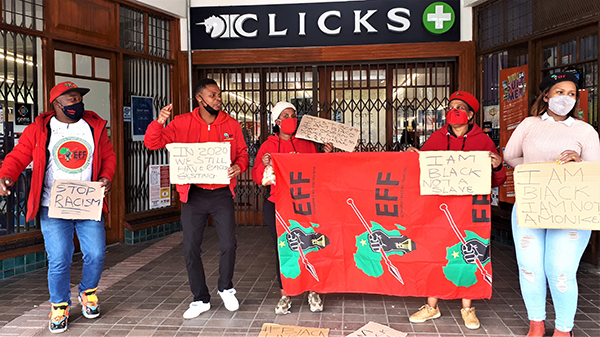 EFF supporters protest outside Clicks in High Street, Makhanda, on Monday 7 September. The retailer has apologised for an advertisement flagged as offensive, suspended those responsible for it and says it will take measures to ensure the safety of staff and customers. Photo: Sue Maclennan

Clicks says it will take steps to ensure the safety of staff and customers at its stores. Branches of the retailer across the country were forced to close amid protests by EFF supporters on Monday 7 September.

In Makhanda, a group of six EFF stalwarts held up placards and sang outside the retailer in High Street in support of the party’s national campaign. EFF leader Julius Malema had called on his party’s followers to “attack” more than 880 Clicks stores across South Africa, after an advertisement they said was racist appeared on the retailer’s website last week.

The advert, which has since been removed, depicted the hair of a black woman as being ‘dry, damaged, frizzy and dull’ against that of a white woman, which is described as ‘colour-treated, fine, flat and normal hair’. Commissioned by the hair company TRESemmé, it was taken down on Friday after UnileverSA/ TRESemmé realised it had “a potentially discriminatory connotation”. On the same day, Unilever published an apology on its website.

In its 4 September statement, Unilever said: “We are very sorry that images used in a TRESemmé SA marketing campaign on the Clicks website promote racist stereotypes about hair. The campaign set out to celebrate the beauty of all hair types and the range of solutions that TRESemmé offers, but we got it wrong. The images are not in line with the values of our brand, or of Clicks. TRESemmé SA apologises for the offence these images have caused. We also apologise to the Clicks group.”

In an open letter issued 7 September, Clicks Group CEO Vikesh Ramsunder said, “I am deeply disappointed that we allowed insensitive and offensive images to be published on our website. I apologise unreservedly for the hurt and anger these images have caused… we took accountability for this error of judgment by issuing a public apology and swiftly removing the offensive material from our website.

“Over the past few days, I have reflected deeply on what it means to be a proudly South African corporate citizen and have consulted widely with diverse stakeholders to assist me in developing a comprehensive response to make amends for our error,” Ramsunder said.

“Already, the negligent employees have been suspended, and we have engaged the supplier, who has now also issued an apology. This incident has highlighted the need to audit all of our 3rd party (and our own) promotional material for any implicit or explicit bias as well as the need for diversity and inclusivity training for all of our head office employees. This will be urgently implemented.”

“As a company, we cannot change what happened, but we are learning from this. We are committed to effecting real, systemic change across our business that reflects our pride in being a truly South African company. We have done a lot in terms of transformation. This issue has clearly highlighted that we have a lot more to do.”

Ramsunder said Clicks would take precautionary steps to ensure the safety and well-being of their customers and our employees.

“This includes dealing with the threat of the disruption of our business activities and intimidation of our customers and employees.”

The EFF’s Siyabonga Bashe spoke to Grocott’s Mail outside Clicks on Monday 7 September. Echoing the party’s national call for accountability, Bashe said, “To the owners of Clicks, our demand is that the individuals who made the advertisement  must come forward and apologise. And that those CEOs who allowed the advertisement… must be dismissed.”

Bashe, who is a PR councillor in Makana Municipality, said, “It’s been too long that racism has been allowed to continue unchallenged. This is all about Black dignity. All Black lives matter.”

During the time Grocott’s Mail observed the protest, the group sang and held up placards with slogans including ‘Stop Racism’ and ‘I am Black, not a slave’. They told potential customers the store was closed because of their protest and engaged with members of the public, encouraging them to join the protest; however, the group remained quite small.

Grocott’s Mail understands that Clicks will not open its doors for trading on Tuesday and that the retailer’s national executives will meet with the EFF.