Floors, power and water a concern for Grahamstown Primary School 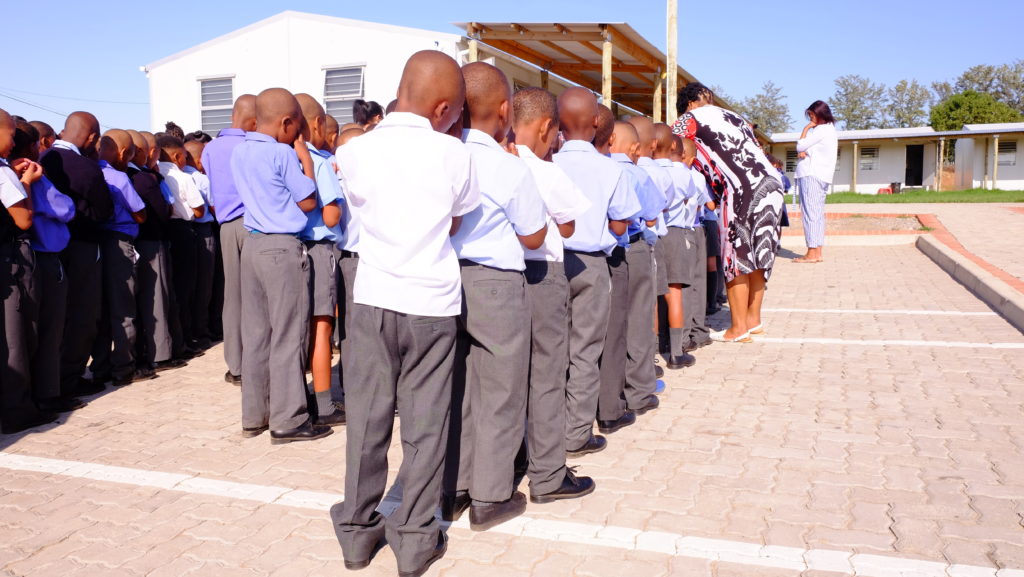 As eager Grahamstown Primary School learners streamed in for their first day of school on a sweltering Wednesday morning, the school still hadn’t heard from the Department of Basic Education about the fate of the stalled R55-million upgrade to its original premises.

Since February last year, the school has had to make do with temporary prefabricated structures adjacent to George Dickerson Primary premises. The revamp, originally due for completion in 2021, was to have included an administration block, a new library, an IT centre and a school hall.

Nevertheless, Grahamstown Primary’s Head of Department, Lucien Bartis said the school was open for business: “Teachers are all present, enrolments have been done, books and stationery are ready.”

“The main thing we are worried about is possible electricity outages, and also the water. We have one tank, but we really would like another one or two tanks and to connect them via a pump to the toilets,” Bartis said.

In June 2019, the contractors left the upgrade to the old school abruptly, telling Principal Leon Coetzee that they had not been paid by the provincial Department of Public Works, the implementing agent for the project. This came as a complete surprise to the school, as they had not been informed by the provincial Department of Education or of Public Works that funds were not available to pay the contractors.

It emerged last year that contractors have abandoned more than 50 major school upgrade projects in the Eastern Cape after government departments failed to pay them on time.

Many of these schools, including Grahamstown Primary, have been stripped of valuable materials and vandalised after being abandoned.

“After the contractor left, the [provincial education]department came and told us that the project had been stopped until further notice,” said Coetzee.

Despite the ongoing limbo, Lucien Bartis, says the only criticism he has of the temporary classrooms is that the floors are not very secure. “I am worried whether the floors will last,” he said.

“Apart from that, it is functional. We are better off than some of my colleagues, like those in Graaff-Reinet, who have been left high and dry.”

Mtima said that R260 million was paid to implementing agents in September 2019 in order to get contractors back on site, following a “cash injection from the national department”. However, work has not resumed at Makana Primary School’s original site.

In October 2018, the Eastern Cape branch of Equal Education released a report titled “Implementing agents: The Middlemen in charge in charge of building schools” which describes the effects of failures by implementing agents on learners and teachers in the province.

Implementing agents are in charge of “managerial and project implementation” for the provincial Department of Education, says Equal Education researcher Marc Jacobs.

“They are usually state-owned enterprises, public entities or non-profit organisations” which often directly oversee the building and repair of school infrastructure, he said.

“Implementing agents typically receive 4.5% to 10% of the cost of a school infrastructure project as management fees, regardless of their performance,” said Jacobs.

In the Eastern Cape, the provincial and national education departments and treasuries have failed to adequately monitor the delivery of school infrastructure. This is because they are “understaffed and do not have sufficient programme managers” to oversee the agents, according to Jacobs.

This lack of accountability leads to wasteful expenditure, and mismanagement of infrastructure sites, like that of Grahamstown Primary, he added.