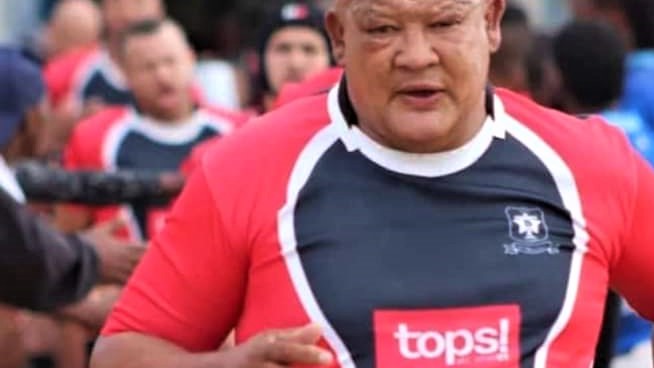 Selwyn Cannon was 10 years old when the Alexandria based Trying Stars rugby club was founded. Earlier this year, as the club celebrated its 50th anniversary, the formidable prop finally hung up his boots and celebrated his 60th birthday. Chesley Daniels reports.

The Eastern Province Rugby Union (EPRU) recently honoured the legendary rugby player Selwyn “Skallie” Cannon at their Annual Prize Giving Awards in Port Elizabeth. Cannon was honoured by EP Rugby for his 44 years’ service to Trying Stars and club rugby in the Eastern Cape. Skallie received a standing ovation at the prestigious event that was attended by hundreds of rugby enthusiasts.

The 60-year old veteran was born 29 September 1959 at Suurplaas in the district of Alexandria in the Ndlambe municipal area. He started playing club rugby at the age of 16 years until his retirement at the age of 60 in October this year.

Cannon started his rugby career for Trying Stars RFC in 1975. After a brief spell at Glen Roses RFC in PE in the early 80s, he returned to Trying Stars, where he played until his retirement in 2019.

He started his rugby career as a centre and moved later to play as a loose forward. During the latter stages of his career he permanently covered both loose head and tighthead prop. A force to be reckoned with, he represented Sedru and EP B in his heyday. During the latter part of his career, he held various positions within the executive of Trying Stars RFC and was a loyal servant to the club.

Cannon played rugby for an astonishing 44 years. His last game was against Evergreens SC from Cradock on 19 October 2019, three weeks after celebrating his 60th birthday.

During his rugby career, Cannon played with his four brothers (Loftus, Nesbitt, Cowan and Estman), as well as with his three sons (Sheltyn, Sheldrid and Shelwyn) in the same team. Cannon played his  last game alongside his grandson Selwyn Jnr, who like his grandfather plays prop and is set to fill his big shoes.

Selwyn Senior played while two of his sons held the position of coach at Trying Stars RFC. He played a major part in the success and development of the club and a huge role in the promotion of the club to the Grand Challenge competition of EPRU. He also played with the club in the then sub-union, Micky Yili, and was one of the standout players for Stars.

Shelwyn regularly assisted the club with transport to away games with his bakkie and truck.

He put a fullstop on his career as Trying Stars ended 5th in the Twizza Super League this year.

When Trying Stars was established Selwyn Cannon was 10 years old. This year, he celebrates his 60th birthday and the club’s 50th birthday.

Skallie grew his reuptation as an aggressive, hard and strong rugby player, with a no-nonsense approach. On the field, he iwas afraid of no one and was feared for his “in your face” approach. He always gave his best on the rugby pitch.

Cannon intends to remain involved in the game at the club and has promised to assist them with coaching.

“I will always love the game and want to be involved in the development of the club. I also want to thank my family and fellow members of the club for their fantastic support over the years,” he said.