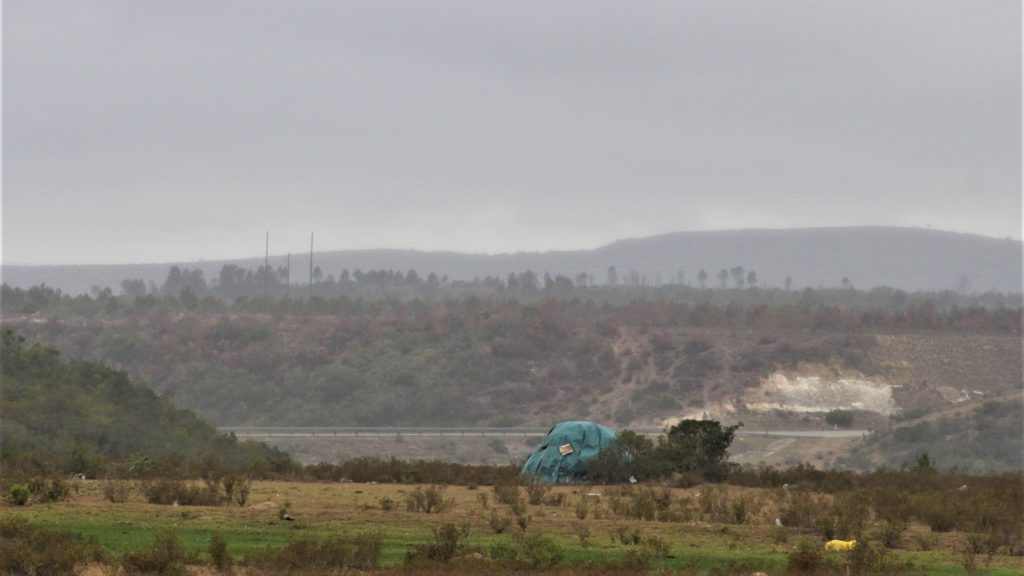 An initiates' hut on the outskirts of Makhanda during welcome light rain on Saturday 21 December 2019. The Local Initiation Forum is keeping a close watch on 364 boys registered to undergo ulwaluko this initiation season. Photo: Sue Maclennan

No injuries or deaths were reported among the 364 boys undergoing traditional initiation in Makana Municipality during the December 2019 initiation season, said Local Initiation Forum co-ordinator Ramie Xonxa. Grocott’s Mail asked the councillor questions about the welfare of local abakhwetha following the deaths of 23 initiates in other parts of the Eastern Cape.

The Portfolio Committee on Cooperative Governance and Traditional Affairs (CoGTA) in called for an investigation into the deaths of the boys in eNgcobo and Komani. Shocking news from other parts of the Eastern Cape, along with the 23 deaths, has been the appearance in Komga Magistrate’s Court on Friday of 14 boys following the alleged murder of a 16-year-old fellow initiate this week.

On Tuesday, Eastern Cape Premier Oscar Mabuyane led a team that included Health Minister Zweli Mkhize and MEC Sindiswa Gomba to visit initiation schools in Komani and eNgcobo. Afterwards, News24 reported that Mkhize attributed most of the deaths to dehydration as a result of the cultural practice of restricting water consumption among initiates. Weather statistics for Queenstown (Komani) show temperatures during December this year of 30C and above on most days, with seven days between 35C and 38C.

Speaking to Grocott’s Mail on Friday, he had just returned from a visit with a delegation of parents and police to the eGolfini initiation site east of Vukani, where there had been conflict among a group of initiates.

“There was a misunderstanding among some of the initiates and they were about to fight,” Xonxa told Grocott’s Mail. “But one parent got wind of it and quickly went to the police station to report it. SAPS immediately dispatched a van.

“We called the initiates together to meet with the police and their parents and told them we don’t want any fighting there. It was resolved quickly.

“Whenever there’s a problem at any of the initiation sites, we quickly go there.”

Xonxa has previously attributed this municipality’s record of incident-free initiation to strong involvement by parents and guardians throughout the process.

Xonxa said of the 364 abakhwetha being monitored by the Makana Local Initiation Forum during this season, no health problems had been reported.

“Many have finished and are already going back home,” he said.

There would be a workshop at 9am on 17 January at Noluthando Hall for all amaKrwala (initiation graduates), where church representatives would talk to them about behaviour and society’s expectations of them.

Grocott’s Mail reported earlier this year that the Department of Health had introduced new rules for omiselwe ulwaluko – those who intend undergoing initiation. These included a compulsory health check at their local clinic during the September school holidays.

Initiation co-ordinator for the Department Makhi Mka said at the time this was in addition to the stipulations of the Customary Male Initiation Practice Act, including that boys must be 18, must register at their local clinic and must submit there to a full health screening before they are allowed to enrol at a circumcision school.

“Now they must also receive a full health screening at the clinic three months ahead of the initiation season,” Mka told Grocott’s Mail. This was to detect early signs of illness.

There are six initiation schools in Makhanda, and 13 in total including the surrounding areas of Alicedale, Fort Brown, Coombs, Seven Fountains, Salem, Riebeeck East and Radway Farm.

As per the Act, the safety and wellbeing of initiates is managed within local municipalities. In Makana Municipality the Local Initiation Forum is chaired by Ward 2 Councillor Ramie Xonxa, who every year draws together local representatives of the departments of Education, Social Development, Sports, Recreation, Arts and Culture, Home Affairs, the South African Police and NGOs.

The forum visits initiation schools in the municipal area ahead of the season, and monitors them while the initiates are in the bush.

The Portfolio Committee on Cooperative Governance and Traditional Affairs (CoGTA) on Friday condemned the death of the 23 boys in eNgcobo and Komani.

Committee Chairperson Faith Muthambi  said, “This could have been avoided if traditional practices such as water restrictions to initiates before and after the initiation can be reviewed from time to time to ensure that if they threaten the lives of the initiates in the fast changing weather conditions, they are discontinued.”

The committee has also called on the National House of Traditional Leaders (NHTL) to investigate the death of the initiates and urged the NHTL to come up with solutions on how to continue with the tradition of initiation in the changing climatic and weather conditions, to ensure that no lives are lost in the future. – Additional reporting from SA News