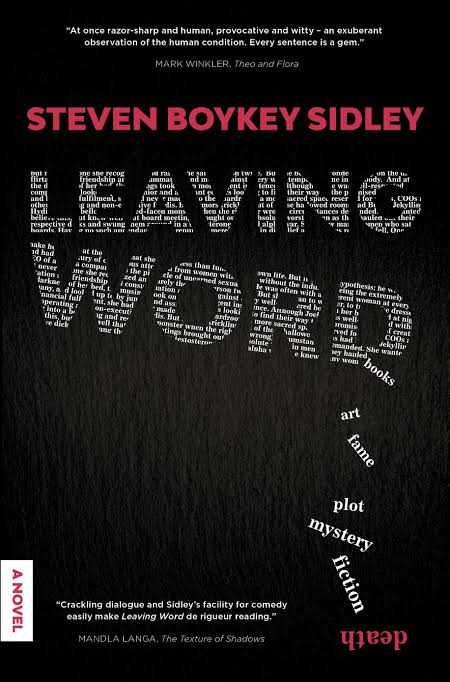 Joelie Jesson hates finely crafted plots. The Los Angeles-based book editor thinks they are antithetical to good writing; “a cheap conceit, pieces laid out higgledy-piggledy across the pages and then slotted and fitted and fastened over three hundred pages, like a piece of Ikea furniture”. Jesson thinks the world is “messy and incomplete and ambiguous and only loosely directed” and that the best stories are similarly so.

Joelie Jesson might not like Leaving Word by South African author Steven Boykey Sidley, even though she is the main character in the novel. It’s a bit short of three hundred pages, but it does have a finely crafted plot.

Jesson is a legend at CrossMedia, a prestigious publishing house, and is fired shortly into the story. She says she may have been fired because she refused to sleep with her CEO, Buddy Rappaport. Then she reveals that she had been drawn to Buddy since his appointment two years earlier and would gladly have slept with him if he had asked, which he didn’t, despite the two of them sharing some special moments.

After Buddy is found dead at his desk, no foul play suspected or investigated, things take a turn. There’s Detective Corelli, who is not investigating Buddy’s death but has been looking into Jesson and hopes she will edit the novel he has written — a novel that seems to make some claims about Buddy’s death, even thought it was written some months earlier. There’s Buddy’s older brother, Duke, an art historian and teacher who looks much like Buddy and has a potentially disturbing thing about Caravaggio and his use of light and shadows. And there’s the self-named Thron, formerly Tom, a sociopath whose presence in the story is unclear until much later.

I hadn’t heard of Sidley before Grocott’s Mail was sent a copy of his book to review, but I’m glad to have heard of him now. Leaving Word is his fifth novel, and I look forward to reading the other four. Two quibbles: One, Sidley doesn’t seem to set much store by place. Deon Meyer weaves South African locations into his novels. John Sandford does the same with Minnesota. Robert Crais and Michael Connelly treat Los Angeles like it’s a character in their stories. Sidley is a very different crime writer to any of those and, while I understand why he chose to set this novel in LA rather than, say, Cape Town, I think he could have said more about the location.

Second, there are a few irritating mistakes in the copy. They could easily be overlooked, but not when the central protagonist is a book editor.

TWO FREE COPIES OF LEAVING WORD
Grocott’s Mail is giving away two copies of Leaving Word. To enter the draw, tell us the name of one other of Steven Sidley’s novels. Email your answer by midday on Wednesday 11 December to community@grocotts.co.za with ‘Leaving Word giveaway’ in the subject line. Please include your postal address with your answer. The first two correct answers get the copies.