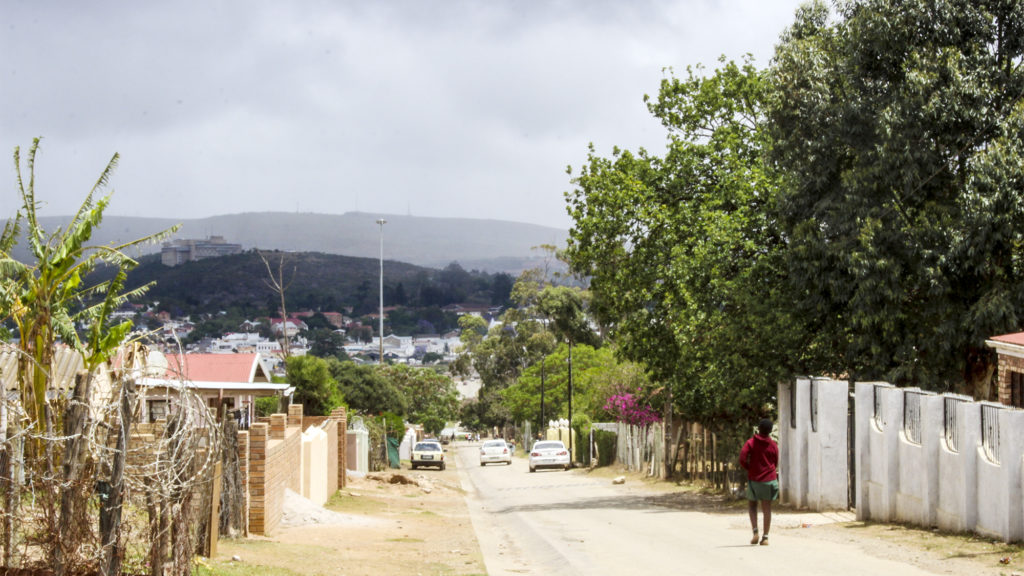 A peaceful afternoon this week in Victoria Street, Makhanda. 10 days ago this was the scene of a vicious homophobic attack. Photo: Sue Maclennan

Nine days after a horrific hate-crime attack in Makhanda (Grahamstown), with no arrests, and witnesses receiving threatening messages, the survivor and his friends remain in hiding, fearing for their lives. Meanwhile, police have confirmed that a counter-charge has been laid.

Makhanda woke up to the shocking news on Sunday 3 November of a vicious attack on well known performer Sisonke Yafele that had all the signs of a hate crime. The attack left the UBOM! actor badly bruised, with a deep gash in his thigh (they’d tried to chop off his leg with an axe) and severely traumatised. In a tragic twist, it was carried out less than 100 metres from, and just three weeks after Yafele’s close friend and fellow performer Ayanda Nondlwana was stabbed and died.

Yafele said the mob were shouting anti-gay invective and strongly believes homophobic hatred was behind the crime. He decided to speak out, choosing to be named and identified. This, he and friends hoped, would also serve as some protection.

The upper end of Victoria Street, where the mob attacked Yafele and his friends, marks the border between the city’s oldest townships, Fingo Village and Tantyi. It’s the area that Yafele, a born and bred Grahamstown (now Makhanda) resident calls home. But he’s terrified to go home – especially now that he has laid charges against those involved in the attack.

“That is my home area. I was born there, I grew up there – but it’s even hard to go and see my mom,” he told Grocott’s Mail today. Friends who witnessed the incident, likewise, are terrified to be seen in the area.

“I’m scared for my witnesses, I’m scared for myself, now we’ve opened a case,” he said. “The thing is, I might not be facing them: I might face other people sent by them.”

He and his friends are afraid to return to their own homes, let alone sleep there, for fear of further attacks. Sisonke himself is receiving trauma counselling.

“Already my friends have been receiving threatening Whatsapp messages from [the attackers],” he said. Several of those in the attackers’ group have been named in the case.

Meanwhile, it has emerged that a counter-charge laid at the Grahamstown Police Station may be behind the delay in making arrests.

Police spokesperson Captain Mali Govender today confirmed no arrests had been made and appealed for witnesses to come forward.

“A counter charge has been opened and is under investigation,” Govender said. “Statements of all witnesses will be taken and the docket will then be forwarded to the Public Prosecutor for a decision.”

Govender appealed for any person who witnessed the incidents to contact the Grahamstown Detectives or the crime stop number on 0860 010 111.

“It is extremely important that an accurate account of the incident is recorded to enable a fair investigation to take place,” Govender said.

Regarding the alleged conduct of the ambulance staff, Grocott’s Mail asked the Eastern Cape Department of Health what the correct protocol is in such a situation and whether disciplinary measures would be taken regarding the Emergency Medical Services staff involved.

Provincial spokesperson Sizwe Kupelo said the crew in question would return to work this Friday. “We have requested the district to investigate the matter,” Kupelo said.

Meanwhile, Yafele and his friends remain on the move, sheltered by friends and supporters.

“The only time we will be comfortable will be when we know [the attackers]are not there in Victoria Street,” Yafele said.

Previous ArticleLiving with disability – some tips for families
Next Article How risky is radiation from cellphones and towers?