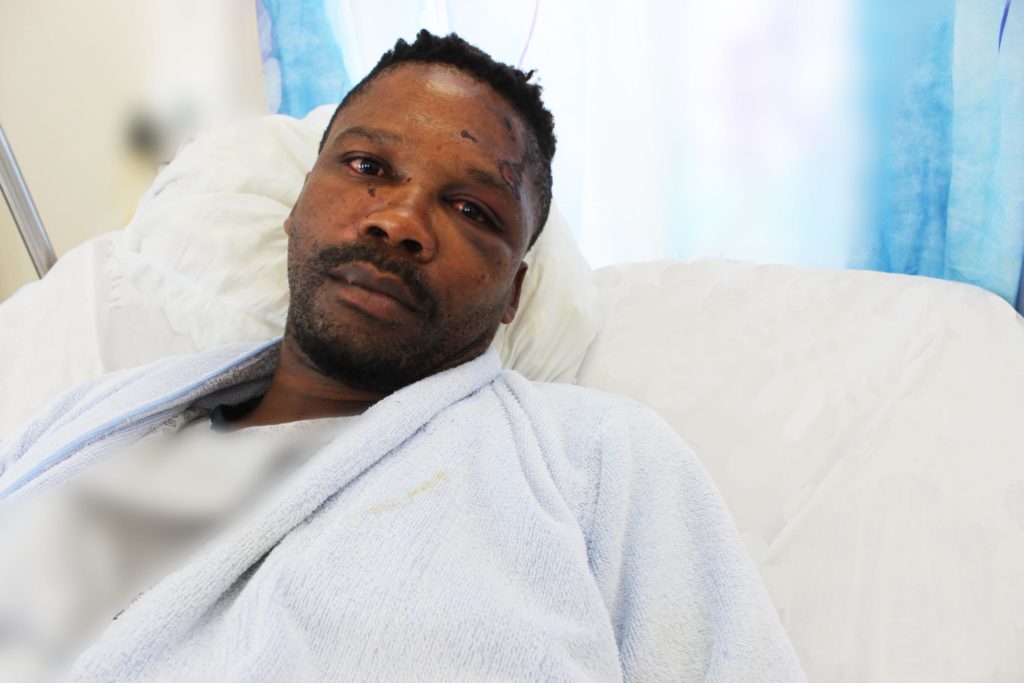 Makhanda performer Sisonke Yafele has vowed to speak out against hate crimes after he was attacked and seriously injured in the early hours of Sunday 3 November. Photo: Sue Maclennan

The police have strongly condemned what has all the signs of a hate attack on well known Makhanda actor Sisonke Yafele last weekend and say they will do everything possible to ensure the perpetrators are brought to book. The South African Police Service is investigating a case of Assault GBH (grievous bodily harm) following a vicious assault on Yafele in Tantyi, Makhanda (Grahamstown), in the early hours of Sunday 3 November.

The police did not identify Yafele in their statement; however, Yafele has explicitly requested that Grocott’s Mail name him. “I can’t keep quiet about this,” Yafele said from where he is recovering. “I want people to know what we experience.”

Yafele says the mob were shouting anti-gay invective as they attacked him and strongly believes homophobic hatred was behind the crime.

The incident has an especially tragic twist because it occurred less than 100 metres from, and just three weeks after Yafele’s close friend and fellow performer Ayanda Nondlwana was stabbed and died. Were it not for an act of extraordinary bravery by a female companion, Yafele might well have died too.

Yafele worked with Nondlwana on a number of award-winning productions at the National Arts Festival and Cape Town Fringe, including Waterline and Falling off the Horn. Along with Nondlwana he is known by thousands of children and their parents, who watched him as the Fox in the home-grown production of The Gruffalo and the world-first isiXhosa version, iGruffalo. Yafele was Nondlwana’s comic-duo partner in the 2017 edition of Makhanda’s mass choral performance celebration, Masicule.

Describing the incident, Yafele said he had been visiting friends in Victoria Street on Saturday 2 November, and had joined a group who went to a tavern in J Street to watch the Springboks win the World Cup final.

Much later, the group returned to the house, only for Yafele to be accosted en route by a man wielding a stick. Hearing the commotion as Yafele tried to resist the blows, and as he and his companions tried to escape from the attacker, neighbours and passers by gathered.

Before long, the story of how Yafele came to be there had been completely twisted. An angry, misinformed mob were soon ready to stand by and urge on a vigilante gang that had convinced them Yafele was the enemy.

A group of around 10 men carried out the attack on Yafele – and their actual problem with Yafele soon became clear.

“I heard them shouting that they want to beat the gayness out of me,” Yafele told Grocott’s Mail. “The way they spoke, they knew who I was. They knew everything about me.”

As they punched and kicked him and attempted to cut off his leg with an axe (he has a deep gash that had to be stitched) they shouted ‘Mofi!’ and ‘Isitabane!’ Both are derogatory terms for people in same-sex relationships.

“We will beat it out of you!” they’d shouted at him.

“They said, ‘You will follow your friend’ (referring to Nondlwana). They said, ‘Today is your last day’. They wanted me dead,” Yafele said.

At one point, the attackers started to drag Yafele inside the property of a complicit resident, so it would appear he had been the aggressor. “One suggested that they drag me into one of the yards so that if anything worse happens from the attack [i.e. if they killed him] it would seem like I attacked them,” Yafele explained.

Immobilised by the blows to his body, bleeding profusely and in excruciating pain from the huge gash on his leg the axe blade had left, Yafele couldn’t move and was powerless to stop them.

It was at that point that, in an act of extraordinary bravery, one of Yafele’s female companions lay on top of him to protect him.

“They beat her too before they eventually stopped,” Yafele said. The woman was covered in bruises and, along with Yafele’s other companions that night, remains severely traumatised.

Worse was to come.

An ambulance did arrive, but Yafele’s attackers intercepted the driver, falsely telling him them that Yafele had been the aggressor.

The paramedics then refused to bring the stretcher to where he lay, Yafele said. “He told me I must walk to the ambulance if I wanted to get to the hospital.”

He couldn’t walk, and so the same companion who had shielded him from the attackers picked him up, covered in blood, and carried him to the ambulance.

“They carried on hitting her on her back, even as she was carrying me,” Yafele said.

For her safety, Grocott’s Mail will not identify the woman.

We understand that at least one person known to Yafele has received threatening messages since the incident.

“I just lay there and prayed,” Yafele said, reliving the incident. “I was praying that I would live. I kept asking, ‘What have I done?’ I was begging for my life. If [my companions]were not there…”

“We don’t feel safe at all,” a friend said. “Actually the whole of Fingo – I feel like they’re targeting us and I don’t understand why. What have we done?”

Yafele says he wants to speak out against homophobic hate crimes in the township.

“It happens a lot and people don’t speak up because they are ashamed, or afraid. Actually, they [the attackers]have made me stronger,” Yafele told Grocott’s Mail.

Spokesperson for the South African Police Service Captain Khaya Tonjeni did not name Yafele. In his official statement, however, he confirmed that a man was assaulted by a group of people in Victoria Road.

“No suspects have been arrested yet, but the police investigation continues,” Tonjeni said.

“The police condemn any acts of hate crime and attack of [any]member of the community [on the basis of]their gender, religion or sexual orientation,” Tonjeni said. “The Constitution of the country guarantees equality of all before the law. We will do everything possible to ensure those behind these violent acts face the full consequences of their actions.”