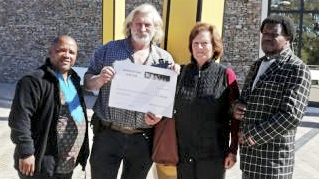 The recent donation to Amazwi, said the Club’s Belinda Tudge, was in recognition of the film club’s use of the state of the art theatre at Amazwi for their 10 annual film showings. “This facility is a wonderful addition to Makhanda’s theatre venues,” Tudge said.

As with previous donations, this money would be put towards the museum’s Education and Public Programmes. The Programmes Manager, Zongezile Matshoba, outlined plans to host a week in early December 2019 designed for school children aged 10-14 years.

“The aim is for the children to visit the exhibitions and then write about their experiences, either in prose or poetry, in English, isiXhosa or Afrikaans (these being the museum’s core languages),” Tudge said. “He also expressed hope that members of the Grahamstown Film Club will be invited to join in this activity to see how the children benefit from this programme, made possible by the club’s donation.”

Previous ArticlePolice vow to act on hate attack
Next Article The Tree of Joy is back!