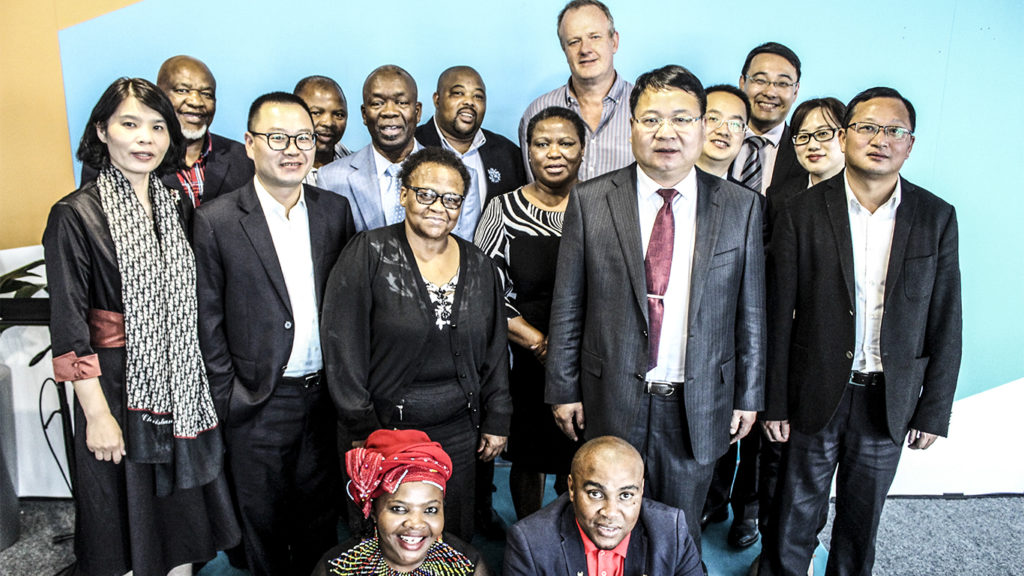 Delegates from Zhejiang Province learned about some of Makana's cultural and economic treasures during a friendship meeting with Makana Municipality at the Monument on 10 September 2019. Photo: Sue Maclennan

On a hot Tuesday afternoon recently, delegates from Yuhang District in China’s Zheijiang Province were introduced to Makhanda during what was billed as a friendship programme. The visit was the extension of a two-day tour to the Eastern Cape by Governor Dr Yuan Jiajun and officials of the Province of Zheijiang.

Makhanda was introduced as primarily a cultural and educational hub and their visit later to the newly opened Observatory Museum was a contrast to an industry focused time with Premier Oscar Mabuyane the previous day.

The underlying message was essentially the same as the one Mabuyane expressed in his welcoming address though: “We need investors to come and locate within our province and manufacture goods for global markets. Our doors are open for the businesses of Zhejiang to come and invest in our province and create the jobs that our people yearn for,” Mabuyane had told Dr Yuan Jiajun at a welcome dinner the night before.

In his address distributed by his media team, Mabuyane described Zhejiang as one of the most economically advanced provinces in China, contributing to 6.3% the country’s economy and ranking 4th in economic strength among the country’s 23 provinces. Highly industrialised, Zhejiang was a leader in critical industries such as textiles, consumer goods, automobiles, shipbuilding, hardware and machinery, photovoltaic power generation, telecommunication, modern agriculture and biomedicine, Mabuyane said. Like the Eastern Cape, Zhejiang is a coastal province.

Here in Makhanda, the Yuhang District of Zheijiang has already made itself known through colourful and skilful performances by its artists at the National Arts Festival.

“Our [districts]share much in common,” the Yuhang Mayor said.

While much smaller (2 228 square kilometres compared to Makana’s 4 375), the Province’s district of Yuhang had 1.6 million residents. It was known as a fashion district, Dr Yuan Jiajun said, and while it was a Unesco World Heritage Site because of it special archaeological significance, it was also a hub of innovation and entrepreneurship.

Makana’s presentation was the kind that councillors could do with hearing – to remind them of the massive value of what’s under their curatorship, alongside the enormous responsibility of the welfare of a mostly poor citizenry.

Along with the National Arts Festival, Mayor Mzukisi Mpahlwa told the Chinese delegation about Fingo Festival, Scifest Africa and the Schools Festival. Makhanda was the seat of the high court, home to Rhodes University and the significant 6SAI Military Base, surrounded by world-class game reserves, sitting on R2 billion worth of kaolin and strategically located midway between the metropolitan areas of Port Elizabeth and East London.

Significant among Makhanda and Makana’s valuable assets, the Mayor told the Chinese, were its excellent private and state schools and a “very vibrant stakeholder society”.

Outgoing CEO Tony Lankester cited Festival figures that include:
* 200 000 visitors to the Festival every year;
* An enormous number of performances (a full six months’ worth, laid back to back);
* A contribution of R377 million a year to the Eastern Cape’s GDP and R94m a year to the city’s;
* Seasonal jobs for 1000 local people.

The only constraint on the growth of the Festival was a shortage of accommodation, Lankester said.

Premier Oscar Mabuyane (or at least his speech-writer!) had to compress a lot into a single presentation during the Zhejiang visit – and for this reason, it provides a useful summary of the Provincial government’s current thinking about our province’s resources. The direct quotes and information here is all derived from the press kit issued on 10 September 2019 after the Eastern Cape/ Zhejiang bilateral meeting.

“They are both excellently managed modern industrial estate that boast world-class infrastructure, quality premises and efficiently operated utilities and amenities for streamlined business operations,” Mabuyane said. “All the sites in our IDZs are fully serviced with access to all utilities and ICT infrastructure and all are within close proximity to key transport networks such as airports and ports. This is one of the reasons that has led a World Bank financed a research study to select Coega as one of the seven examples of success out of thousands of SEZs around the world.”

Chinese companies BAIC and FAW were housed at the Coega SEZ, which has a Deep Water Port, Mabuyane told the delegation. Chinese manufacturers Powerway Engineering and Powerway Photo Voltaic had confirmed their investments in the SEZs.

“Honourable Governor Jiajun, the agricultural sector remains largely under-developed in our province with more than 300 000 hectares of arable land and livestock available for primary agriculture and agro-processing production,” Mabuyane said in his address to the delegation.

This was an area for the provinces to cooperate – “particularly in areas of citrus, grain, meat production and horticulture products”.

The Premier also said, “There is also a mine field of opportunities in a new sector that we are endowed [with], which is cannabis production for medicinal purposes. Our Province is not matched in the entire country with the high quality of cannabis plants that grow naturally in our land.”

Mabuyane said the provincial government was in the process of finalising a licencing regime.

“We need investors who would partner with our cannabis farmers to develop a thriving cannabis processing industry.”

He cautioned, though, that investors who wanted to come to the Eastern Cape must follow government protocols.

“The State is the sole Consititutional authority of any nation, thus the first point of call for any investors is the State,” he said.

“We believe the expertise of your province in areas of ship building and bunkering will assist us as we venture into the Oceans Economy Sector.”

“At the centre of all our cooperation agreements should be a shared common commitment to develop SMEs. For us, SMMEs should be the driving force behind the growth of our economy. We want to partner with you on this matter so that our SMMEs can learn from the culture of entrepreneurship that China has built over centuries. Our government is taking deliberate attempts to invest on SMMEs and by consciously encouraging investors to beneficiate local entrepreneurs in an attempt to create an inclusive economy. We are pinning our hopes on the cooperation of our provinces to make some headways on this matter. Our Economic Development Corporation agency regularly takes SMMEs to the China International Small Medium Enterprise Fair to look for trading opportunities with our Chinese counterparts.”

“We are also looking for tangible projects in the area of Tourism. We know that a booming economy and expanding middle class with a newly disposable income has made China the number one most sought after outbound tourism market in the world. This has been confirmed by a recent study conducted by global media commerce company, Travelzoo, which has revealed that Africa is the new top destination for Chinese tourists in 2018. Our Province is rich in safari, cultural and historic offerings, presenting major opportunities for us to share with the people of China and the people of Zhejiang Province in particular.”