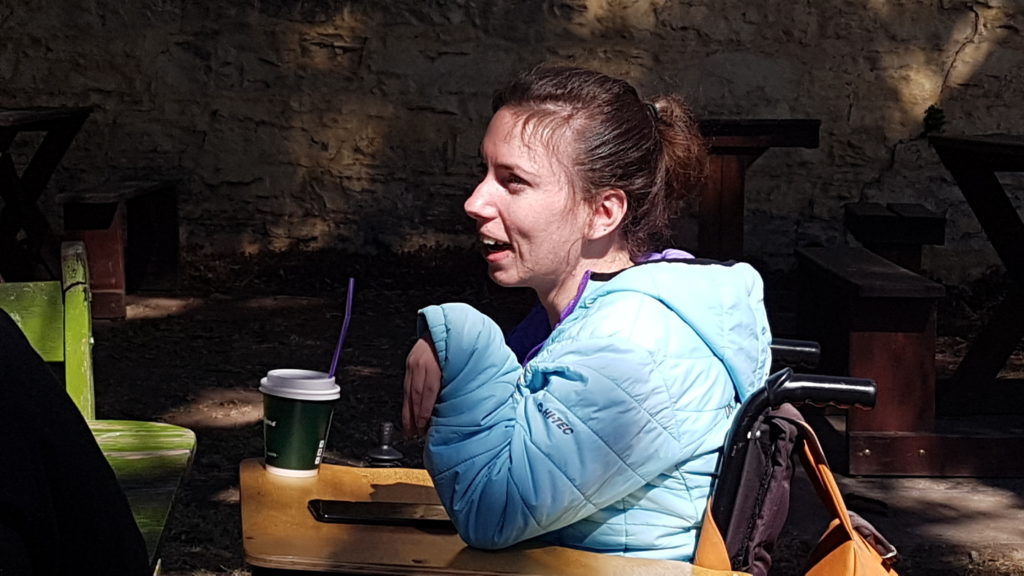 By ZAMAMIYA MAJOLA AND GEMMA RITCHIE

On Tuesday, September 3 2015, Chaeli became the first quadriplegic woman to summit the tallest peak on the African continent.

She remembered that in the morning they began the hike, her teammates were excited at the prospect of climbing the mountain.

“I was like, but we have been climbing a mountain the whole time,” she told the audience at Rhodes University’s on Monday night, 2 September, in Makhanda (Grahamstown).

Mycroft was the keynote speaker opening the university’s ‘Mainstreaming disability’ week. For Mycroft, one of the key issues in the discussion on disability is to have the agency to question and understand mainstream issues in relation to all bodies, such as access – whether it is into buildings or educational institutes or sport.

Born August 30, 1994 in Cape Town, Mycroft is working towards her PhD in public law at the University of Cape Town after completing both her Masters in human rights law and her undergrad in politics and social development.

Her current successes are the result of persistence in her push for inclusive education.

“My educational journey was a rollercoaster tornado,” said Mycroft. “There were times it was just ridiculous.

“My preschool was inclusive because I was there,” she told Rhodes students.

Mycroft was diagnosed with cerebral palsy at 11 months. She owns her disability, she says, but she won’t let it limit her. She lives by the principle of relentless optimism.

A fan of actor and playwright Neil Marcus, she said he found a way to explain what it was like to live with a disability: “Disability is not a ‘brave struggle’ or ‘courage in the face of adversity. Disability is an art. It is an ingenious way to live.”

For Mycroft, this meant that living with a disability required talent. “Let’s be real, we don’t live in a disabled world,” she said.

Fifteen percent of the world’s population – about one billion people – lives with a disability, according to data from the World Bank which makes the conversation about inclusion and the “small things” an important topic for people to discuss.

“There is inherent anxiety as a disabled person – there is always something that is not working,” said Mycroft, but she admitted, there is no one solution to a problem.

This is where Mycroft’s activism comes into play. She has worked with establishments to effect change for differently-abled students and raise awareness about the issues she and many people with disabilities face.

The focus of her activism is equity where “we recognise out different needs and abilities”.

With equity comes the reality that all people are equal before the law. As a PhD law student, Mycroft said she would have been impressed if she had been arrested during a protest – it would have meant that the police officer had managed to get her wheelchair into his vehicle.

She was never arrested, however, and much of her protest has involved discussions with stakeholders.

“Being disabled coerces you into different forms of activism,” she said. With her activism, she has found that it is more important to move beyond the point of being allies – where you have people who support your actions – to accomplices.

“You have to have people involved in making change,” explained Mycroft.

Mycroft has been an ability activist since she was nine and her friends and family formed the Chaeli Campaign to raise funds for an electric wheelchair for Mycroft.

The campaign succeeded and for the last 15 years has supported 54 000 children living with disabilities through inclusive education, advocacy, therapy and support with assisted devices. The campaign aims to realise the potential of differently-abled children and operates throughout the country with chapters in Cape Town, Johannesburg and Bloemfontein.

In 2012, Mycroft was awarded the Medal for Social Activism from the Nobel Peace Laureates. After competing in four Comrades Marathons, the Cape Town Cycle Tour, and climbing Mount Kilimanjaro, Mycroft is looking forward to her next challenge: the Iron Man.

Mycroft plans to tackle this next adventure with her relentless optimism and assistance to the point of independence from her friends and family.

“Independence doesn’t mean you have to do things by yourself. Independence together is better.”, she said.