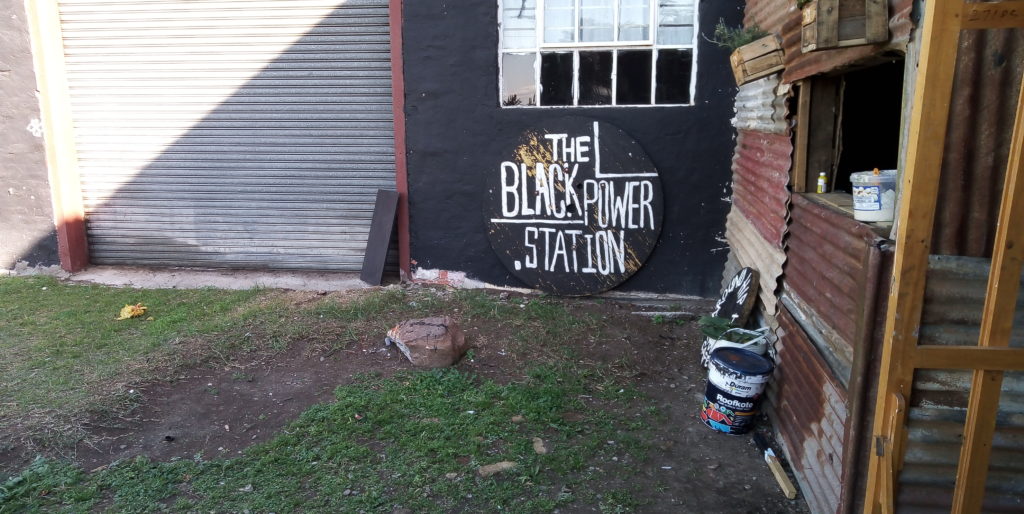 The Black Power Station is a reflection of what the Fingo Festival seeks to highlight of the local arts scene, including stages for performers, artists, reading, dancing and more talents in a controlled space. It is an on-going festival, rather than a once-off event.

It started out as an old power station that has not been used for long time. Working together with artists, and as a visual thinker and an artist himself, Xolile Madinda, who is also a curator of the Fingo Festival, brainstormed to use the space to bring in all elements of art into a small space.

While reading might be seen from a different angle, it has been adapted into art itself. A corner called The Book Corner, which consists of donated books, is designed for visitors to use and experience. Madinda said, “the main purpose of having the books is to keep the audience inside. Maybe [while they are there]they hear that there will be a show by “Msaki” (Asanda Mvana) and other vocalists, so to keep them inside is to sit in the corner and read for the moment [while they wait for the next show].” Some of the books were used as part of payment at the door to watch a show.

All year round the space is open for artist to come and do whatever they prefer to do – for painters there are free canvases to practice painting on and they can even finish the unfinished artworks of others, adding their own taste to the paintings. The event has developed in a very impressive way, and the organisers have even developed a relationship with the University of Virginia in America through Madinda’s colleague, A.D. Carson, bringing 15 students from the University to the Fingo Festival and the Black Power Station. Carson is a professor teaching Hip Hop at the University of Virginia, who after finishing his PhD decided to rap it and produced it as an album.

Madinda has also been working with Carson in teaching and empowering mostly young black artists to recommend Black Power Station as a destination for art and development.

“Working together with Bliss (Andiswa Rabeshu), a graduate artist from Lovedale College in Alice, we’re working on motivating artist to believe that they can bring a change to the community through art and using the Black Power Station can improve their talents,” said Madinda.

As a rapper, Madinda has organised an ongoing show called “Around Hip Hop Live Café” which seeks to give hip hop rappers a chance to rap and DJ. “We are also planning and fundraising to have an open mic rap battle which is going to be very interesting called ‘Know Your History Hip Hop Battle’; that will be a battle where two rappers will act as two different controversial or former political leader and battle according to what is important that they know and was special about the two activists,” said Madinda.