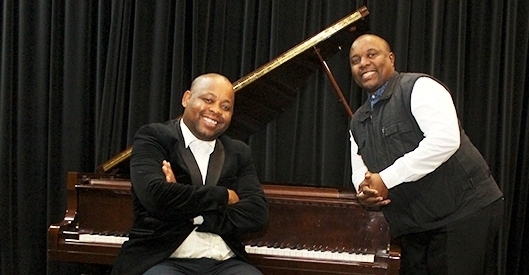 Two local heroes, Sisa Nomana and Sibusiso Mkhize, music lovers who met after going to the same church together for a number of years, started singing together and formed a big reputation for themselves in a short space of time. For the third time, they will be performing their song “Love Changes Everything” and many more at the National Arts Festival in 2019. The two singers met and formed the group the Trinity Tenors after Nomana’s performance at Trinity Church in 2016. Nomana (right), is a police officer and a former solo performer and Mkhize (left), is a pianist and a Music Teacher at Victoria Girls High School who has taught a number of students music.

During the performance in 2016, Mkhize played piano for Nomana whilst he was singing. They first sang together at the performance in 2016, after a member of the audience, who knew Mkhize could sing very well, requested that the two performers sing together. At the same time, the chairperson of the church requested that the two form a duet group and he named them the Trinity Tenors. Thereafter, they were requested to have a show together in 2017, on Valentines Day.

As the two have been inspired by some of the best European tenors such as Parvarotti and the Three Tenors of Italy, they have been singing more of western music. This time around, however, there is going to be a huge change as they will be accompanied by Bonelela Mavuso, a pianist that understands African music well. The idea is to add a African taste to the classic music they have been performing thus far, making their performance even more unique.

Mkhize said, “Grahamstown is a city of art, so we’ve invited a number of youth singers to come and sing along with us because the idea is to have Trinity Tenors feauturing a large number of upcoming singers.”

Apart from performing for a paying audience, the two have been going around the city and singing in throughout Makhanda for nothing, with a purpose of motivating the talented, demotivated youth of the town. “Most of the kids in the township are young, God gifted and highly talented youth, but they are not motivated,” said Mkhize.

While the two singers want to share their performance with the community, Nomana wants those that attend their performance at NAF to be in for a surprise. “Rather not spill the beans,” said Nomana, “it’s better for people to come and see for themselves what we have been cooking for them.”.

Enjoy listening to Nomana and Mkhize performing romantic music at Trinity Church in Hill Street on 1, 2 and 4 July, 2019.