GBS donates over half a million to education in Makhanda 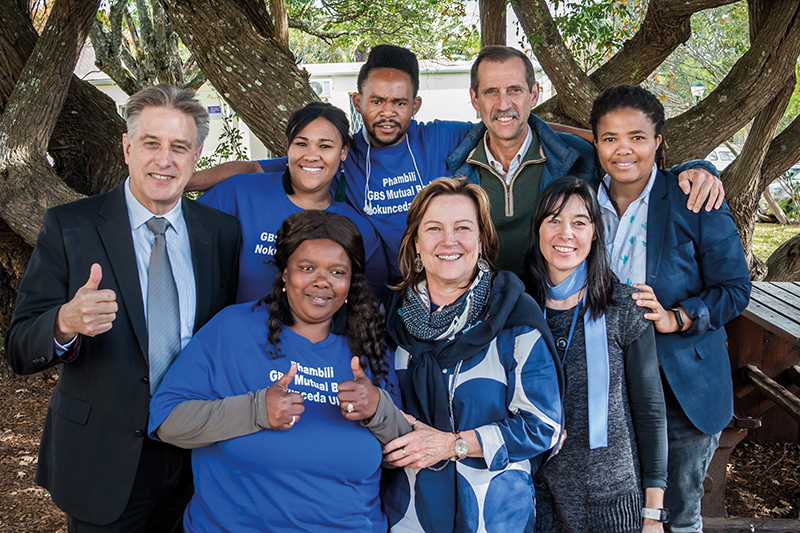 GBS Mutual Bank has donated R600 000 towards improvement of public education in Makhanda this year.

The funds have been allocated to boosting Rhodes University’s Nine Tenths Mentoring Programme, towards bursaries for eight students who fall in the “missing middle” category, and to the installation of water tanks at 20 of Rhodes University’s partner pre-schools.

“GBS strongly believes that every child in Makhanda (Grahamstown) should be afforded the opportunity to have a quality education, and that access to a Rhodes University education can positively affect personal and family circumstances,” said Diana Hornby, Director of Rhodes University’s Community Engagement Division. “Which is very much in line with our overall VC’s Education Initiative.”

The bank’s R200 000 investment in the Nine Tenths Mentoring Programme will help ensure deserving disadvantaged matriculants get direct access to Rhodes University and other universities through mentoring.

According to Hornby, Makhanda’s matric pass rate increased from 62% in 2015 to 78% in 2018. “Our Nine Tenths Programme has had a direct influence in this 26% improvement,” she stated.

GBS Managing Director Anton Vorster said, “It is no small thing that we are a mutual bank and mutuality means something to us. It means collectively, we have an interest and it is no secret that we have an interest in education. We would like these funds to go to students who reside and were educated in Makhanda.”

On 19 June, the 20 partner pre-schools where the donated water tanks were installed, attended a workshop at Rhodes University, where they were taught how to use a testing kit to ensure water is clean and safe to drink.

“To invest such a large sum into education is incredible for a small bank. GBS’ commitment to education and to the upliftment of Makhanda is a true inspiration,” said Hornby.

Rhodes University is not the only education-based beneficiary of GBS Mutual Bank. Over the years, it has supported other learning initiatives, including GADRA Education, a Makhanda-based NGO.

The GBS Mutual Bank has donated R600 000 towards improvement of public education in Makhanda. GBS is one of the smallest banks in South Africa and it is positively contributing towards the development of one of the towns it is situated in. Although this is a huge amount for a small bank, GBS is committed to social responsibility and contributing to positively shaping society.

The R600 000 that GBS contributed is divided into three grants. The first grant of R200 000 went to the 9/10ths mentoring programme, another R200 000 went to the Amanzi Yimpilo water tanks project and the last R200 000 into bursaries for local Rhodes University students who are in the “Missing Middle”.

What is 9/10ths mentoring programme?
Nine Tenths is a mentoring programme geared towards equipping matric students in selected local schools to cope with their final year of school and to pass to their full potential. Pupils are given one- on-one attention from a Rhodes University student through nine guided and structured contact sessions.

Last year the programme saw a 100% improvement in mentees’ marks and and a resounding increase on strong passes when compared to 2017 matric results. This is due to the very outstanding partnership between Rhodes University, GADRA Education, Ntsika Secondary School, Nombulelo Secondary School and Mary Waters High School.

The break-down of the three schools involved in the Nine Tenths Programme is as follows:
* In Mary Waters High School, 81% of the learners got strong passes. A strong pass is either a bachelor or a diploma pass. 19 learners got a bachelor pass while 8 received a diploma pass.
* Ntsika Secondary School’s strong passes went up from 46 in 2017 to 49 at the end of 2018. Bachelor passes also went up from 22 to 36 in 2018 and a total of 23 diploma passes.
* At Nombulelo Secondary School, strong passes went from 27 in 2017 to 46 in 2018. More
incredibly is the drastic drop in weak passes. In 2017 there were 29 (23 of whom were
modularised or failed!). In 2018 only 8 got a weak pass and 0 failed or got modularised.

Where are the mentees in 2019?
* 62 involved in some trajectory that we are directly involved with. Last year this was 52. 32
are at Rhodes University (RU).
* 24 are doing bridging courses (2 subjects at GADRA Matric School to improve their Matric
and doing an introductory on one of the following courses: Psychology, Science, Commerce)
* 6 are full time learners at GADRA Matric School

In 2019 the programme has since increased in the number or mentees and mentors. In 2018 there were 90 mentors and 168 mentees. This year there are 125 mentors and 210 mentees. GBS has contributed R200 000 to ensure that this programme continues to have a positive impact in Makhanda.

What is Amanzi Yimpilo?
Amanzi Yimpilo is a water tanks project conceptualised by Pam Sandi, chairperson of the Makhanda Early Childhood Development Forum. Sandi’s idea for the project was elicited by the ongoing water crisis in Makhanda. The main concern is overall health standards for the children at preschools in Makhanda townships. She approached different stakeholders in the town and GBS answered her call.

GBS contributed R200 000 towards purchasing rainwater tanks and installing guttering to 20 local preschools to ensure that there is drinkable fresh water. Two water tanks have been installed in each preschool. The schools can also use the water to wash hands, flush toilets and for cooking at times where there are water cuts, to ensure the learners and teachers at the schools stay healthy.

The rainwater tanks will also be beneficial to communities in close proximity to the schools. Parents whose children attend the schools will be allowed to collect water for use at their homes.

Bursaries for the “Missing Middle”

GBS contributed bursaries to the value of R200 000 to eight academically deserving students from Rhodes University. The bursaries are to support Makhanda students who fall outside of the National Student Financial Aid Scheme (NSFAS) funding threshold – a group who often struggle to pay fees, referred to as “the missing middle”.

GBS has stipulated that the bursaries should be directed to specifically to students from Makhanda.