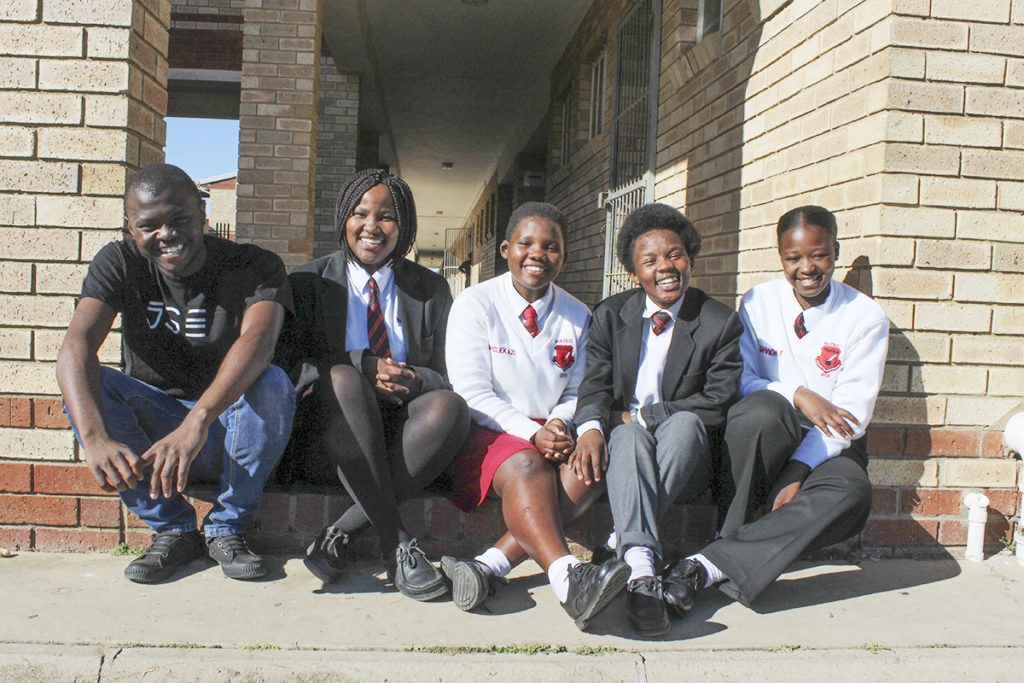 “Amazing” is how the four members of Team Optimistic Eagles felt after they walked away with the national prize for the April-May cycle at this year’s Johannesburg Stock Exchange (JSE) Investment Challenge, a first for this region.

Ntsika won the monthly prize in the income portfolio category against more than 2 051 teams nationally working towards the coveted ultimate win.

The competition takes the form of a simulator in which each team of four learners or students from the same school or institution are given an imaginary sum of R1 million. With this imaginary amount, the teams trade on the stock market and invest in actual JSE listed shares over a six-month period.

The teams compete with other teams from schools, and institutions, countrywide. There are plenty of prizes to be won monthly. There are also annual prizes for top performing teams, schools, teachers and mentors. The team that wins the JSE Investment Challenge receives cash deposits into an investment account for each of the team members and the top performing university team is awarded a trip to an international stock exchange.

The challenge, in its 46th year, draws in school learners and university students with an interest in investment and stock markets. Over the decades the initiative has come to be highly regarded as an instrument that introduces the country’s youth to investing and the stock exchange.

Here in Makhanda, senior lecturer in the Accounting department at Rhodes University, Leon Coopasamy has signed up nine local schools to the programme and appointed university students, trained by a JSE expert, as mentors.

Mentors visit the school teams twice a month and receive a small stipend. They submit monthly reports to Coopasamy,who forwards them to the JSE.

Mary Waters, Graeme and Kingswood were the first to sign up in 2017, with Ntsika and Nombulelo following in 2018. Now all the public schools in Makhanda are participating, as well as Kingswood.

“Every single government school in the area is taking part this year, Coopasamy said. “I reached out personally to them and built the relationships over these past few years.”

Ntsika, like most public schools in the area, was short on resources, said Coopasamy, meaning participants faced extra hurdles in this challenge.

Second-year Rhodes University B.Comm student Bongani Mtsweni made it possible for the Ntsika pupils to participate, despite having no computers or data.

“They don’t have data to check on their portfolio and how it changes, so when I come, I show them the graphs – how their shares have changed since their last session,” Mtsweni told Grocott’s Mail. “If I see something will make a loss before the next session, I whatsapp a group member so they can discuss among themselves what they want to do about it.

“Sometimes I buy data, bring my laptop and hotspot it with my phone so I can show them what’s going on,” Mtsweni told Grocott’s Mail.

“The the first time, I was explaining the rules. Because they can’t get continuous updated company information, I showed them how to read the shares graphs. They learnt to read and interpret them.”

Teams have to select the “risk” portfolio they want to sign up for. The options are Income (low-risk), Equity Growth (moderate risk) and Speculator (high risk). The last option is limited to schools with internet access.

These different portfolios allow participants to select their appropriate wealth management strategies, testing their investment skills against peers who follow a similar strategy.

“They achieved their R5000 inflation target by buying shares at their lowest price and selling at their highest,” Mtsweni explained. “Once you’ve reached your inflation target, the aim is to gain income. The highest income will win the monthly competition – and that’s what the Eagles did.”

The secret of their success?

Apart from having a dedicated and enthusiastic mentor, Ntsika’s Optimistic Eagles were bold.

“They took the risk of buying shares with a lot of money. They saw potential in one of the companies whose share price fell in December. They realised it was highly possible it would go up. Even though the shares were expensive (around R3000) they realised that with even only a small precentage increase, they would beat inflation.

Another team from Ntsika had been number 2 until the last minute.

“But the game changes in a day,” Mtsweni said.

The next winners will have an even tougher job, with the inflation target set at R30 000 for May.

“We are very excited about this win by the Ntsika team. Wins of this nature help children realise that life and opportunities are not dependent on your circumstances. Now they can look at the competition and see that ‘I can do it’,” said Coopasamy.

The Ntsika teams competed against some of the top private schools school with world class facilities.

“The school’s support of this programme is amazing. The teachers and staff are instrumental in ensuring attendance, participation and consistency, which I think positions the pupils well for achievements such as these,” he said.

“Their mentor, Bongani Mtsweni, has done an amazing job. The pupils at this school had difficulty participating in the trade due to a lack of resources.

“Bongani, who is on NSFAS (National Student Financial Aid Scheme), took money out of his own pocket and bought data so the pupils could hotspot from his device and get the full experience of this challenge. This is his first year as a mentor, his innovation and compassion for these pupils truly added to this month’s win,” said Coopasamy.

Principal Madeleine Schoeman said, “Leon Coopasamy is superb organiser. We have a good team of tutors and an enthusiastic teacher. The learners have been enriched in so many ways”

Corporate Social Investment (CSI) Officer at the JSE, Ralph Speirs, said “Makhanda has been participating in the challenge since 2017. This is their first major win and we are very proud of them.”

The winners for the monthly prizes receive R500 per team member, R500 per teacher and a further R500 for their school. The top five teams in the country will be flown to the JSE in October where there will be a prize giving.

Previous ArticlePresident’s Award volunteers change spaces and places
Next Article What do you know about the environment?