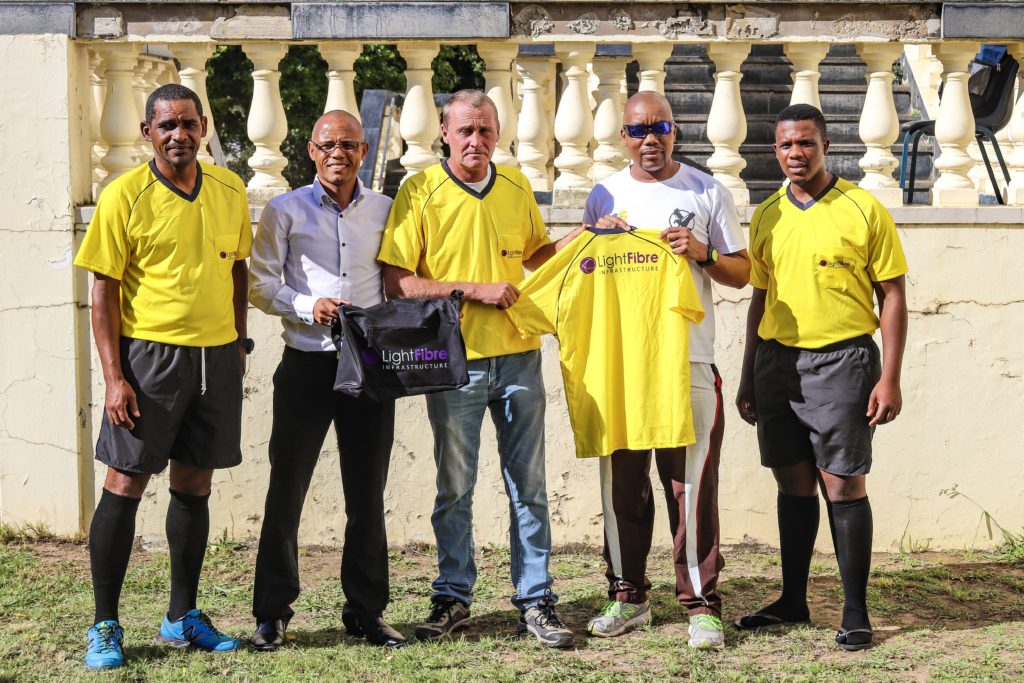 On Tuesday 30 April, the South Eastern District Rugby Union (SEDRU) Referees Society were given a boost in the form of the sponsorship of new kit for their referees and members, sponsored by Light Fibre Infrastructure. The society, which was founded in February 2017, was in desperate need of kit, as previously, their referees had to officiate in whatever T-shirts and pants they had available.

Barry September, Chairperson of the SEDRU Referees Society, expressed the importance of the referees in the town, and how previously the referees that form part of the society were not treated well on the field due to not having official attire. “You can’t play rugby without referees. A referee is one of the most integral part of the game. I mean if you go onto the field of play and you’re wearing a t-shirt and shorts, no rugby team or club will respect you,” said September.

“In December last year we had an off-season break, and I was sitting here in my office and I was thinking to myself ‘what can I do?’ so I said let me do a little bit of research and see where can I get sponsors,” said September. “Light Fibre were one of the companies I noticed were working in town, and within a couple of days I got an email back which said they will look into our request. We are fully thankful for the efforts they put in to assist the society.”

Light Fibre ultimately handed over 30 bags, t-shirts and socks to SEDRU Referees Society so that they can continue to build their base of referees and provide quality officiating on the field.

Raymond Jooste, Project manager at Light Fibre, was more than happy to help the society in their time of need, as it forms part of the company’s mission statement and vision. “I’ve been with Light Fibre since 2012, and I have seen us grow as a company as well,” said Jooste. “It has become so much more important, as a social responsibility for us, to get involved in all the struggling people, the SMME’s. We’ve helped a soccer club in PE  with full kit as well. In Venda we’ve built a whole computer centre for schools. For my director, Grant Naudé, that is his passion and that is his goal. If it is within reason, we will always help everyone.”

“One of my main goals as the chairperson of the society was obviously to get the kit, but also to develop referees,” said September. “This is a starting point. Saying to the kids, if you don’t play first team rugby, here is something else you can try.”

September added that the society is currently looking on expanding their female referee group, which is currently sitting at one inactive referee. “We are also looking for ladies to become referees. We have one already but she is not active yet,” said September. “We are lucky to have a South African referees coach (Sindile Ngcese), so this should encourage all referees to also aim high, because Sindile was a provincial referee and was involved in the Currie Cup for years.”

The new kits will be in action every Wednesday and Saturday throughout Makhanda (Grahamstown), not only for club rugby matches, but for schools matches as well.