The Impact of Language on Education 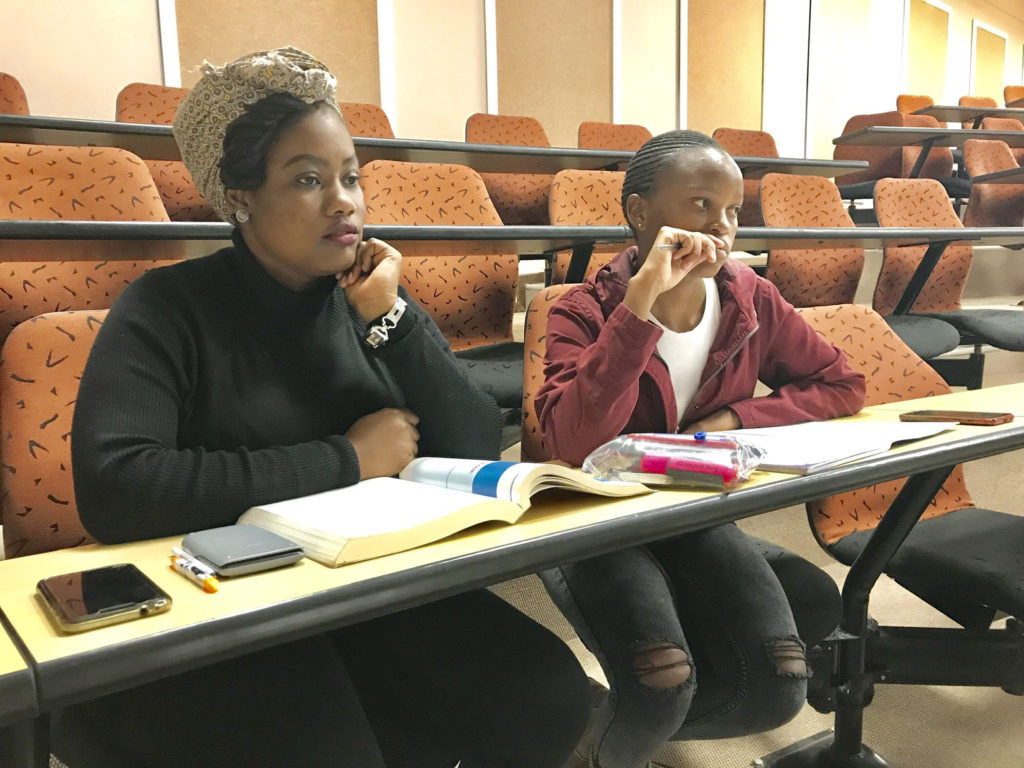 Masechaba and Kgaugelo in a lecture theatre. Photo: Aaliyah Aboobaker

South Africa’s education system is currently in a crisis, proven by our dismal ranking in the Progress in International Reading Literacy Study.

Pupils in primary school are not only hindered by the unfair education system, but also by language barriers that prevent them from performing at their optimum potential.

According to the 2011 Census, approximately 88% of the population speaks native South African languages, and children are accordingly sent to schools that use their home languages as the medium of instruction from grades 1-3. Many pupils then remain in schools that teach in their mother tongue right up to the matric level.

Masechaba Makola, a student at Rhodes University, studied at a Sepedi-medium school in Limpopo throughout her schooling career.

“All my subjects were taught in Sepedi, even English,” she said. In her primary school, everybody thought that Masechaba knew English, as she was a diligent pupil and was constantly reading newspapers and magazines.

“That really helped me,” she noted, “because even when the school had functions, I would be the MC. In primary school and high school, it did not feel like my English was not good enough.”

Coming to a tertiary educational institute made Masechaba aware that studying in Sepedi throughout school had put her at a disadvantage. “With Rhodes University, everything is in English, even communicating with your friends. Coming from an environment where you only had to speak English for presentations at school, speaking the language every single day is extremely difficult,” she said. “It does not only affect your studies; it affects your self-esteem as well. You feel like your English is not polished, so you tend to hide yourself and not say things. Even in class, you don’t answer questions,” she added.

Kgaugelo Mamogale, who is also a student at Rhodes University, attended seven schools – all of which taught in Tswana. Like Masechaba, she was a diligent pupil and enjoyed learning new English words. However, when she arrived at university, she had a very different experience. “In my class, a person would ask a question, but before I could even understand the question that they asked, the lecturer had already answered it. I’ve never asked a question in a lecture, and not because I don’t have a question,” Kgaugelo explained. The fear of speaking incorrectly led her to avoid speaking in lectures. “I felt like it took longer for me to do things compared to other people,” she added.

The Political and International Studies Department at Rhodes University has tried to remedy this situation by accepting academic pieces in South African mother-tongue languages. Koaile Monaheng, the Teaching Assistant at the department, said that this policy was always in place, but it was just not prioritised. “We were inspired when a professor submitted an entire PhD in isiXhosa,” he said.

“When South Africans speak, they flow between languages, which Dr Siphokazi Magadla – a Senior Lecturer at the university – pointed out. You don’t realise how much we go through different languages when speaking, to try to explain a point. We wanted students to express themselves more and have a deeper understanding of their work.”

This policy was well received by the students, and four students decided to write their examinations in isiXhosa.

The schools in South Africa that do not engage with English as a medium of instruction see their learners facing a disadvantage after matriculation. Furthermore, the emotional strain that is placed on these students is extremely unfair. If more tertiary education institutions would accommodate for all official South African languages, students such as Masechaba and Kgaugelo would be better able to utilise the university space for the benefit.