Ramaphosa, with praise and power 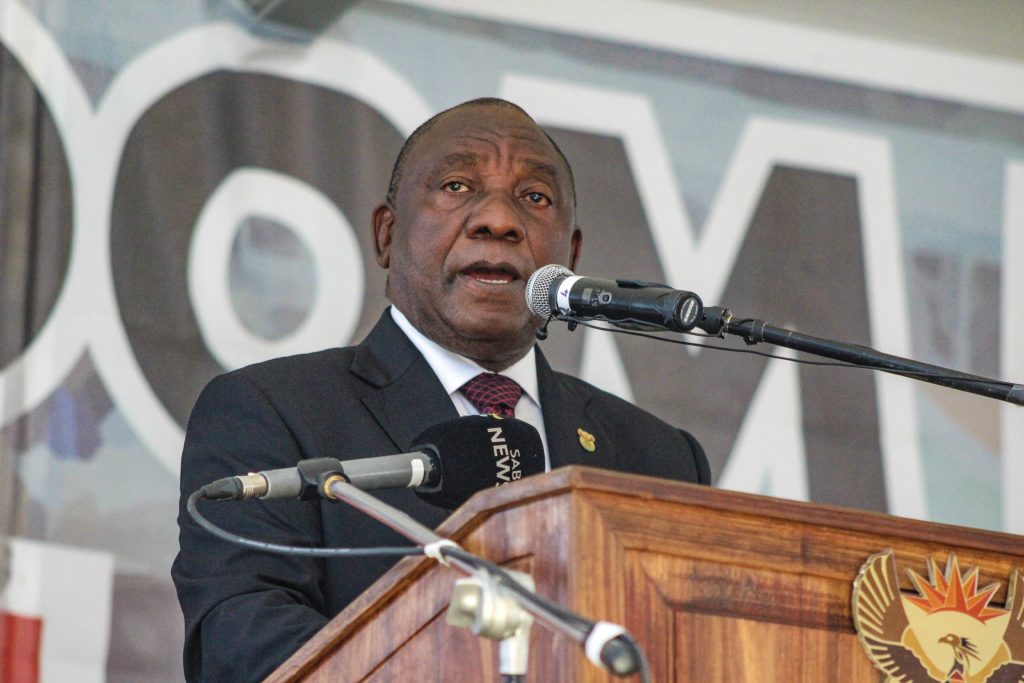 His Excellency, The President of the Republic of South Africa, Cyril Ramaphosa addresses the crowd at Miki Yili for the 2019 Freedom Day Celebrations. Photo: Stephen Kisbey-Green

Always conscious of where he was celebrating the occasion, the President made significant references to local heroes even if they did not belong to his political party.

He recalled that as the country celebrates a quarter of a century of democracy, it is simultaneously commemorating the Battle of Egazini fought in Grahamstown exactly 200 years ago. It was at that place where iqhawe Makhanda ka Nxele led a great rebellion against the British occupation.

Earlier, Arts and Culture Minister Nathi Mthethwa, who formally invited the President to address the nation, had described the battle as an important change in the heritage landscape against colonialism. He also described the man who Grahamstown was named after, Colonel Graham, as a ‘vicious, brutal, murderer’, and that is why “we are not going to tolerate offensive names in our public spaces”.

Ramaphosa strengthened the association with the Eastern Cape evoking the humiliation of  iqhawekazi Sarah Baartman, ‘a daughter of this land’, who was taken to Europe to satisfy the curiosity and cruelty of others and now lies buried in the town of Hankey, 200km from Makhanda.

He said we are celebrating freedom inherited from Mangaliso Robert Sobukwe, a son of the province, who founded the Pan Africanist Congress and fought, based on principles of African nationalism, for self-determination for the country’s majority.

The South African President also attributed this freedom to iqhawe Bantu Steve Biko from King William’s Town, whose conceptualisation of black consciousness has continued to influence intellectual thought long after his passing.

Ramaphosa also had praise for heroes of the present, paying tribute to “the determined students here in Makhanda who led a movement to open our universities to all South Africans, especially the poor”. He noted that it was in this town that students led protests against the scourge of gender-based violence.

He hailed the political successes of 25 years of democracy and called out the socio-economic challenges that have not been adequately addressed.

Ramaphosa reminded the audience that we celebrate our freedom on this day because it was on April 27, 1994 that all South Africans were allowed to vote for the first time and thus gain their political freedom.

“Despite the passage of time, it is a day we remember vividly – the exhilaration of seeing nearly 20 million South Africans of all races waiting patiently at polling stations around the country to cast their ballots”.

He recalled his own personal experience on that day when he voted at Kloof Gold mine in Westonaria among the mine workers, “who built the country’s wealth, but had never before been accorded the most basic right of citizenship”.

He commended his fellow citizens for achieving the seemingly impossible task of putting an end to apartheid, and achieving this goal without sinking into “the abyss of vengeance and retribution”.

Ramaphosa noted that although there have been remarkable achievements in the first 25 years of democracy there is still much to do because our country is still deeply unequal.

He recalled the words of the country’s first democratically elected president, Nelson Mandela, who observed that it was good to admire a view once a hill had been climbed, but after a brief pause, the journey continues because there are still many hills to climb.

The hills still to climb are largely of a socio-economic nature because although we have achieved 25 years of democracy, “we cannot be a nation of free people when so many people still live in poverty”.

The South African President acknowledged that many citizens live without enough food, without proper shelter, without access to quality health care and without a means to earn a living.

He then made the message relevant to the local audience saying that “we cannot be a nation of free people when residents of places like Makhanda have to go for so long without a reliable source of water”.