Road to a Rhodes degree 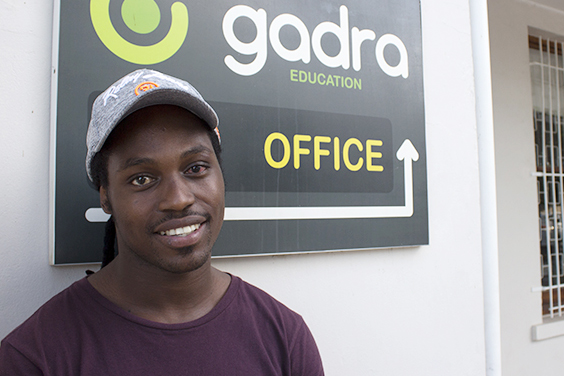 Gadra Matric School alumnus Zolani Bethela will be awarded a BSoc Sci (Honours) degree this weekend. He is proud of his working origins as a petrol attendant. Photo: Sue Maclennan

Gadra Matric School graduate Zolani Bethela is proud that his first job as a petrol attendant supported him on his path to graduating at Rhodes University this weekend. Grocott’s Mail reports.

Rhodes University Chancellor Lex Mpati was among Zolani Bethela’s greatest inspirations as he made the decision to leave the forecourt of a Makhanda (Grahamstown) service station and take the first step towards the university degree he is receiving this week.

One of 31 Gadra Matric School alumni who are graduating from Rhodes University this week, Bethela will walk on to the Monument stage on Saturday 13 April to receive an Honours degree in Industrial Sociology.

Born and raised in Makhanda (Grahamstown), Bethela completed his matric at Nombulelo High School in 2010. He received a D average and went straight into his first job. Like the respected Judge, he worked as a petrol pump attendant.

“I was 20 then, and I’d read Judge Mpati’s story,” Bethela told Grocott’s Mail. Justice Mpati, too, grew up in Makhanda and, having earned a living on a service station forecourt, started his tertiary studies at the age of 31. Mpati became President of the Supreme Court of Appeal.

“I was 20 years old when I read his story and I thought if he could start his legal career at the age of 31, and be so successful, I wasn’t too old. “

Zolani’s mom, Mvulakazi Bethela, worked as a cashier at Checkers and he’d always hoped for a better paying job, “so I could make a better life for me and my family”.

The turning point came one rainy day on the forecourt when a customer arrived and asked his colleague to pump up his car’s tyres.

“She was pregnant, and it was raining, so I took her place and went to assist the customer,” Zolani said.

Unconcerned that Zolani was within earshot, the customer said to his children, indicating towards his colleague, “You see – if don’t go to school, this is how you end up.”

Zolani was proud of the work he did and still is. He’s proud that he was able to earn a living during his time as a petrol attendant, and believes that those two working years taught him a positive work ethic.

But he needed to prove a point to himself.

In January 2013, Zolani enrolled at Gadra Matric School to re-do his matric – and achieved a Bachelor pass. In February 2014, he was walking into Rhodes University’s Eden Grove building to register for his first year of a Bachelor of Social Science degree.

“I was really scared – I thought I wouldn’t survive. I guess God decided for me to go there.”

On 13 April 2019, he will be awarded a Bachelor in Social Science (Honours) in Industrial Sociology.

Right now, he plans to get a job and in a year or two, he’d like to do his MBA. And then… maybe when he’s 31… he’d like to do a Law degree, like his role model Lex Mpati. “I do have that interest.”