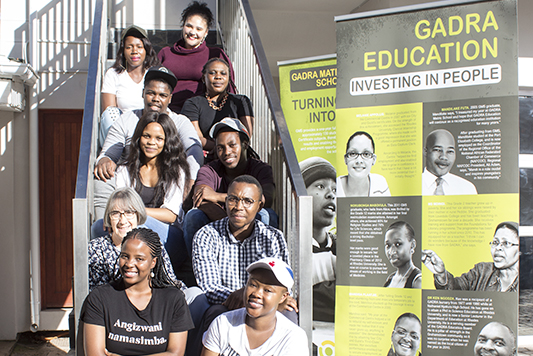 The 2019 Rhodes University graduations this week see the triumph of 31 Gadra Matric School alumni who are attaining degrees or post-graduate qualifications.

“These young people would have been at a dead-end after Grade 12 without the Gadra Matric School,” said the school’s manager, Ashley Westaway. “They are commended both for having used their year at GMS to get their tertiary study aspirations back on track and also having prepared themselves for the rigours of completing a degree at Rhodes University.”

The students were supported while at Gadra Matric School (GMS) to improve their marks in selected National Senior Certificate subjects and thereby gain the required University entrance points. At GMS they were also assisted to apply at Rhodes University and to secure the appropriate financial support to enroll at University. Now in 2019, 31 of them have reached their goal of graduating from Rhodes.

“This demonstrates that throughput of Gadra alumni who access Rhodes is strong and that GMS is playing a significant role in placing young people on productive career paths,” Westaway said. “In fact, the organisation is almost in a position, and will be by 2020, to claim to be the biggest producer of Rhodes graduates (in addition to being the university’s biggest feeder school).”

Eight of the graduands had attained BEd degrees and were graduating as part of the first cohort of Rhodes BEd Foundation Phase teachers.

“Many are already firmly ensconced in Foundation Phase classrooms around the Eastern Cape, hopefully setting in motion more effective Foundation Phase teaching which will ultimately have a positive impact on the public education system,” Westaway said.

Another four had completed their Post Graduate Certificate in Education, having graduated with degrees in 2018. They too would be making a contribution in classrooms around the province.

Six had attained BA degrees, three Bachelor of Social Sciences, one BMus and one BFine Arts.

“There is a gradual trend of stronger Maths and Science performance with three former GMS students graduating with Bachelor of Science degrees,” Westaway said.

Bawanile Mahlaba is being conferred with a BSc Honours degree in Water Resource Management, and Zolani Bethela and Nolutho Ncipa are getting Bachelor of Social Sciences Honours degrees. Ntsaphokazi Kondile and Miso Nosilela have completed Post-Graduate Diplomas, having graduated with their first degrees in 2018.