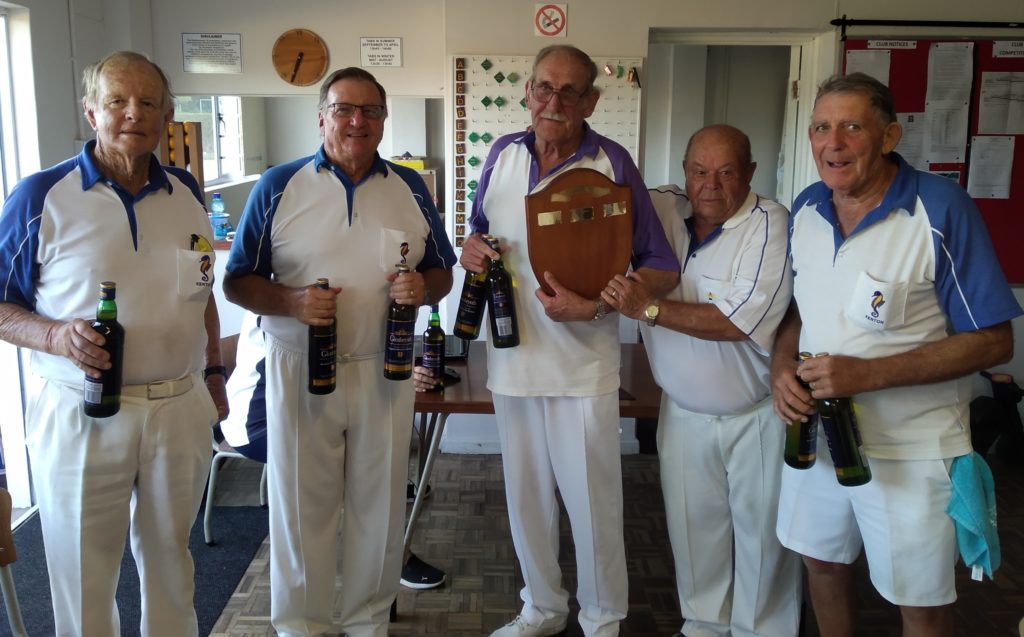 Men’s second league winners from left to right - Dennis Stirk, Richard Beresford, Stompie Bellingan, EA President Peter Ford and Ken “The Rock” Nixon. Photo: Supplied
The final days play of the Eastern Areas (EA) league took place at the Albany Bowling club in Makhanda (Grahamstown) on Sunday 3 March. In the ladies league, Makhanda went into the final day with a slender two point lead, which they managed to hold on to, to take the title and the pennant which can now proudly hang in their clubhouse.
In the men’s first league, Kowie, who shared the points five-all against Kenton in the first round, bounced back the next weekend with a very good 8-2 win against defending champions Albany.  The following weekend, making full use of their home ground advantage, they routed the then-leaders Port Alfred 10-0. This enabled them to go into the final weekend with the relatively simple task of needing only the one point from a peeled game to be crowned Champions. They did more than that, though and beat Makhanda Bowls Club 7-3 to win the 2019 league convincingly.
In the men’s second league, things were much tighter going into the final weekend with Kowie A on 21 points, Kenton on 18 and Albany on 17. Kenton won all fours of their games on the day to take a full 10 points, and it was now down to the match between leaders Kowie A and Albany.  With his last bowl of the day, Peter Stegman could only get a peel and one of the two points they needed to tie with Kenton.  As a result, Kenton were rewarded with the shield for winning the men’s Second league.
Previous ArticleBail for three in shooting case
Next Article Kingswood season ends in a draw