Bail for three in shooting case 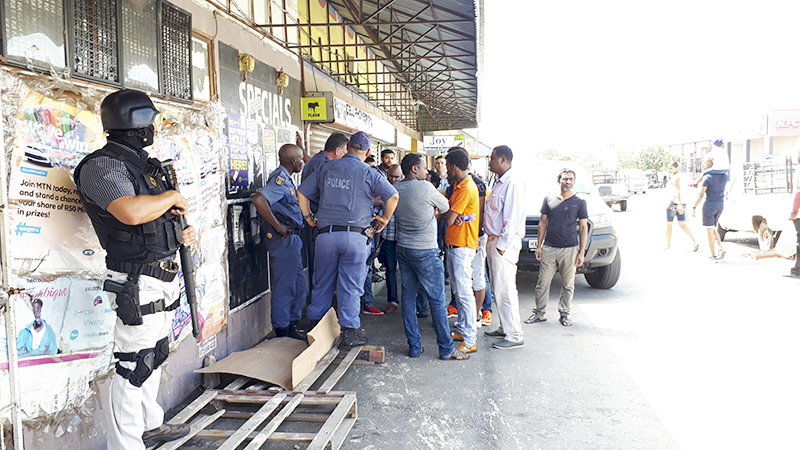 Police remained on high alert on Thursday 7 March 2019 after three men facing charges related to a recent shooting incident were remanded on bail in the Magistrate’s Court in Makhanda (Grahamstown).

Supporters of the alleged shooting victim shouted in protest as the magistrate announced bail for the three local men at R20 000, R1 000 and R2000 respectively, with strict conditions attached. The group of around 30 supporters then left the Magistrate’s Court building and headed towards the Beaufort Street premises of a relative of the first accused, where a large police contingent intercepted them. Minutes earlier, outside the court in High Street, a group had attacked with rocks a parked vehicle belonging to another family member of the first accused.

The decision was announced 10 days after the men’s first appearance, and at the end of their fifth day in court. The three men are charged with attempted murder. The first accused faces an additional charge of intimidation.

In arguing for bail, the men indicated they intended to plead not guilty. The first accused said he would be pleading self defence with respect to the alleged shooting. However, because the men have not yet formally pleaded, Grocott’s Mail will not identify them.

Their arguments included family circumstances, their status as full-time residents invested in the community and their clean criminal records. Attorney Marius Wolmarans added a number of suggested bail conditions for the first accused, including that he remain living out of town until the matter is finalised, and only comes to town on the days of court appearances.

Their bail application was supported by a petition from a group called Voices of the Women of Africa. Prosecutor Nevadia Adriaan-Daniels noted this had been signed by 240 community members.

In opposing bail the detective in the case, Sergeant Harmans, read from a counter-petition signed, he testified, by 70 people.

Magistrate Sarel Strauss, who had heard extensive testimony from the men, as well as the detective in the case, said the clean record of the men counted in their favour. None had been convicted of a crime. However Accused #3, who is 18, had a pending assault case in connection with an incident at his school. “All three are South African citizens. Accused 1 is an established businessman in the Eastern Cape and head of (and accordingly provider for) his family,” Strauss said in his bail application ruling.

The second accused, who works for Accused #1, was a breadwinner for his family. The teenager, brother to Accused #2, was at school and his education would be prejudiced by being in detention.

Strauss said in his bail application ruling, “I cannot find that there is a likelihood of the accused engaging in criminal activity if released, that they will interfere with the witnesses or the investigation of the case, or that they will not stand trial. The community’s interest in the matter and the safety of the accused are obviously also important considerations.

“In conclusion, however, I find that in the interests of Justice the accused have made out a successful case justifying the granting of bail with appropriate additional conditions.”

The R20 000 bail for Accused #1 acknowledged the seriousness of the Schedule 5 offence, Strauss said. Because the allegations against #2 and #3 were serious, they were to pay R1000 and R2000 respectively. The larger amount for #3 was to acknowledge his pending case involving alleged violence against another person.

The men’s five appearances to date have been marked by tensions, with additional police officers deployed inside and outside the court during the last two.

A group carrying placards opposing bail for the men protested outside the court ahead of the first three appearances; however, Grocott’s Mail understands that due to security concerns, they were asked to refrain from protesting outside the court.

For this week’s appearances, court security limited the number of members of the public permitted inside the courtroom.

On Tuesday, court interpreter David Mthana was joined by a translator for a non-South African language; however, Accused #1’s brother said he would translate for the court in subsequent appearances if necessary.

The matter has been postponed for further investigation and will resume in the Magistrate’s Court on 30 April.